The bronze monument created by sculptor James A. West is located in Pittsburgh's Point of View Park and depicts a meeting in October 1770 between George Washington and Seneca leader Guyasuta. Although the two men did not meet at this exact location, they did meet somewhere near the confluence of the Allegheny and Monongahela Rivers while Washington was in the area examining and surveying land. The meeting is recorded in Washington's diary and does not reveal the Seneca point of view, but according to Washington, the two men departed as friends but did not share the same viewpoints regarding sovereignty or land ownership. The sculpture was dedicated on October 25th, 2006, by Mayor Luke Ravenstahl at a ceremony attended by Pittsburgh residents and members of the Seneca Nation.

A plaque offers a short summary of the historical context behind this meeting. 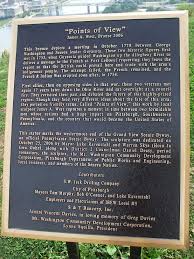 Point of View Park is often referred to as "Photography Hill" owing to the view of the city and the confluence of rivers. 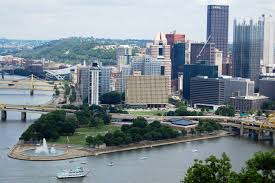 The artist depicts Washington & Guyasuta sharing their points of view above a scenic park known for its commanding view of the Pittsburgh cityscape. 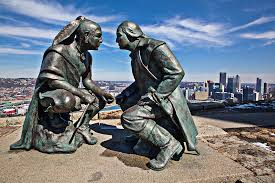 The idea for this monument originated with a meeting between James West and Lynn Squilla during research for a documentary on the French and Indian War for WQED/PBS titled “The War That Made America.” West and Squilla then took the idea for a monument commemorating the meeting to the Pittsburgh mayor at the time Tom Murphy and others. With the support of the mayor and other civic leaders, the city donated a small amount of land for a small park at a place locals often called “Photography Park” due to its view of the cityscape below. The Department of Public Works committed stones and Belgian block it had in stock for the pedestal and the Heinz History Center donated time related to researching the known details and context of the meeting. The monument was constructed at a cost of $130,000.

While sources related to the meeting are limited, historians have documented George Washington's time in the area of western Pennsylvania as a surveyor. Like many surveyors, Washington was part of an advanced guard for English expansion west of the Appalachian Mountains. Washington and Guyasuta had met before when Washington was only 21 years old when he was sent by the royal governor of Virginia to what was then known as “Ohio Country” to ask the French to abandon forts between Erie and Pittsburgh.

Washington's attempt to coerce the French failed and has been well-documented, but one lesser-known detail of the event was a meeting between Washington and inhabitants of a Native American trading village. It is believed that Guyasuta guided Washington along the Allegheny River for a short while, and it is not clear if he was with Washington prior to his encounter with the French. Washington and Guyasuta would end up on opposite sides during the French and Indian War. Seventeen years later, when the British had supplanted the French, the two men met again. This scene of two men on opposite sides of a contest for control of the region is memorialized in West’s sculpture.

While Guyasuta was endeavoring to maintain tribal sovereignty and enforce previous treaties, Washington was in western Pennsylvania in October of 1770 as a soldier and investor. Washington was looking for land to acquire, including possible plats that might be granted to soldiers as part of their promised bounty for serving the British in prior wars. Washington was 38 years old and Guyasuta was 45, and both had experienced many years of battle and sensed that more warfare was on the horizon.

Guyasuta reportedly remembered Washington from their previous meeting and offered the hospitality of a freshly killed Bison. Guyasuta also offered for Washington to camp with his people for the night. According to Washington, they sat around a campfire and had long talks with both men listening to the perspectives of the other. This conversation is depicted in the sculpture thanks in part to Washington's detailed diary entries.