The Great Camel Experiment was put into motion in 1856 when thirty-four camels arrived near this location from the Middle East. The use of camels was the idea of US Secretary of War and future Confederate President Jefferson Davis. Davis served in this capacity from 1853 to 1857. Among his early proposals to Congress was a request for funds so that the US Army could acquire and test the integration of camels into supply lines, military campaigns, and exploration. The camels were purchased at Secretary Davis's request by Major Henry C. Wayne. Wayne brought 34 of the animals to the shores of the United States here at Indianola, Texas. The camels were moved first to San Antonio before a corral (khan) was set up for them at Camp Verde. The experiment would continue over the next five years in three separate expeditions in the southern US. Davis joined the Confederacy in April 1861 which left the camels in the hands of Union leaders who less than enthusiastic about their potential value for the military. Most of the camels were sold at auction, but a few camels were found for many years roaming around Camp Verde. One of the animals were put to use by the Confederate Army as a pack animal and was known by the moniker "Douglas the Confederate Camel." The "Great Camel Experiment" was not quite the success that Davis anticipated and the use of camels was not a feature of either army during the Civil War. Instead, the shipping of camels from North Africa to the United States became a cover used as a cover by slave traders to evade the ban on the international slave trade in the late 1850s.

Horses Quenching Their Thirst, Camels Disdaining, by Ernest Etienne de Franchville Narjot. In this depiction, expeditionists water their horses, as their camels look on 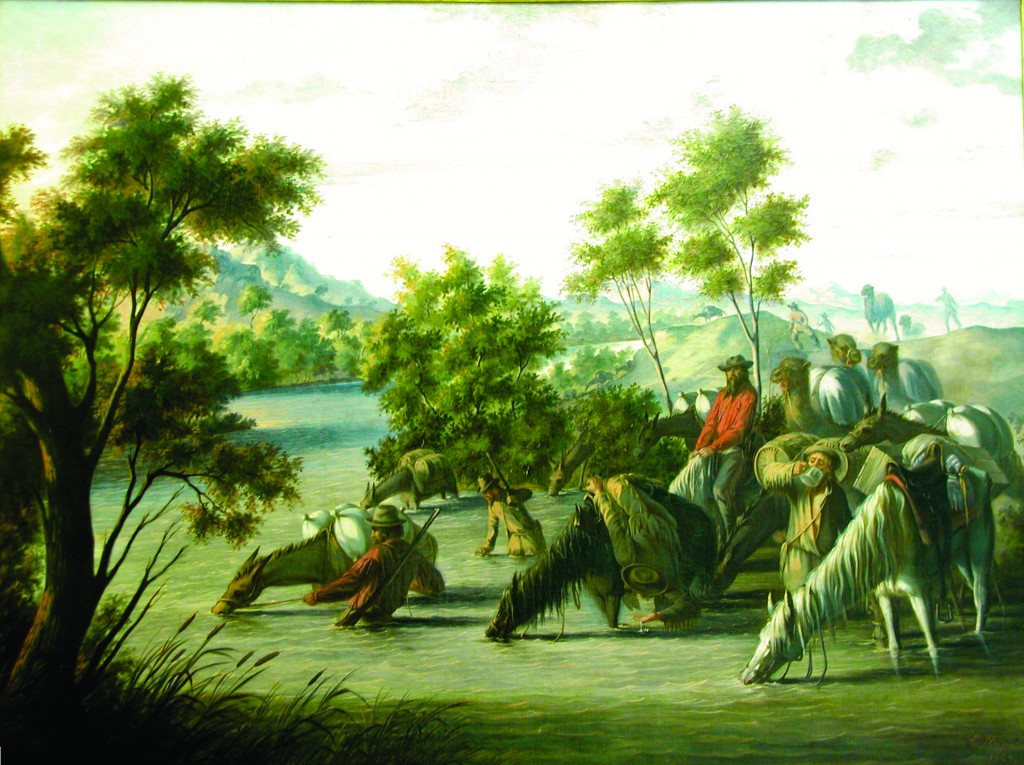 Douglas the Confederate Camel. Douglas the Camel was a token member of the 43 Mississippi Infantry until shot by a Union sharpshooter in June of 1863. 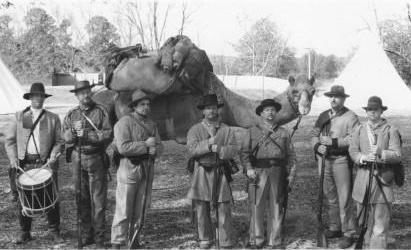 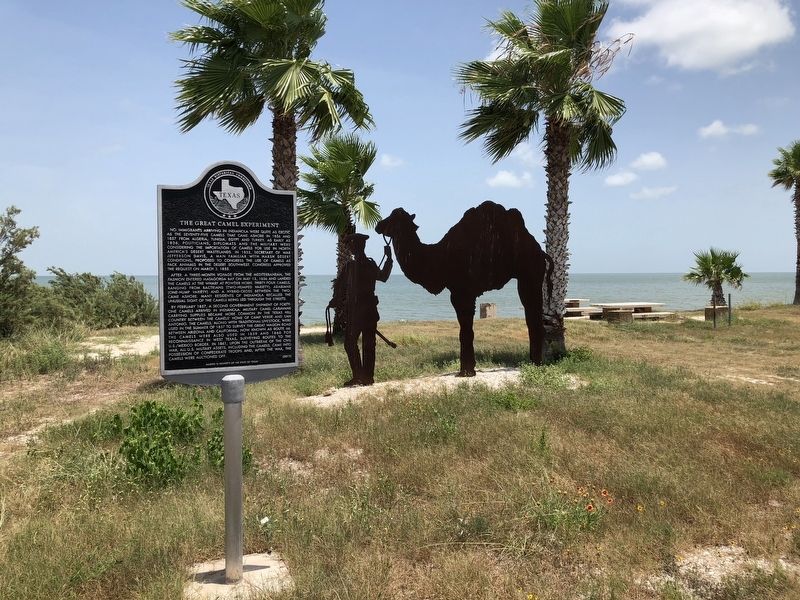 The Great Camel Experiment dates back to the 1840s when military leaders first suggested acquiring camels and observing the animal's utility as a pack animal for potential widespread use by the army. Inspired by western expansion and the need for supply lines over an increasingly vast continental empire, Lieutenant George H. Crosman wrote to the War Department of the United States and suggested that camels could be used to cross desert regions with more efficiency. This letter was ignored, but in 1847, Crosman met Major Henry C. Wayne, a fellow camel enthusiast. Wayne also wrote to the War Department but his suggestion met the same response as Crosman had experienced.

Wayne’s interest in camels caught the attention of Jefferson Davis. At that time, Davis was serving as chairman of the Senate Committee on Military Affairs. Davis petitioned in favor of the acquisition of camels for military use unsuccessfully until 1853 when he became Secretary of War. Davis wrote the following in a letter to Congress in 1854:

“I again invite attention to the advantages to be anticipated from the use of camels and dromedaries for military and other purposes, and for reasons set forth in my last annual report, recommend that an appropriation be made to introduce a small number of the several varieties of this animal, to test their adaptation to our country…”

Congress allotted $30,000 dollars and the use of the naval supply ship, aptly named Supply, to acquire camels for the purpose of discovering their potential to the US Army. Davis appointed Major Wayne as head of the experiment. Davis sailed to the Mediterranean and Egypt and Crimea to consult British officers about their use of camels during the Crimean War. The army acquired camels from the Middle East and Northern Africa before returning to the states. On that voyage home, only one camel perished but others were born during the journey. On May 13, 1856, 34 camels arrived in Indianola, Texas.

After a small holdover in San Antonio, the camels would be housed in a camel corral (khan) in Camp Verde, Texas. It was here that Wayne launched the first of several expeditions that included camels before the start of the Civil War in 1861. Initially, Wayne had a mind to breed the animals, but Davis had other ideas and sent another ship back across the Mediterranean to procure more of the beasts. In a letter to Wayne he wrote:

“The establishment of a breeding farm did not enter into the plans of the department.  The object at present is to ascertain whether the animal is adapted to military service and can be economically and usefully employed therein.”1

Three expeditions would mark the Great Camel Experiment. The first would occur in 1857 and was lead by one Edward Fitzgerald Beale, a Brigadier General in the California militia. Beale was initially dismayed with the government’s order to include the animals on his expedition from Arizona to California. He later reported that the animals were much sturdier than he initially assessed. He wrote Secretary of War John B. Floyd, (who had by this time replaced Davis) on July 24, 1857:

“….we have arrived here without an accident and although we have used the camels every day with heavy packs, have fewer sore backs and disabled ones by far than would have been the case traveling with pack mules.  On starting I packed nearly seven hundred pounds on each camel, which I fear was too heavy a burden for the commencement of so long a journey; they, however, packed it daily until that weight was reduced by our diurnal use of it as forage for our mules.”1

The second use of camels by the army would take place in the summer of 1859 under US Army lieutenants Edward L. Hartz and William B. Echols. This expedition explored the Big Bend Trail in West Texas. While the expedition was marked by severe hardships, including lack of forage and desert heat, the camels proved more adaptable to than the rest of the livestock. A similar expedition led by Hartz and Echols the following year southwest of Val Verde would be the final use of camels by the War Department. Echols had this to say about the final expedition of the Great Camel Experiment:

“The mules will not fare well, the camels have performed most admirably today. No such march as this could have been made with any security without them”4

Despite successful integration, the start of the Civil War left the camel horde largely forgotten as battles and supply lines utilized mules, horses, and railroads. Some of the animals were auctioned off while others were left to graze around Fort Hudson. Confederate troops in the area reported being somewhat amused but mostly bewildered as they tried to find a use for the animals. The Confederacy attempted to use them in postal delivery, and some were sold to traveling shows such as Ringling Brothers.

One camel was gifted to Colonel W.H. Moore of the 43rd Mississippi infantry and became a token pet for the unit. The men of the 43rd named him Douglas and found him useful as a packhorse. Douglas was noted as having been present at Battles of Iuka and Corinth. On June 27th, 1863, a Union sharpshooter killed Douglas for an unknown reason.

The Great Came Experiment was a technical success, with each expedition proving the hardiness of the animals who could eat desert plants and go without water for up to a week at a time. The Confederacy was unable to capitalize on their usefulness given the nature of the war and the potential use of camels was largely forgotten until the North Africa campaign in World War II. Camels are known for irritability and they often scare horses if left to inexperienced handlers. The experiment failed without a clear need such as a long-range desert mission. In addition, the most enthusiastic supporters, Jefferson Davis and Major Wayne, were focussed on more pressing matters. Wayne served as a Union officer while Davis became the President of the Confederate States of America.

The Great Camel Experiment remains a unique footnote in American history during the Civil War Era with little more than this landmark serving as a reminder of the attempt to use camels. As historian Michael Woods has demonstrated, slave traders began shipping camels to the US after Jefferson Davis's initial order as a cover for their illicit operations.

The marker and camel that stands beside it can be seen from the road and is part of a picnic area in Indianola, Texas. The marker consists of one permanent describing tablet and an accompanying silhouette of a Civil War soldier holding the reigns of a camel. The monument was erected in 2013 by the Texas Historical Commission. This site was selected as an approximation for where the camels disembarked from the US naval ship, Supply. The marker records the name of the ship as the Fashion, but the best sources state that the correct name of the ship was the Supply.