Dedicated in 1890, this monument features a gun battery at the location of Captain P. Douglas' battery during the Battle of Chickamauga in September of 1863. Located along a network of trails adjacent to Alexander Bridge Road, the site includes two artillery guns and two tablets. Douglas’ Battery was used in the Battle of Chickamauga by the Confederate troops in a coordinated attack against Union controlled-territory. This monument was erected by the Chickamauga and Chattanooga National Military Park Commission less than 30 years following the battle.

An image depicting Douglas' Texas Battery at an 1886 reunion. Retrieved from Sons of Confederate Veteran's at: http://www.b17.com/civilwar/scv/reunions.htm 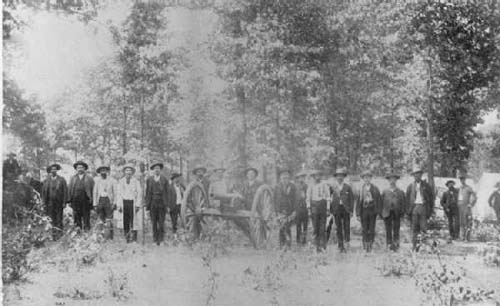 Photo by By Dale K. Benington, July 12, 2017, retrieved from: https://www.hmdb.org/PhotoFullSize.asp?PhotoID=393262 The wrought iron plaque commemorates Douglas' Artillery and the men who served in it in specific detail. 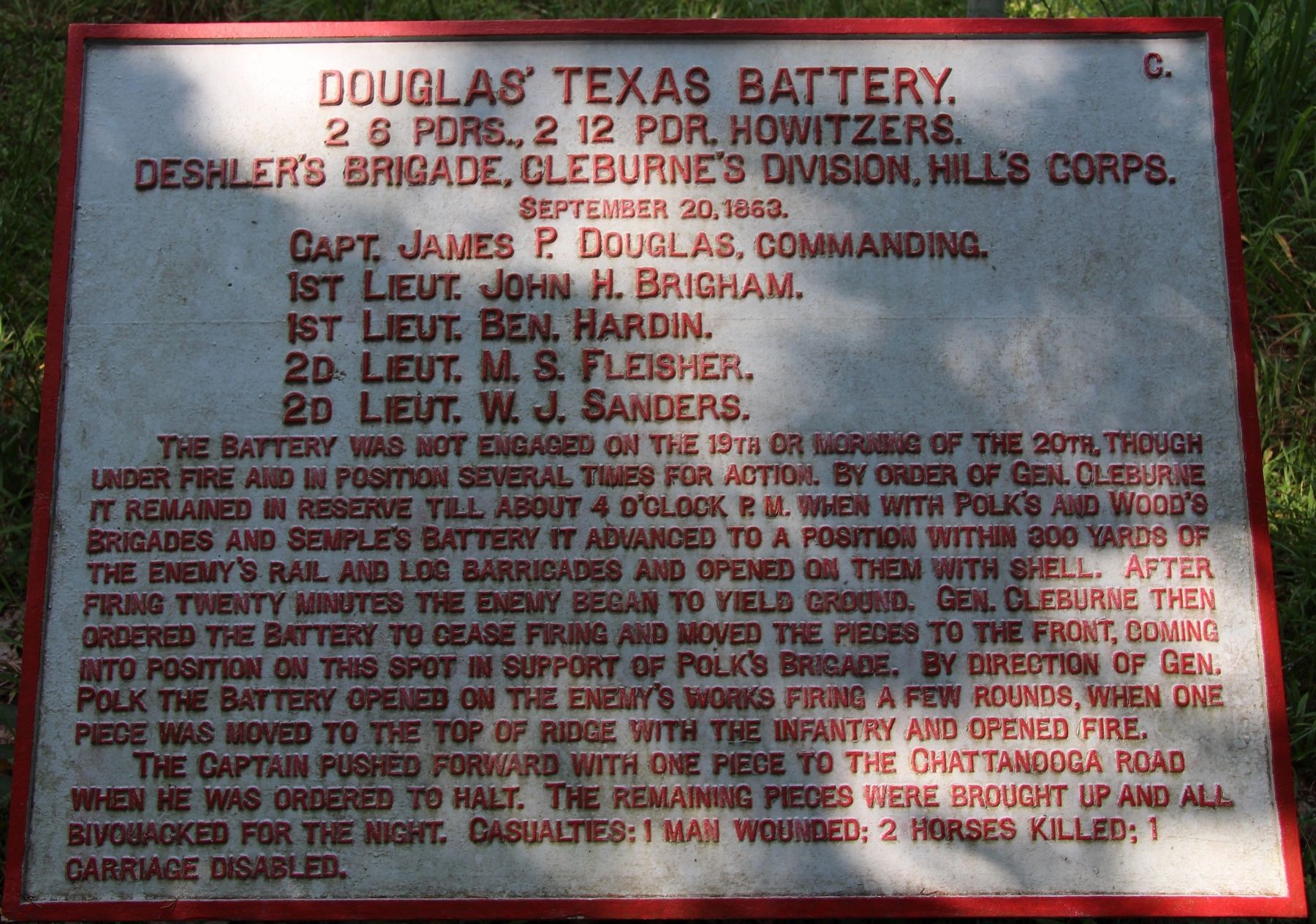 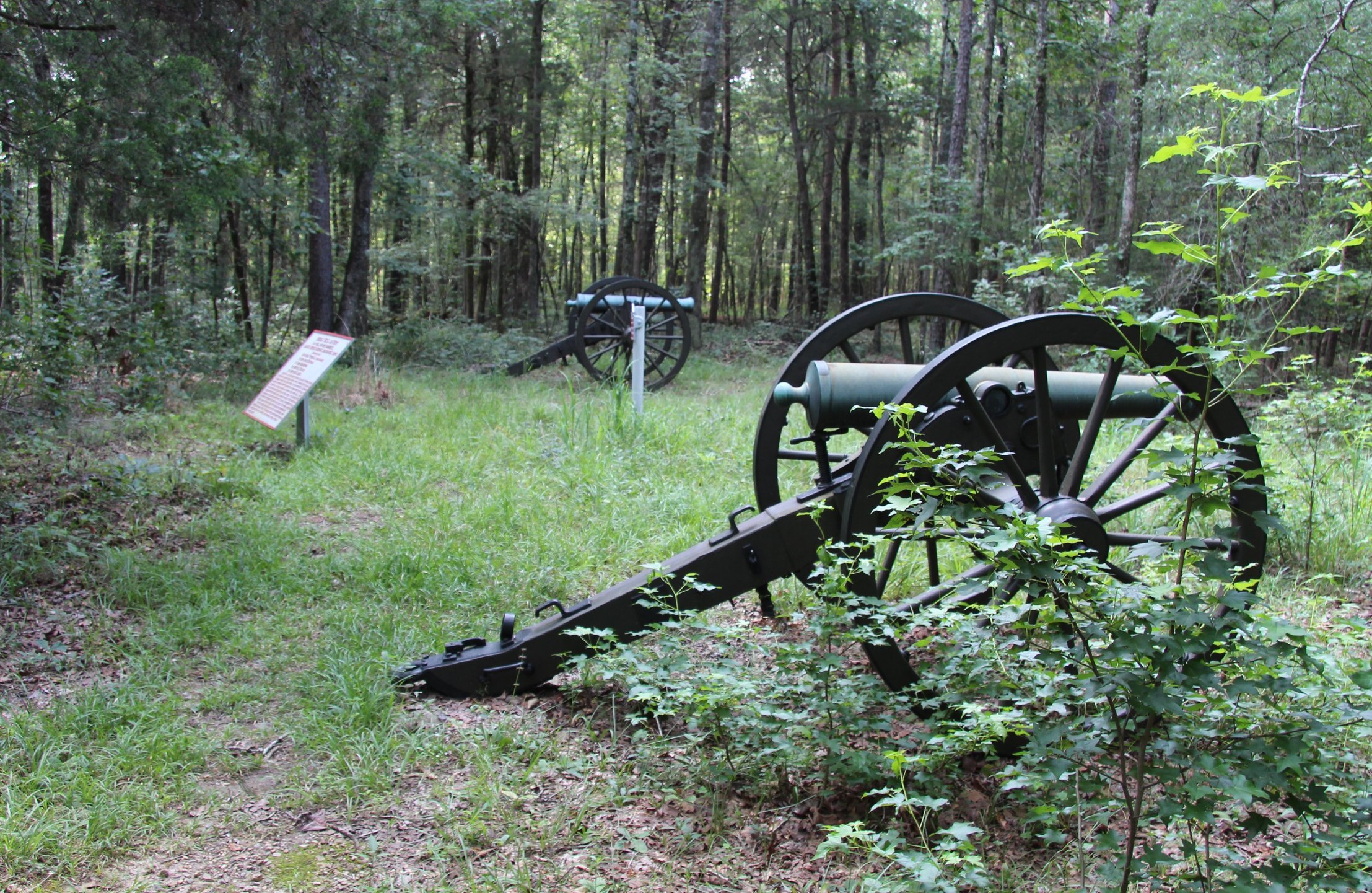 The Confederate battery positioned here during the battle was formed in Texas by two middle-class private citizens, John J. Good, and James P. Douglas. Part of the local militia, members drilled and participated in social events. Most of the original men were trained and drilled from a military artillery manual.

When the war began, Good and Tyler were offered separate commissions and began recruiting units which were combined into a single unit in Tyler, Texas, in 1861. The battery later became the Douglas Battery when John Good retired due to pulmonary issues in spring of 1862. The battery was later reorganized from a 6-gun battery to a 4-gun battery, and Douglas was promoted to the rank of Captain. The untested artillery would learn quickly alongside other units during the Battle of Pea Ridge and the Battle of Richmond. Following these battles, they were integrated into the Confederate Army of Tennessee.

In August of 1862, Douglas’ Battery provided artillery support for Cleburne's Division, of the Hill Corps that fought at the Battle of Chickamauga. The battery at that time consisted of two 6-pound cannons and two 12-pound Howitzers.

The Battle of Chickamauga involved a Confederate attempt to retake Chattanooga and its rail system after having been pushed out of the region in early September 1963. The counter-attack lead by General Braxton Bragg, with the Confederate Army of Tennessee, successfully overtook the Union Army and pushed them out of Chickamauga and into Chattanooga.

The battery was held in reserve and placed under the cover of the nearby woods until the second day of the battle, September 20th. On that day, the Douglas Battery rained cannonade upon the Union rail system and log barricades in coordination with two other batteries, Semple’s Alabama Battery and Calvert’s Arkansas Battery. Succeeding in pushing the Union back, one piece of Douglas Battery was moved to the top of a ridge and the others to the front, where they continued to support Polk’s brigade. One piece of the battery was moved all the way to the Chattanooga Road before their role in the battle was concluded.


Douglas Battery would go on to fight in General John Bell’s Atlanta Campaign. At the Battle of Atlanta, the Confederates were defeated but Douglas captured four 12-pound Napoleon guns and integrated them into the unit. Amazed at his prize he stated, “I have much the finest battery I have ever had and perhaps the finest in our army."1

This Confederate victory was followed by a defeat of Confederate forces near Nashville in December of 1864. Covering the Confederate Army’s retreat, the Douglas Battery was overrun by Union soldiers and forced to abandon all six guns to the enemy. “Our fight at Nashville was so humiliating a defeat, Douglas recalled, that I [choose to] not dwell upon it."1

The monument itself is a recreation and not original artillery that were part of the Douglas Battery. The monument was erected by the Chickamauga and Chattanooga National Military Park Commission, less than 30 years following the Battle of Chattanooga. This is one of eight similar sites erected by the Commission in the region, each located on the backtrails beside and accessible along Alexander Bridge Road.