The Frank H. McClung Museum of Natural History and Culture is a three-story museum and 267-seat auditorium located on the University of Tennessee (UT) campus. The museum was officially dedicated on June 1, 1963, thanks to the efforts of UT faculty members and archaeologists Thomas Lewis and Madeline Kneberg. In addition to public support, the museum was made possible by funds provided by Judge John Green and his wife Ellen McClung Green. The couple requested that university officials would name the museum in honor of Ellen’s father, Frank McClung. Since the museum’s opening, over one million visitors have come to the museum to see exhibits such as “The Archaeology & the Native Peoples of Tennessee,” “Ancient Egypt: The Eternal Voice,” and “The Decorative Experience.” 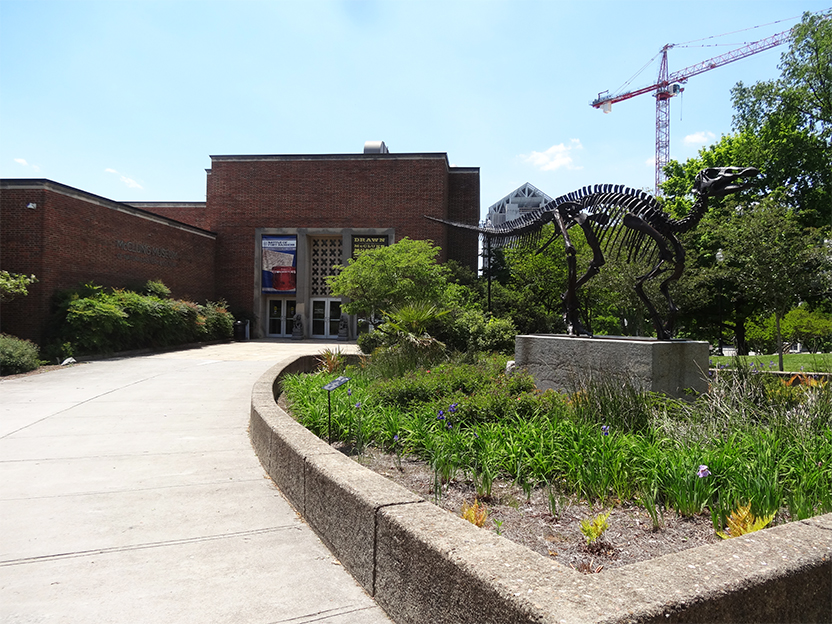 During the 1930s, archaeologists from the Tennessee Valley Authority and the University of Tennessee excavated sixty-two sites across the state. The supervisor of the project, Thomas M. N. Lewis, called for a museum to showcase their findings as early as 1937. Lewis and another archaeologist, Madeline Kneberg, led the effort to found the Department of Anthropology at the University of Tennessee. The department received gifts that added to its archaeological collections, deepening Lewis and Kneberg’s desire for a museum.

In 1955, Lewis and Kneberg’s efforts paid off when Judge John Green and his wife Ellen McClung Green donated funds to build a museum that would be named in honor of her father, Frank H. McClung. A site was chosen, and Lewis served as director with Kneberg as assistant curator until the building was completed in 1961. After their retirement, the museum’s existing collections were named the “Lewis-Kneberg Collection.” Alfred K. Guthe then took over as director, and he oversaw the museum’s official dedication on June 1, 1963. When the Department of Anthropology moved to a new building in 1971, the museum became its own separate unit in the College of Liberal Arts. It has since been accredited and reaccredited by the American Association of Museums.