Listed on the National Register of Historic Places, the Beckley Furnace Industrial Monument is the state's best preserved 19th-century iron furnace. It was built in 1847 and operated until 1919, producing high-quality iron ore for railroad car wheels. The site is owned by the state it is maintained by a group called Friends of Beckley Furnace, which offers tours on Saturdays from 10-2pm May to mid-October. The site features interpretive signs, picnic tables, and visitors are able to go inside the furnace, where temperatures reached a scorching 3,000 degrees.

The Beckley Furnace was built in 1847 and operated until 1919, long after other furnaces in the area closed. 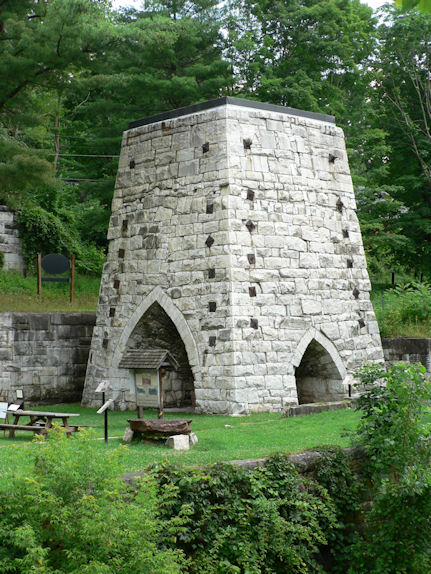 Western Connecticut is blessed with fast-moving rivers and numerous deposits of iron and other minerals. These factors made the state a major producer of iron ore; dozens of blast furnaces once operated in the region. The Beckley Furnace was built by John Beckley and William Pierce.

Despite the gradual closings of other furnaces in the area—due to factors including the need to mine deeper for iron which was costlier; charcoal was being brought in because all the trees in the area had been cut down; and the furnaces could not compete with more powerful furnaces in Pennsylvania—the Beckley Furnace was able to survive. It became more efficient, it was near railroad lines, it was modernized in 1896, and it started to use steam power. These improvements nearly doubled output. The furnace was also purchased by a large company in 1857 which also owned other furnaces in the area as well as forests in Vermont, local supporting facilities, and railway wheel manufacturers in the state and in Chicago.

The company eventually couldn't compete with the Pennsylvania iron industry and ceased operations in 1919. The Beckley Furnace was restored in 1999.