This historical marker honors Emma Rowena “Grandma” Gatewood, the first woman to hike the Appalachian Trail alone and in only one season, and was first erected in 2016. Gatewood conquered the journey in 1955 at the age of 67, successfully completing the trail in 146 days. This marker is easily accessible to the public and is found in Cheshire Village Park in Gallia County, Ohio—the county where Gatewood lived throughout most of her life. The marker was erected by the Village of Cheshire, The Ohio History Connection, and the Buckeye Trail Association—a group that Emma Gatewood was a member of, being that she was one of the founders of the Buckeye Trail. The marker is found in Cheshire Park because it is in the same county that Gatewood was from.

Pictured is Grandma Gatewood, the woman known for hiking the Appalachian Trail three times, and the Oregon Trail once. Grandma was a survivor of domestic abuse, married to a man who beat her until her face was unrecognizable, broke brooms over her he 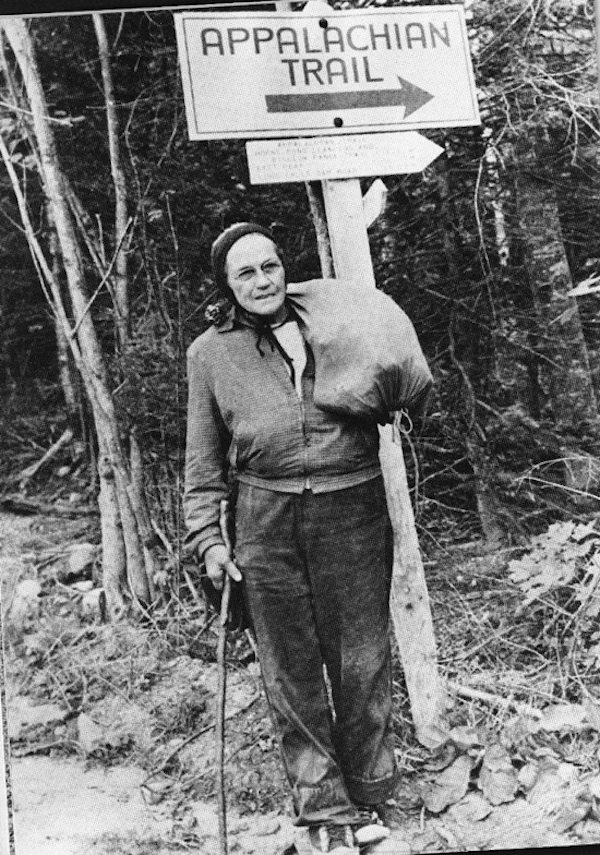 The historical marker erected in honor of Grandma Gatewood was established in 2016. It is located at Cheshire Village Park in Gallia County, Ohio. The Village of Cheshire, Buckeye Trail Association, and The Ohio History Connection collectively decide 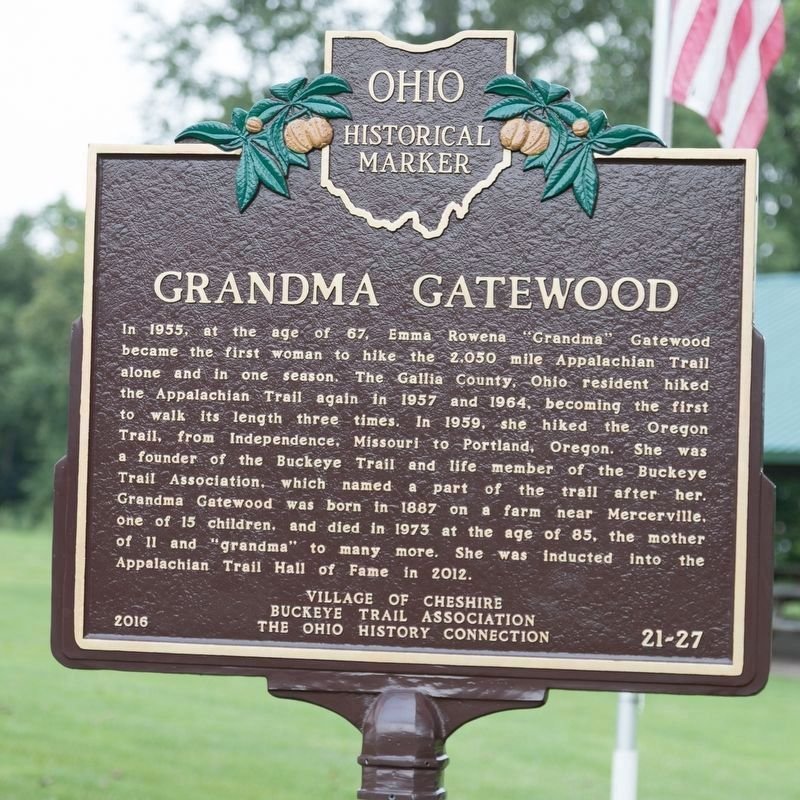 Emma Gatewood was born on October 25, 1887 in Guyan Township, Ohio. Gatewood did not have an easy life leading up to her trek along the Appalachian Trail, being a victim of domestic abuse for over 30 years, a mother to 11 children, and a grandmother to 23. Emma was repeatedly assaulted by her husband, having brooms broken over her head, being beaten until she was unrecognizable, and having her teeth knocked out and ribs broken. In retaliation, Gatewood threw a sack of flour at him, which resulted in her husband calling the police. Emma Gatewood was arrested and put in jail, until the mayor of her city noticed her scars and bruising and decided to get her out of jail, caring for her at his own home until she was well. Two years later, Emma and her husband divorced, finally freeing her from years of torment.

Years later, Emma Gatewood decided to hike the Appalachian Trail. She read in a National Geographic Magazine that no woman had ever completed the trail alone, and she wanted to be the one who did. In 1954, Gatewood tried hiking the trail for the first time. She failed and had to return home after three days, but that did not stop her from trying again. So, in 1955 she set off with a drawstring bag containing ordinary tennis shoes, a blanket, iodine, a pen, notebook, knife, band-aids, and a plastic shower curtain to protect her from the weather. She did not tell anyone where she was going, in fear they would try to stop her. She ran on Vienna sausages, greens she found along the trail, meals from strangers, and peanuts and raisins. When it was time to sleep, Gatewood would go under a picnic table, on someone’s porch swing, or anywhere decent that she could find. She was often interviewed when spotted by the media, as she was becoming very popular—many keeping up with her journey on television and in newspapers. Five months after beginning her trip, Emma Gatewood arrived at the end of the Appalachian Trail. Covering approximately 14 miles per day, Gatewood's 2,000-mile plus trek was finally complete. She hiked up Mount Katahdin and added her name to the registry of hikers who finished the trail.

After Gatewood successfully completed the hike, she decided to do it again—twice that is. She hiked the Appalachian Trail for the second time in 1957, becoming the person to ever hike it twice. Then, for the third time in 1964, becoming the first person to hike the trail three times. It is believed that Emma Gatewood’s travels on the trail gained it much publicity, bringing about improvement of the trail, resulting in restoration and much needed repairs. Without her famous hike, some think that the trail would have become rundown and unusable. Gatewood was vocal about the poor trail conditions, such as unkept trail sections, leading to confusion and more difficult travel for hikers. Due to her publicity, this triggered a push to fix the trail so that those inspired by Gatewood could try out the trail for themselves. Today, the trail is still the same length as it was when Emma hiked it, but is now much more taken care of and widely used.

Between Emma's second and third Appalachian Trail hike, she ventured elsewhere—the Oregon Trail. In 1959, Gatewood took on the approximately 2,000-mile hike all on her own. She began in Independence, Missouri, and ended in Portland, Oregon.

Nearly a decade after her third hike, in 1973, Gatewood passed away in her home in Gallipolis, Ohio. She was 85 years old and left an inspiring story behind. Even after her death, Emma Gatewood was still recognized and remembered. She is now commonly referred to as "Grandma Gatewood". In 2012 she was inducted into the Appalachian Trail Hall of Fame. Then in 2015, a documentary was created focusing on her life and her success on the Appalachian Trail. This documentary is titled “Trail Magic”, directed by Peter Huston. The documentary was an EMMY award nominee and helped to further spread the success story of Grandma Gatewood. A year later, author Ben Montgomery published a book about Grandma. Titled “Grandma Gatewood’s Walk: The Inspiring Story of the Woman Who Saved the Appalachian Trail”, the book talks about Gatewood’s life, hike, and also how she helped the trail survive.

Grandma Gatewood, after years of struggle, ended up accomplishing a huge task—hiking the Appalachian Trail three times and the Oregon Trail once—all between the ages of 67 and 76. Even after her death, she has still remained a well known and respected historical figure. Visitors of the Buckeye Trail will find a section named after Grandma, and many avid hikers still remember her today.

Bugge, Cass. The Great-Grandma Who Changed the AT Forever. Outside. April 20, 2017. February 10, 2019. https://www.outsideonline.com/2174996/grandma-who-changed-forever. Description of Grandma's life and hike