The "Breslin War Memorial" is a memorial erected by two local business owners, Pat and Sandy Breslin, who were strong supporters of US troops during WWII. When they lost the lease on their fishing business in Belmar, they had the memorial donated to Fort Monmouth, once an active military base in Monmouth County. After Fort Monmouth closed, the memorial was relocated to its original home in Belmar and can now be visited on the 9th Avenue Pier in this beach town of New Jersey.

This is an image of the memorial when it was at Fort Monmouth. Picture taken from https://www.army.mil/article/34903/memorial_with_rich_history_leaves_fort_monmouth 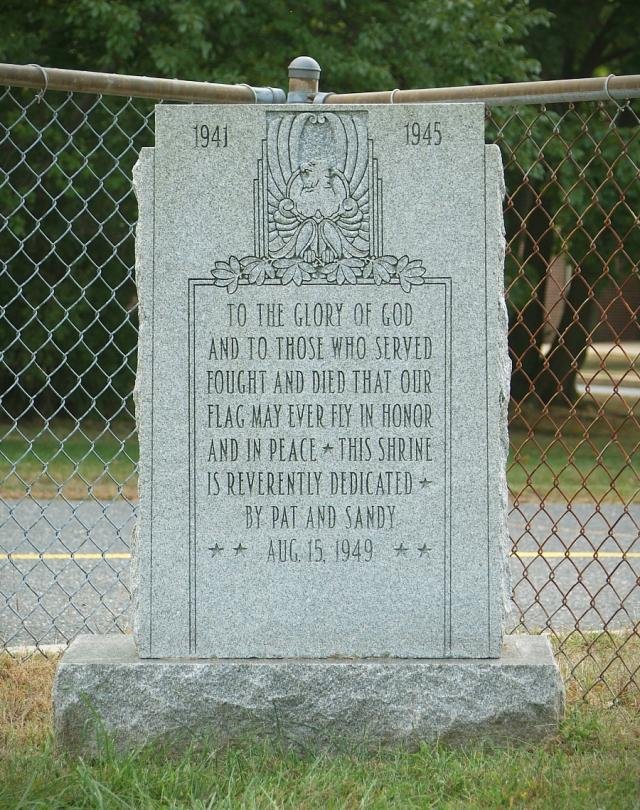 This is the memorial in Belmar at its current location. The image is taken from https://www.hmdb.org/marker.asp?marker=37972 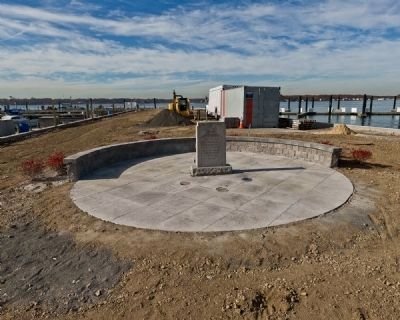 This is a close up of the Breslin Memorial as it is home in Belmar from the website https://www.hmdb.org/marker.asp?marker=37972 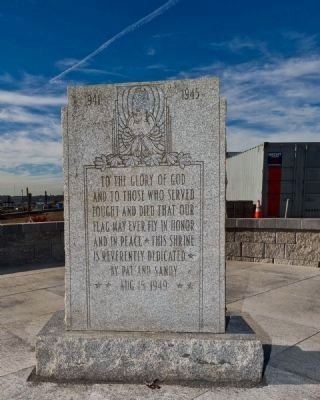 The Breslin War Memorial is a modest monument near the Belmar Marina in Belmar, New Jersey.  Originally erected in 1949, it stands in remembrance of the fallen soldiers during World War II and beyond.

The inscription on the memorial reads:

“To the glory of God and to those who served fought and died that our flag may every fly in honor and in peace.  This shrine is reverently dedicated by Pat and Sandy Aug 15, 1949.”

The monument's story starts with Pat and Sandy Breslin in the 1940s.  This couple lived in Belmar, New Jersey, and owned a local restaurant and dock which included boats and fishing materials.  When the US military base of Pearl Harbor in Hawaii was attacked by the Japanese on December 7, 1941, the Breslins vowed to support their men and women in uniform.  This oath guided their decision to allow any individual in military uniform, regardless of race, creed, color, or sex, to have a free meal at their local restaurant.  Furthermore, the dock, including its 150 boats, bait, fishing equipment, and any other available resources, were also available at any time for uniformed individuals free of charge.  The couple even extended the use of their telephone to the soldiers, enabling these servicemen and women to call home.  The open arms of this couple impressed many individuals and created a strong support base for many soldiers in the New Jersey area, particularly those based out of Fort Monmouth.

This support for the military continued throughout the wartime era and into the period of peace, and eventually earned the couple national recognition.  The Breslins were gifted the flag that flew over the Capitol on D-day and in 1953, they were even visited by the president of the United States, President Dwight Eisenhower.  They also received a medal in 1954 from Archibishop of New York and Apostolic Vicar for the U.S. Armed Forces Francis Joseph Cardinal Spellman. The Breslins were not motivated by fame nor recognition, but rather due to a fervent and deeply-rooted sense of patriotism. They acted out of a sense of duty, doing all that they could to help serve those who served their country. Their patriotism and sense of duty, which inspired the dedication of the memorial to the fallen soldiers of the United States, is truly remarkable.

The Breslins kept the memorial on their property until 1957, when the lease for their land expired and was not renewed. This required the relocation of the memorial from its home in Belmar, New Jersey.  After petitioning the President and contacting the US Army, an agreement was reached that the Memorial would be received at Fort Monmouth, an active duty military base some 25 minutes away.  This new location lasted from the 1960s to 2011, upon the closure of Fort Monmouth, where it was returned to Belmar, its original location.

This memorial now stands as a tribute to the fallen, and to Pat and Sandy- and all those like them who support our troops.