Africatown was created by passengers of the last slave ship to import Africans into America. This ship, the Clotilda, brought 103 Africans into Mobile Bay in 1860. These would-be-slaves created a community that survived the end of slavery, the Civil War, and Reconstruction in the deep south. 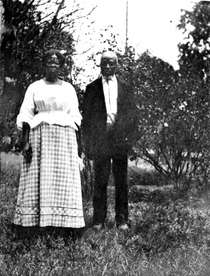 Zuma and her grandchildren, 1912 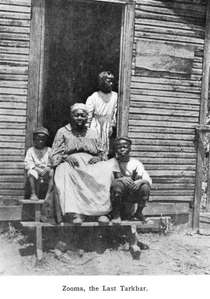 The Clotilda imported slaves into Alabama fifty years after the international slave trade had already been abolished.  In the 1850s the deep south needed more workers.  Planters in the deep south bought slaves from the upper south, but they would have preferred to reopen the Transatlantic slave trade because slaves from Africa would be cheaper.  Supposedly the journey of the Clotilda may actually have started on a bet between a man who thought it impossible to sneak a slave ship in under the noses of federal authority, and a man swore he could sail a slave ship straight into Mobile Bay.  The man in charge of the operation, Timothy Meaher did avoid prosecution by hiding the slaves and disposing of the ship.  Meaher was also considered something of a hero by his peers at the time for taking the law into his own hands and helping planters in the deep south access cheaper labor.  It is somewhat comforting to know that the slavers of the Clotilda did not make as much profit as they might have in another time because slavery was abolished just five years later, in 1865.

The passengers of the Clotilda were about half adults and about half children and teens from Benin in West Africa.  This reflects the thinking at the time that slavery would continue, so children were a reasonable investment.  One teenager upon the ship was Cudjoe Lewis, or Kazoola.  He was 19 at the time and was the longest living among the last imported slaves from Africa.

The passengers aboard the Clotilda, along with other tribesman whom they reunited with in America, first regrouped in Northern Alabama.  They initially attempted to go back home, but were unable to arrange such a journey.  Next, they asked the government to provide them with land, reparations for the hardships they had endured illegally in America as part of the slave trade.  They were denied.  Finally, the group worked and saved money until, with their resources pooled, they could afford to buy some land in 1870.  Once they owned the land it because community land among them, rather than belonging primarily to those who provided the most money.  Men worked in Mobile industry such as for mills, women sold produce in order to keep the community going.  As a community they maintained their language, arbitration system with a chief, and even saw their own African doctor.  Children born in this new community known as Africa Town received both African and American names.  Surprisingly they did not any recorded acts of violence and seem to have been thought of primarily as a curiosity by the occasional journalist.  While maintaining their heritage, the community of Africatown also became quite American in some ways such as use of the legal system, voting in 1874, becoming Christian, and joining the Freedman's Bank.

Cudjoe Lewis became the best known inhabitant of Africatown both because he lived into his nineties and because he was especially outgoing.  He gave many interviews about Africatown and about life in Africa, warring tribes, and how he and others were sold into slavery.  Because he died in 1935, he still has living descendants and there are still people who knew him personally involved in Africatown today.  Today, a fifth generation of the original descendants still live in Africatown.  The grounds still have the original cemetery, church, and even trees planted by the founders.

The grounds were added to the National Register of Historic Places in December of 2012.