Falling Spring Falls, located in Alleghany County, Virginia, is the site of a waterfall that once stood 200 feet high, with its beauty recorded by Thomas Jefferson. While it was once higher than Niagra Falls was at the time, in 1780, it now stands at 80 feet tall, due to destruction caused by mining for a specific type of limestone created by the carbon dioxide in the falls. One of four thermal springs in the area, Falling Spring stays around 85 degrees year-round, an effect caused by rocks under the falls from over two million years ago. Now, the site is a tourist attraction maintained by Douthat State Park. 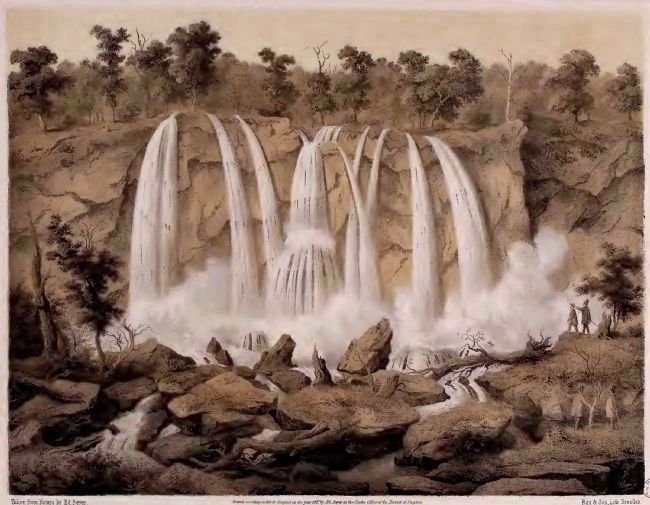 Falling Spring Falls from the bottom 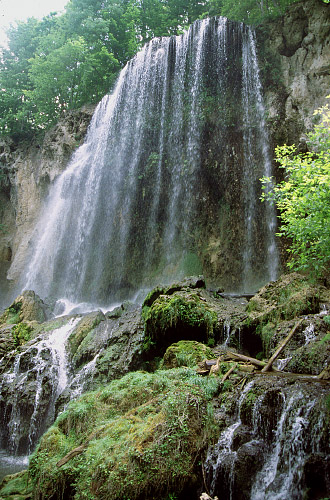 Close-up of the historical marker for Falling Spring Falls 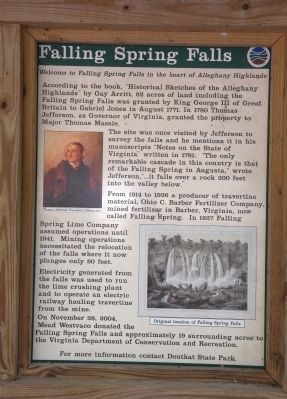 Falling Spring Falls is located in Alleghany County, Virginia on the eastern side of the state. Many people believe that the waterfall does not have an age, but scientists disagree, with a theory that the waterfall is around two million years old. Originally, 82 acres of land, which included Falling Spring Falls, was granted by King George III of Great Britain to Gabriel Jones on August 1771. In 1780, Thomas Jefferson, who was then governor of Virginia, gave the property to Major Thomas Massie. After visiting the falls, Jefferson wrote about the site in 1781, claiming it was the “only remarkable Cascade in this country,” (1).

At the time of Jefferson’s visit, Falling Spring Falls stood 200 feet high, higher than Niagra Falls at the time. It was also likely the highest waterfall in the Appalachian Valley. However, due to the intervention of people, the waterfall is now less than half that height, at 80 feet tall. This intervention was caused when people tapped the source for a special limestone called travertine. The stream to the falls flows out of a cave, releasing carbon dioxide. As the water fills with carbonate, even more of that carbon dioxide is released as the water flows over the falls. The carbonate is then deposited as the travertine.

From 1914-1926, the Ohio C. Barber Fertilizer Company began mining the travertine in Barber, Virginia, which is now Falling Spring. The central source of the limestone was Falling Spring Falls, and soon after, from 1927-1941, another company, Falling Spring Lime Company, took its place. Additionally, the mining companies used the water from the falls to generate hydroelectric power. The power they produced was in turn used to sustain a plant to process the travertine they extracted as well as an electric railway to haul it. Eventually, the constant battery significantly reduced the size and original magnificence of the waterfall.

Even so, what is left of the waterfall remains as a busy tourist attraction in Virginia due to its history and beauty. The water remains around 85 degrees year-round, warmed by an underground intrusion of igneous rock called pluton that was formed two million years ago during the Tertiary period, and has been slowly cooling since that time. The Falling Spring Falls is the southernmost waterfall of four thermal springs in the area, the other three being Warm Springs, Hot Springs, and Healing Springs. The area also includes a historical marker with information about “Mad” Anne Bailey, who had a nearby cabin, and was known as a pioneer heroine of the Great Kanawha Valley. In 2004, Mead Westvaco donated the waterfall and the 19 acres of land surrounding it to the Virginia Department of Conservation and Recreation. Now, it is maintained by Douthat State Park.

By Dean Walton, courtesy of the Virginia Department of Conservation & Recreation