An aerial view of the Huff Archaeological Site. 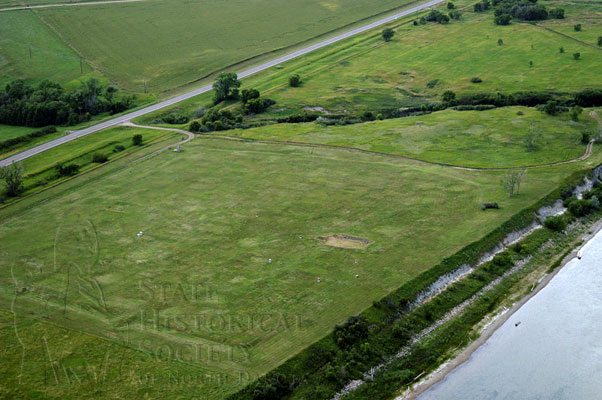 Archaeologist team excavating a house at the Huff site. 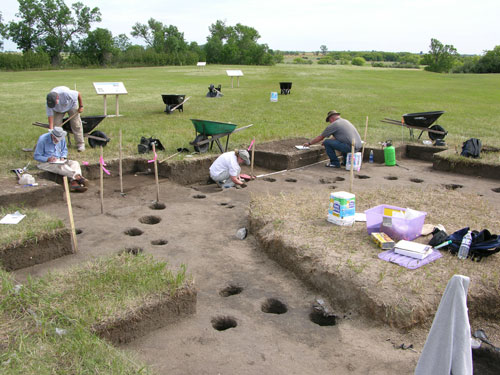 The village that was located on the Huff site is dated to 1450 AD, which puts at around two hundred years before European influence entered the region. The site is in pristine condition with much of it undisturbed. This is largely because of the US Army Corps of Engineers, who assisted in stabilizing the nearby river bank in the 1960s during excavation.

Roughly 103 housing structures made up the village and it's believed upwards of 4,000-5,000 trees or posts were used in its construction. Signs of a shifting architectural mindset can be seen in the one house that wasn't in a long, rectangular shape. This house was a shorter square shape with rounded edges. In total, the village spans twelve acres and has a layout akin to most Mandan settlements with a central plaza and a ceremonial structure that would open into this plaza.

To defend themselves from conflicts with other tribes or villages, the Mandans constructed a 2,000-foot long ditch that guarded the village on the three sides. Though the ditch is only two feet deep and fifteen feet wide, it was probably a much larger and more imposing fortification for possible attackers. There's also a wall surrounding the village which consisted of 2,500 closely-spaced posts and ten bastions on the village corners.