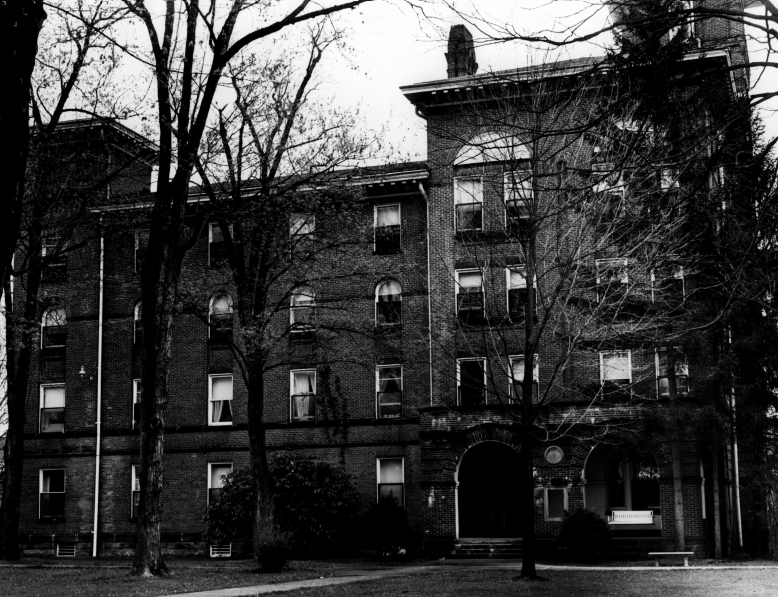 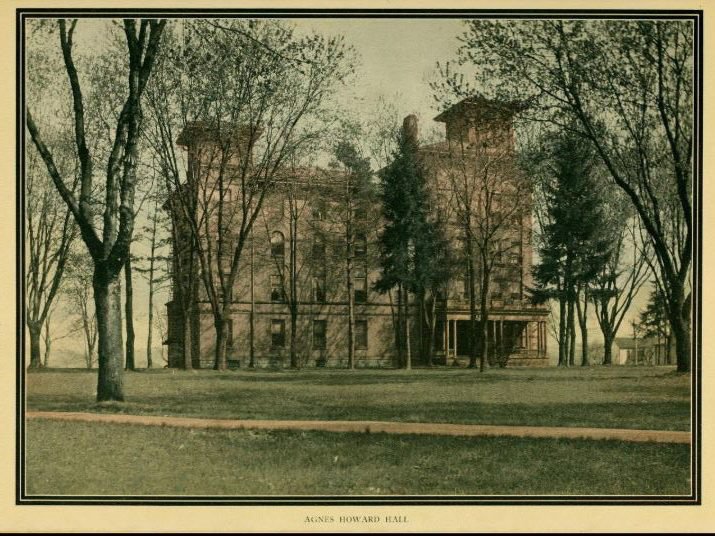 Agnes Howard Hall is a women’s residence hall at West Virginia Wesleyan College, and thought to be the oldest dormitory of its kind in the state of West Virginia, being constructed in 1895 [1]. The desire for a female dormitory at West Virginia Wesleyan College was first introduced in 1892 by then president B.W. Hutchinson as a solution to the problem of housing students in the homes of residents of Buckhannon, WV, many of which did not have electricity or a municipal water supply [2].  A plan for the dormitory was sent to architect Mr. M.F. Geisey, of Wheeling, WV. Construction began in 1894, with the building’s completion in the summer of 1895 [2]. The total cost of the building was $25,000 at the time of its original completion [1].

In 1920, the name was changed from Ladies Hall to Agnes Howard Hall. Agnes Howard's father was a trustee at the school, and her mother (Audree Ford) had lived in this building when she was a student - graduating from the West Virginia Conference Seminary in 1896. Her parents made donations in her memory which helped the building to be enlarged and renovated.

During World War II Agnes Howard Hall was used by the local community, and housed the 49th College Training Detachment aircrew [1].  An addition to the building was completed in 1929, with the building’s name switching from “Ladies Hall” to “Agnes Howard Hall” in 1920, in honor of Agnes Howard, a former student at the college [2].

Agnes Howard Hall has been seen as a “House of Dreams: dreams of scholarship, womanhood, and Christian attainment. [1]” The “atmosphere” of the building is something which is often mention in historical documents and texts, as well as in student testimonials.  The building has been referred to as “dignified” and a publication from the college in 1913 contained the following quote: “No girl is ever the same after having lived in ‘The Hall.’ Thenceforth, she is a dweller in another world, a world peopled with choice spirits and filled with fragrant memories from which she cannot, and would not, escape. [1]”

The architectural design of the exterior of the building is late-nineteenth-century Victorian eclectic, with some Italianate features [1].  The building was originally designed to accommodate about 60 students [2], but now has accommodations with 77 sleeping rooms, 26 bathrooms, and several parlor/lounge room areas [1].  The additional capacity was largely due to renovations in the 1920s, financed by C.D. Howard, in memory of his daughter Agnes Howard [1]. Agnes Howard was born on September 9th, 1900, and entered into school at Wesleyan in the fall of 1916 [3].  This was following improvement from rheumatoid arthritis. Agnes’s condition worsened in the winter, and she passed away in December of 1917 [3]. In life she was described by her sister as fun-loving and outgoing [3].

Several renovations of the interior of the building have occurred over the years, with the original electrical work upgraded in 1952, along with improvements on the plumbing in the building.  The plumbing original to the 1895 section of the building included two wells (for kitchen and drinking water), as well as a windmill to provide power for the water pump, which moved well water to a lead basin on the fifth floor of the building [1].

The dormitory has served many purposes throughout the years, including serving as space for classrooms following the college Seminary Building fire in 1905 [1]. The building housed recreation and formal dining rooms for the women who lived there as well [2]. Rooms on the first floor of The Hall are currently being used as office space for the theatre department on campus.  Through its diverse history, the building has maintained many of its architectural and design qualities which lend to its significance. This includes a chestnut main staircase, as well as several parlor and lounge rooms on the first floor. The brick and stone porch was most likely added during the construction of the addition in the 1920s [1], and is still used as a place for study and socialization by students.