Church of the Crossroads

Honolulu's Church of the Crossroads was established in the 1920s and this building was designed in 1935. The building is listed on the National Register of Historic Places owing to the church's close association with the twentieth-century social history and ethnic diversity of the city. As a result of decades of immigration, trade, and missionary work, the church administered to a congregation of diverse English-speaking residents of the city. The church's architecture draws from several international influences, representative of the church's mission to cater to English-speakers of various ethnic backgrounds while also reflecting the local community. 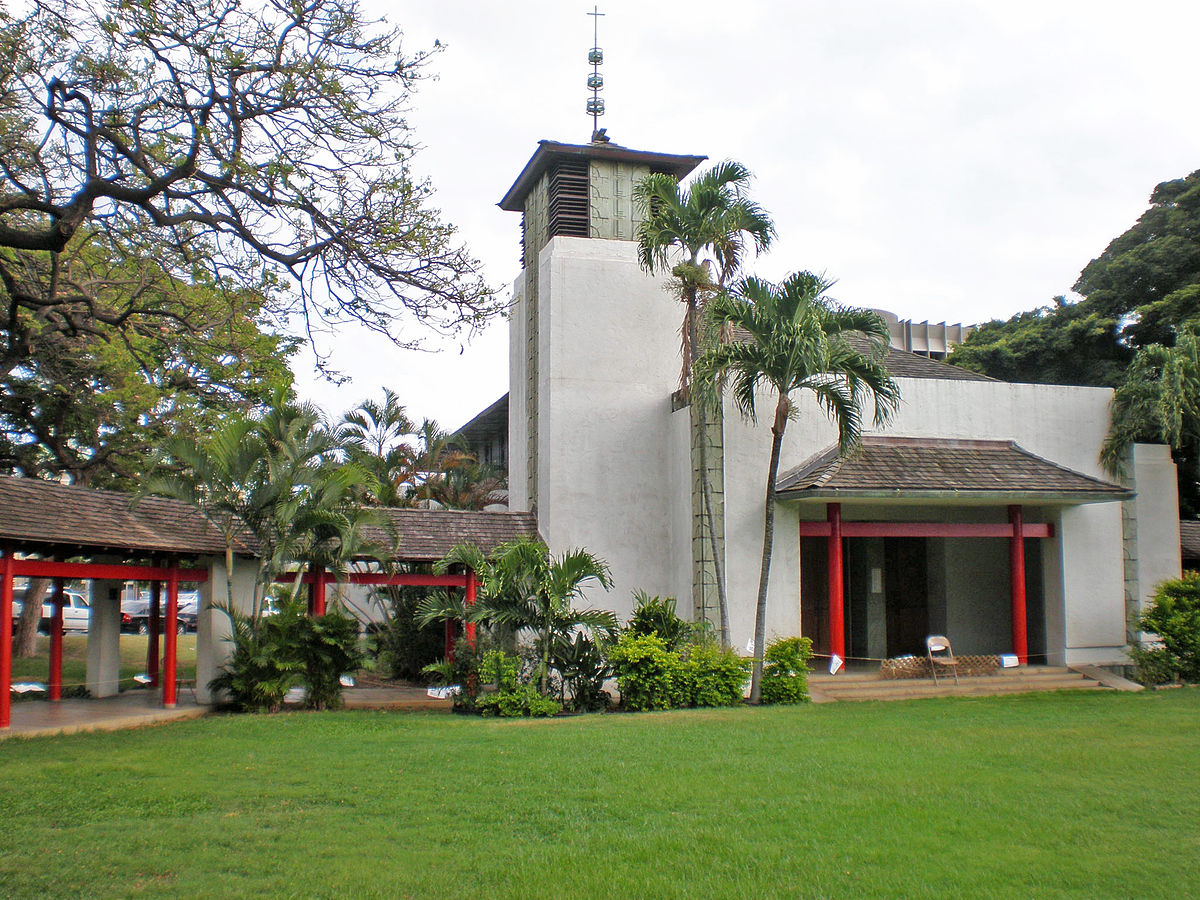 The Church of the Crossroads was founded in 1923 by students of the Mid-Pacific Institute and of McKinley High School with the goal of creating a diverse and multi-racial congregation. The historic church building was designed in 1935 by Claude A. Stiehl, whose design represents the island's (and congregation's) ethnic diversity by combining features of Asian, European, and Hawaiian architecture.
The church evolved from a meeting held in 1922 at the Nuuanu Y.M.C.A whose attendees sought to establish an organized service of worship catering to all races of English-speaking youth on the island. One year later, the Church of the Crossroads formed with a mission to foster community interaction and embrace a multi-racial assemblage. Indeed, the church regularly opened its space for community functions and those associated with The Church of the Crossroads actively participated in numerous community-focused activities.
The church's charter members included a student of Mid-Pacific Institute, a school founded to "Americanize and Christianize" native Hawaiian children, as well as a student from President William McKinley High School, where Japanese-Americans comprised two-thirds of the student body. At a time of intense division, the founders, early pastors, and the staff were unique in their greater appreciation for ethnic diversity than was common among the growing white population. The church's architecture, which combines characteristics of Asian, European, and Hawaiian architecture reflects the congregation's diverse ethnicity of the congregation.
The church complex is the masterwork of architect Claude Stiehl, one of a number of architects who came to work in Hawaii in the 1930s. Stiehl graduated from the Art Institute of Chicago and Armour Institute of Technology with a degree in architecture. He also studied abroad in England, France, and Germany. From 1929 to 1932, Stiehl worked both in Hawaii and California before he finally returned permanently to Honolulu. He worked on residential properties, as well as designing the Hawaii Performing Arts Theater in Manoa, Hemenway Hall at the University of Hawaii, Halekulani Hotel and Kamehameha Schools. As is the case with the Church of the Crossroads, his designs are regarded for their mixture of styles that seek to reflect Hawaii's mixed ethnic heritage.
In fact, the church represented the complex nature of Hawaii's cultural and social history from the 1820s through the early 20th century. Western missionaries arriving during the nineteenth century brought not only Christianity with them, but the English language and an entirely different philosophy on laws and values.
Moreover, by the 1850s, the islands increasingly served as a maritime way station in the heart of the Pacific Ocean. Hawaii welcomed ships sailing to Hawaii from around the world, mostly for trade but also for bringing in travelers and immigrants that ranged from laborers to entrepreneurs -- most of whom sought to commodify the Hawaiian soils with contract farming for profit (instead of the traditional, family-managed subsistence farming).  Over time, Native Hawaiian traditions, language, and religion gave way to influences from those coming from Asia and the Americas (notably the U.S.).  Thus, for the Church of Crossroads to focus its services towards English-speakers of various backgrounds speaks to the decades of immigration that profoundly changed Hawaiian culture, religions, economy, and politics.

Church of the Crossroads: By Joel Bradshaw - Own work, Public Domain, https://commons.wikimedia.org/w/index.php?curid=6811489