The current lighthouse at Diamond Head was constructed in 1917 and replaced the original lighthouse built at this site in 1899. The lighthouse is still in use and also serves as a reminder of the essential role of maritime trade to the growth of Hawaii's economy during the late nineteenth century. This trade led to significant changes in the political and social history of the island, including the effort by American business leaders to seize control of the island as part of the annexation of Hawaii by the United States in 1898. Prior to the completion of the first lighthouse, a system of bonfires and lookouts was utilized as an aid for navigation. However, these actions were far less effective, and two major shipwrecks in the 1890s led to a push for the construction of this lighthouse. The name of this part of the island was the result of a mistake by British naval officers who mistook crystals for diamonds on the slopes of the nearby volcanoes. 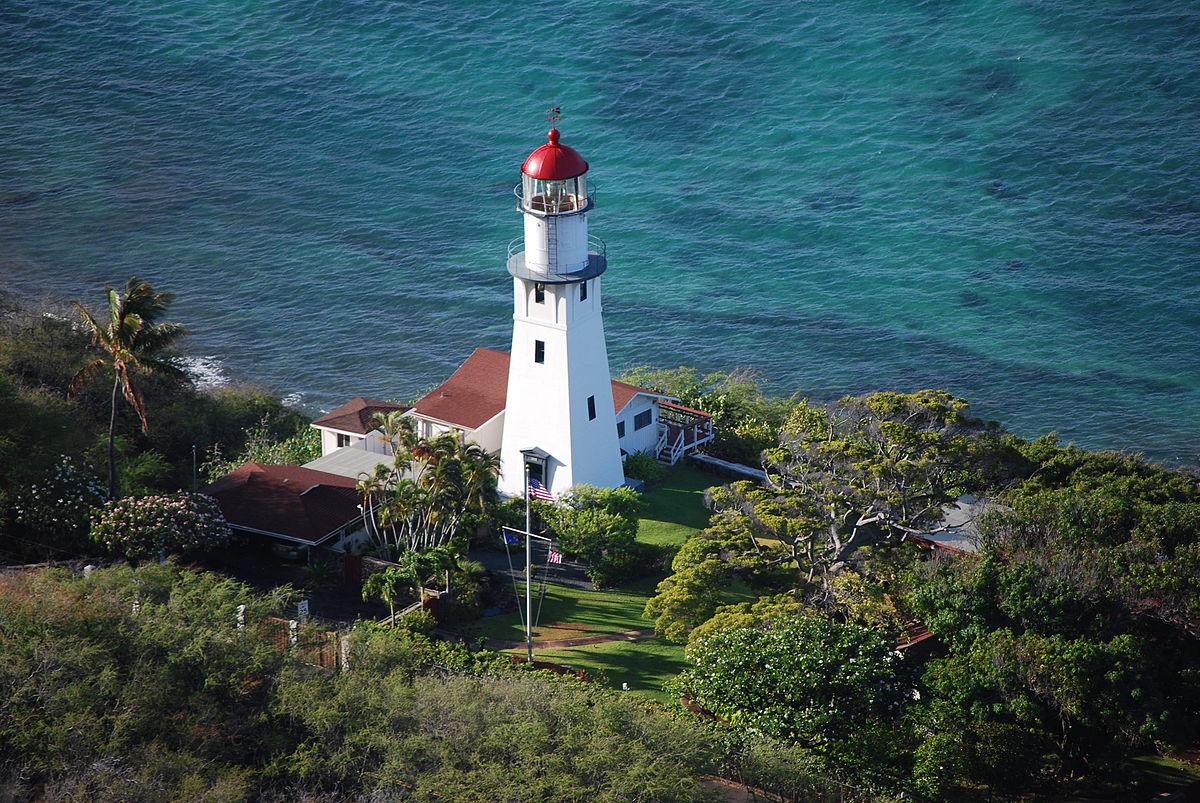 The Diamond Head Lighthouse was featured in a stamp in 2007. 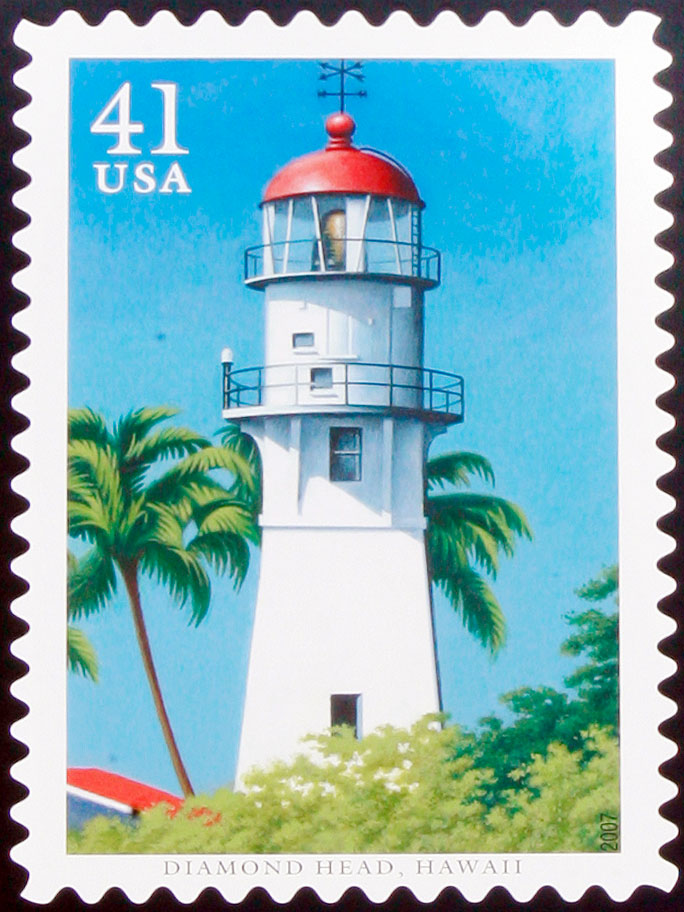 The Diamond Head Lighthouse sits atop a rather imposing cliff. Photo from Hawaii Photography Tours 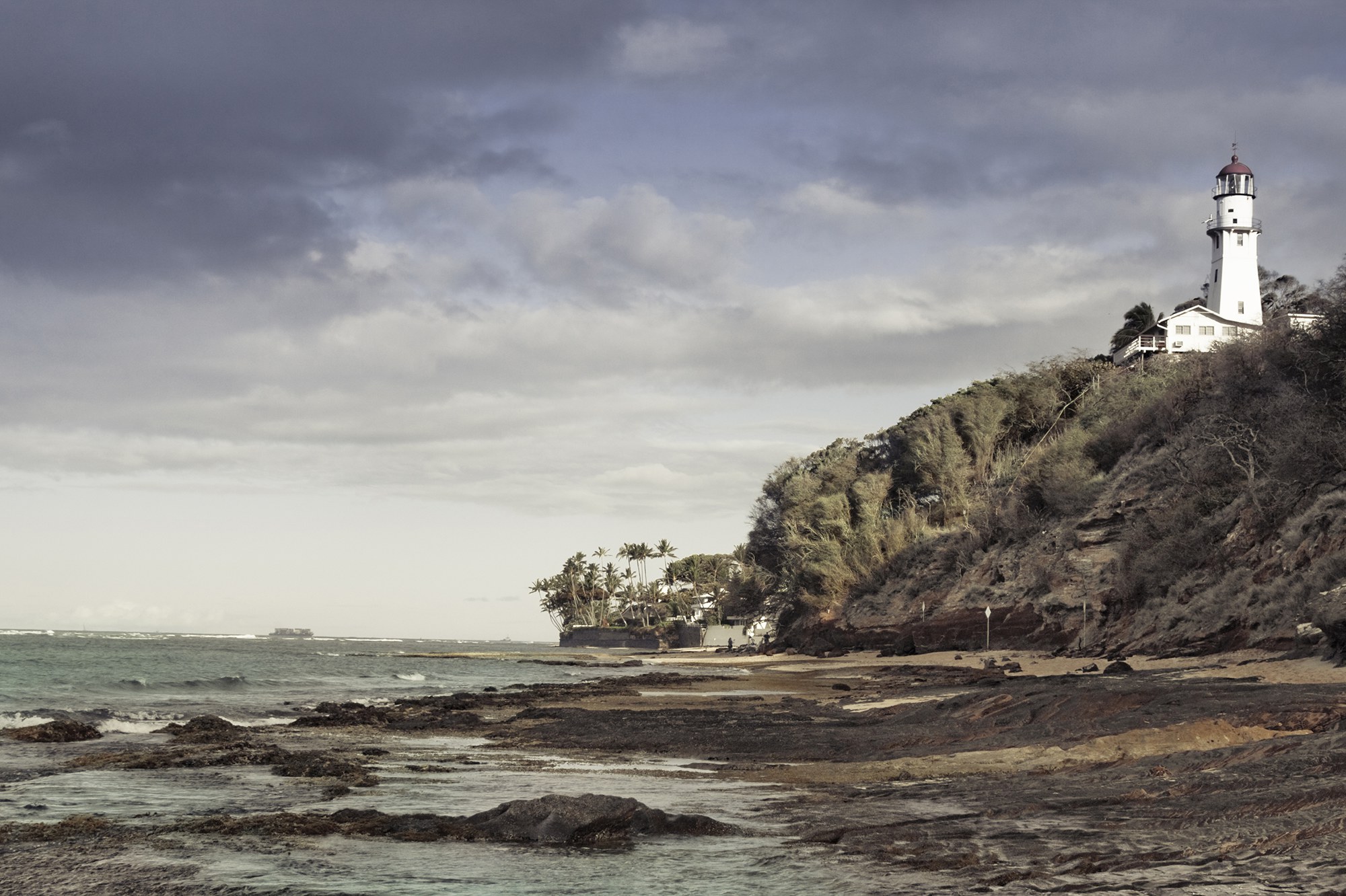 Originally built in 1899 and located at the eastern end of Waikiki Beach, the Diamond Head Lighthouse guided ships as they approached the harbor at Honolulu, usually arriving from the west coast of the United States. Prior to 1899, large bonfires were set to help guide mariners ashore, but two large ships ran aground in 1893 and 1897 which convinced local authorities of the need for a permanent solution. The structure that stands today was finished in 1917 after the first structure built in 1899 quickly deteriorated.
In the 1820s, British sailors thought they had discovered diamonds on the slopes of the volcanoes near the location of today's lighthouse. However, what they found were simple, clear calcite crystals. Nonetheless, the diamond association remains, hence the name "Diamond Head."
Though diamond dreams may have faded, Hawaii increasingly grew alluring to immigrants and visitors from Asia and the Americas, leading to increasing arrivals of people by ship during the last half of the nineteenth century, leading to the establishment of a lookout in 1878 on the on the seaward slopes of Diamond Head, with John Charles Petersen, a Swedish-born mariner as its first watchman. Gaining the nickname "Diamond Head Charlie," he worked at the lighthouse for thirty years until his death in 1907.
Despite the presence of Diamond Head Charlie, two ships ran around during the 1890s. During the night of October 2, 1893, the SS Miowera grounded on the reef just off Diamond Head and, in 1897, the grand steamship China ran aground near the dormant volcano’s crater. Both incidents made it clear that a lighthouse proved necessary, something for which Captain James King, minister of the Interior for the Republic of Hawaii had been petitioning the Hawaiian legislature for years -- it took the accidents to prove his case.
The first plan comprised of nothing more than an iron structure that would hold a light, operated by Diamond Head Charlie. But, inspections led to a belief that the tower might night withstand strong winds, so more money was appropriated to build a permanent wall around the iron, made from to coral-rock excavated from a quarry on Oahu.
The story of the watchmen and Diamond Head Charlie includes a bizarre twist. First, Captain A. Christian was appointed the first official light keeper, but the sixty-one-year-old Captain suffered a mysterious ailment that paralyzed him, blinded him and eventually killed him due to a brain hemorrhage. So, Niel C. Nielson replaced Captain Christian, only to be beaten by Diamond Head Charlie (he struck Nielson in the face with a club). Charlie was fined a mere $50 for his behavior, but he was relieved of his duties. But, five months later, Charlie was back on the job as his skills as a lookout proved superior to his replacements.
By 1904, the Lighthouse Board took control of the Diamond Head Lighthouse. Twelve years later, an inspection deemed the tower unsafe due to cracks in the structure. Thus, the commission dismantled the old tower and replaced it with the modern concrete structure that stands today, which strongly resembles the original tower except for the internal staircase that had been located externally in the 1899 design.
The U.S. Coast Guard took control of the lighthouse in 1938, a few years before the bombing of Pearl Harbor.  During World War II, the Coast Guard installed a radio station to the keeper's dwelling, which was later remodeled as a residence; it is now the home to the Commanders of the Fourteenth Coast Guard District.
Today, the lighthouse remains functional and can be seen for many miles. In 2007, the Diamond Head Lighthouse and other Pacific lighthouses were featured on a series of U.S. Postal Stamps.

Stamp: Found via the Star Bulletin (newspaper) at http://archives.starbulletin.com/2007/06/22/news/story04.html