Being the first oceanarium, Marine Dolphin Adventure first opened in 1938 and started as Marine Studios. The studio was used for underwater films, during the end of the Great Depression. Movies were highly popular during this time because the citizens of America used this as an escape from the real world. In 1947, the first dolphin to be born in captivity was born here. The dolphin’s name was Spray and he led to research being conducted on these animals. In 1953, Nellie, a famous bottlenose, was born here. She was the oldest dolphin to live under human care, growing to the age of sixty-one. Much of our information that we know today about dolphins is all indebted to her. After closing their doors in 2004 due to environmental circumstances, they reopened as Marineland’s Dolphin Conservation center in 2006. Later transforming into Marine Dolphin Adventure in 2011 which promotes to the public the need to protect the marine life. Marine Dolphin Adventure has introduced the world to new experiences with sea animals such as dolphins in a variety of ways.

Marineland's historical marker describing the history of this amenity. 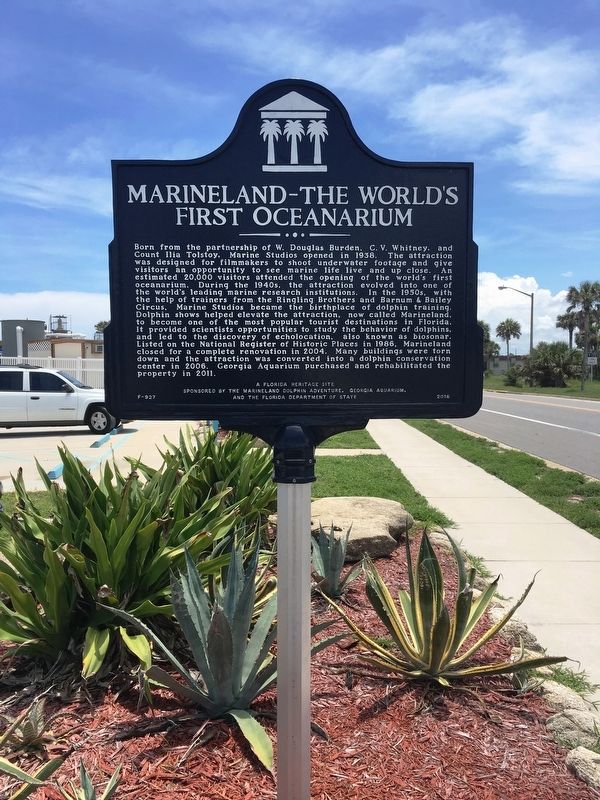 This is an old brochure for Marineland when it first opened. This explains to its viewers what they will expect when they visit Marineland.

This sign is located between St. Augustine and Flagler Beach. It explains the history of Marineland, beginning in 1938 to what we know it as today. 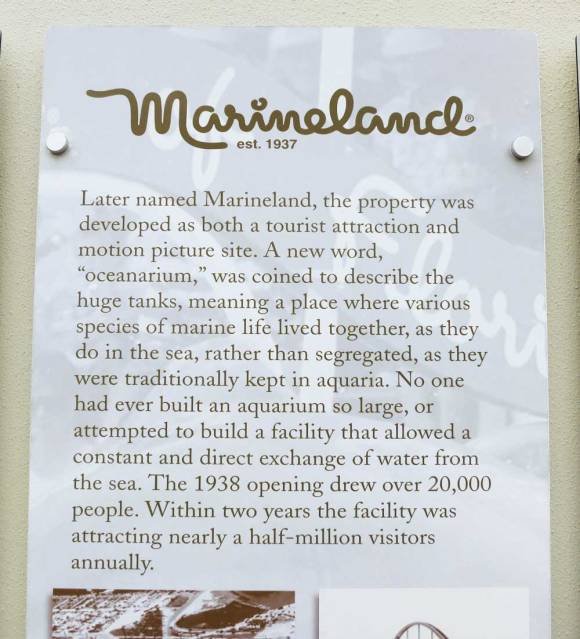 This is a newspaper article about Marine Studios when it first opened, explaining the large crowd that gathered on opening day to see the exciting studio. 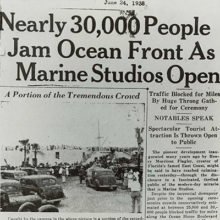 This picture describes how people first realized dolphins were highly intelligent by holding their food higher and higher making the dolphins jump to catch it. 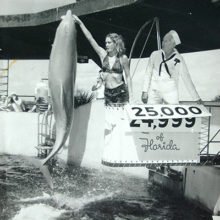 Attracting a large crowd of over 20,000 guests, Marineland first opened its doors in 1938. The main purpose of Marine Studios was for filmmakers such as, Douglas Burden, C.V. Whitney and Ilia Tolstoy who founded this facility, to be able to film movies and television shows underwater. When Marineland first started, the United States was nearing the end of the Great Depression. Many people went to the movies at this time to escape the hardship of the real world. One could go to the movie theater and buy four hours’ worth of entertainment for a nickel. This was Hollywood’s distraction for the citizen who were facing hard times. Marine Studios was a product of the film industry’s impact on society leading to many films and television shows being recorded here.

During World War II, Marine Studios unfortunately had to close its doors due to the need for the staff in the war effort. However, in 1946 it was reopened to the public after the war, evolving from a film studio that performed simple dolphin feedings into a facility that demonstrated the complex behaviors of animals. It also became one of the best research institutions in the world for marine life. In 1947, the first dolphin to be born in human care was born here. The dolphin's name was Spray and researchers were able to be the first to measure dolphin echolocation, using a sonograph. They wanted to figure out how dolphins communicated.

In the 1950s, Marine Studios changes its name to Marineland of Florida. The staff that oversaw handling the dolphins noticed something that could majorly impact their attraction. They noticed that dolphins were highly intelligent, leading to the question, could dolphins be trained? They noticed this by holding the fish higher and higher at meal time, resulting in the dolphins jumping to eat it. Adolf Fran was a trainer from the Ringling Brothers and Barnum & Bailey Circus, who was hired by Marineland to be the first ever dolphin trainer. Fran focused on a certain dolphin named Flippy and by 1951 he had learned six tricks. In 1953 Nellie, who is a famous bottlenose dolphin, was born at Marineland. She starred in several television shows filmed at Marineland and she was the longest living dolphin in human care, being sixty-one when she passed away. Marineland still honors Nellie's legacy, we would not have the understanding of dolphins we have today if it were not for her.

In 2004, Marineland of Florida had to close its doors once again, due to the destruction of hurricanes. After the makeover of the facility, it reopened in 2006 as Marineland's Dolphin Conservation Center. The new and improved facility was a 1.3-million-gallon pool focusing on the needs of the animal’s behavior, needs of the trainers, and needs of the guests concerning the view. In 2011, the facility was bought by the Georgia Aquarium and was renamed for the last time to Marine Dolphin Adventure. Today, Marine Dolphin Adventure still exhibits its past throughout the facility, but many things have changed. The focus of this facility is to promote the need to protect these animals and their environments.

Marine Dolphin Adventure has included many different purposes during its eighty-one years. Starting as Marine Studios in 1938 by Douglas Burden, C.V. Whitney and Ilia Tolstoy to be an underwater film area. This was towards the end of the Great Depression when the film industry was booming because movies were cheap, and the citizens used them as an escape from the real world. In the 1950s, the name changed to Marineland of Florida, becoming an area for dolphin training. In 2004, Marineland of Florida had to shut down and complete renovations and was able to open up again in 2006 becoming Marineland's Dolphin Conservation Center. Georgia Aquarium bought the facility in 2011 renaming it for the last time as Marine Dolphin Adventure. The amenity has served many purposes throughout the years and always being a magical experience for the guests who visit.

1. A History of Adventure – Marineland. (n.d.). Retrieved from https://marineland.net/our-history/