The James Park House is the second oldest structure in Knoxville. Construction on the home began in 1797 when Tennessee’s first governor John Sevier acquired this property. Sevier abandoned the project, and the property was later acquired by Knoxville’s second mayor, James Park. Park built his house in 1812, and his descendants kept the home in the family until selling the property in 1912. Given its location in the heart of downtown Knoxville, the structure served a variety of purposes from a Red Cross facility in World War I to the home of the Knoxville Academy of Medicine. In 2002, the property was acquired by the Gulf and Ohio Railways and restored for use as the company's headquarters. 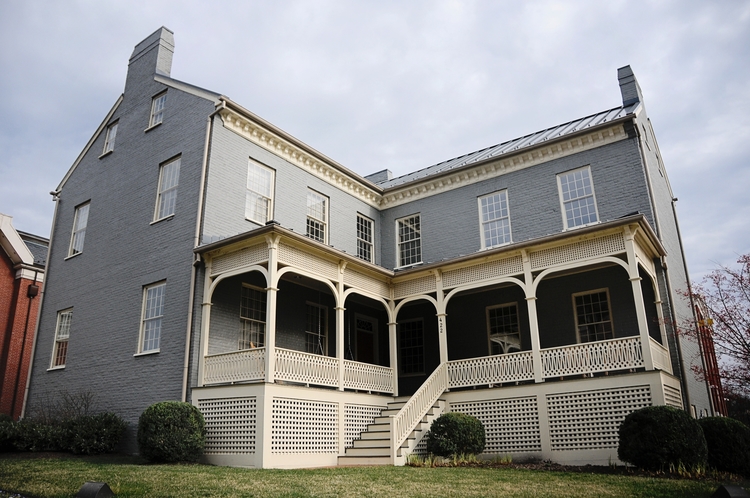 In 1797, Tennessee’s first governor, John Sevier, purchased this lot and built the foundation for a house. After running out of money for the project, he put his efforts back into his Marble Springs farm located south of Knoxville. In 1801, Sevier sold it to his son, George Washington Sevier, who later sold it to South Carolinian merchant James Dunlap in 1807. James Park, an Irish immigrant who served as Knoxville’s second and fourth mayor, finally bought the property five years later. He then built this two-story Flemish bond brick Federal home. The L-shaped addition came in the 1820s.

The Park family remained in this home until selling it in 1912. After that, the house was used for offices, a World War I Red Cross workshop, and an ear, nose, and throat clinic. In 1945, the Knoxville Academy of Medicine bought the house and used it as a museum with space for offices, classes, and meetings. The Academy sold the property to Sam Furrow and Natalie Haslam in 2002. They then sold it to Gulf and Ohio Railways, and it has since been used as Gulf & Ohio’s headquarters. Architect Lee Ingram led the renovation of the structure, which including removing a 1968 rear medical auxiliary and auditorium and restoring the house's Victorian-era porch. Work was completed around 2007.