Built in 1882 by Franklin Gruber and his family, the Gruber Wagon Works is a rare, late-19th century, fully intact, wagon manufacturing site. The 2.5 story building was originally located in Pleasant Valley along Licking Creek and was re-located to its present location, within the larger Berks County Heritage Center, in 1977. From its inception until the 1950s, the Gruber Wagon Works manufactured farm wagons from raw wood and iron to finished product. It stopped manufacturing wagons in the 1950s, but the shop continued to repair them until it closed in 1972. The original building, as well as tools and machinery, are now part of an open-air museum and is open for tours during the summer months. It was designated a National Historic Landmark in 1977.

The entire Gruber Wagon Works building was transported five miles to this spot in sections in 1977. 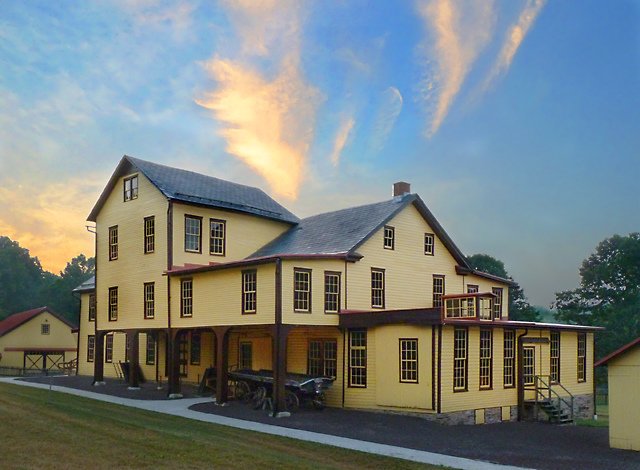 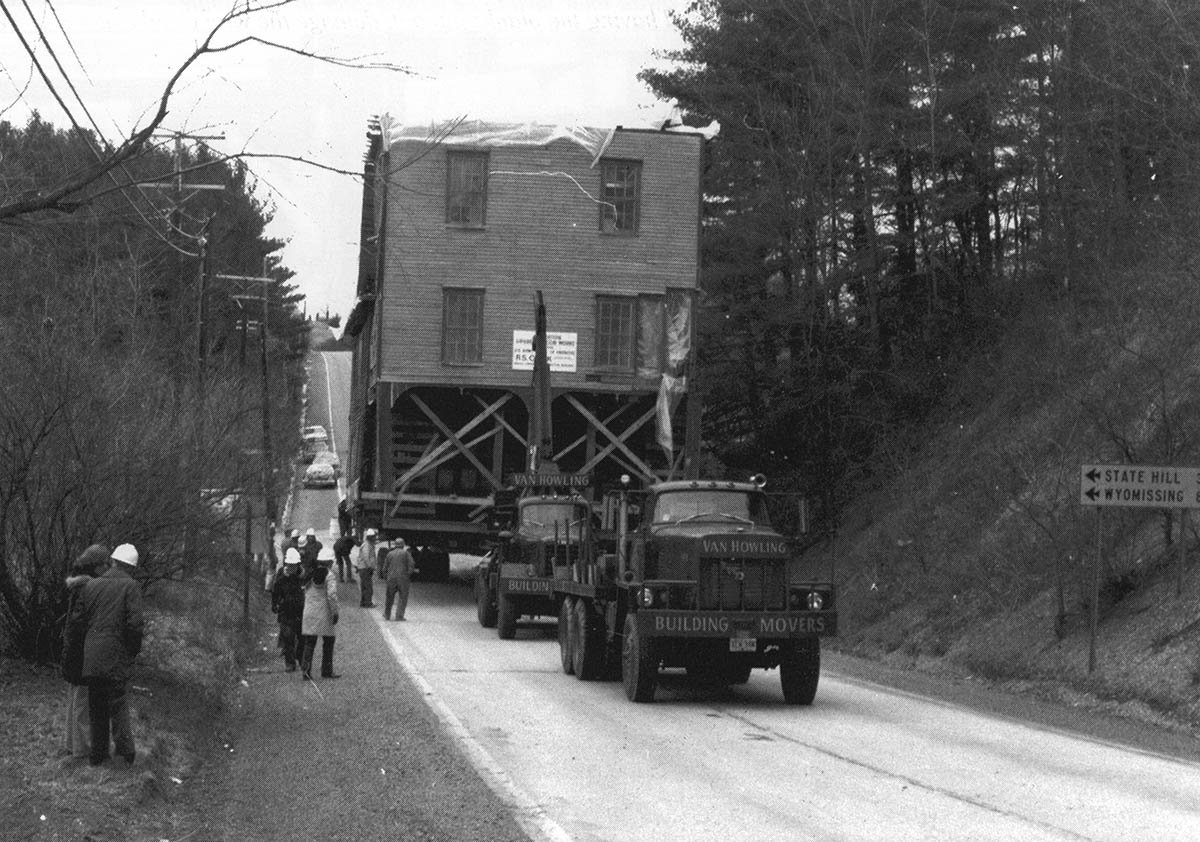 The original section of the wagon works from the late 1880s. 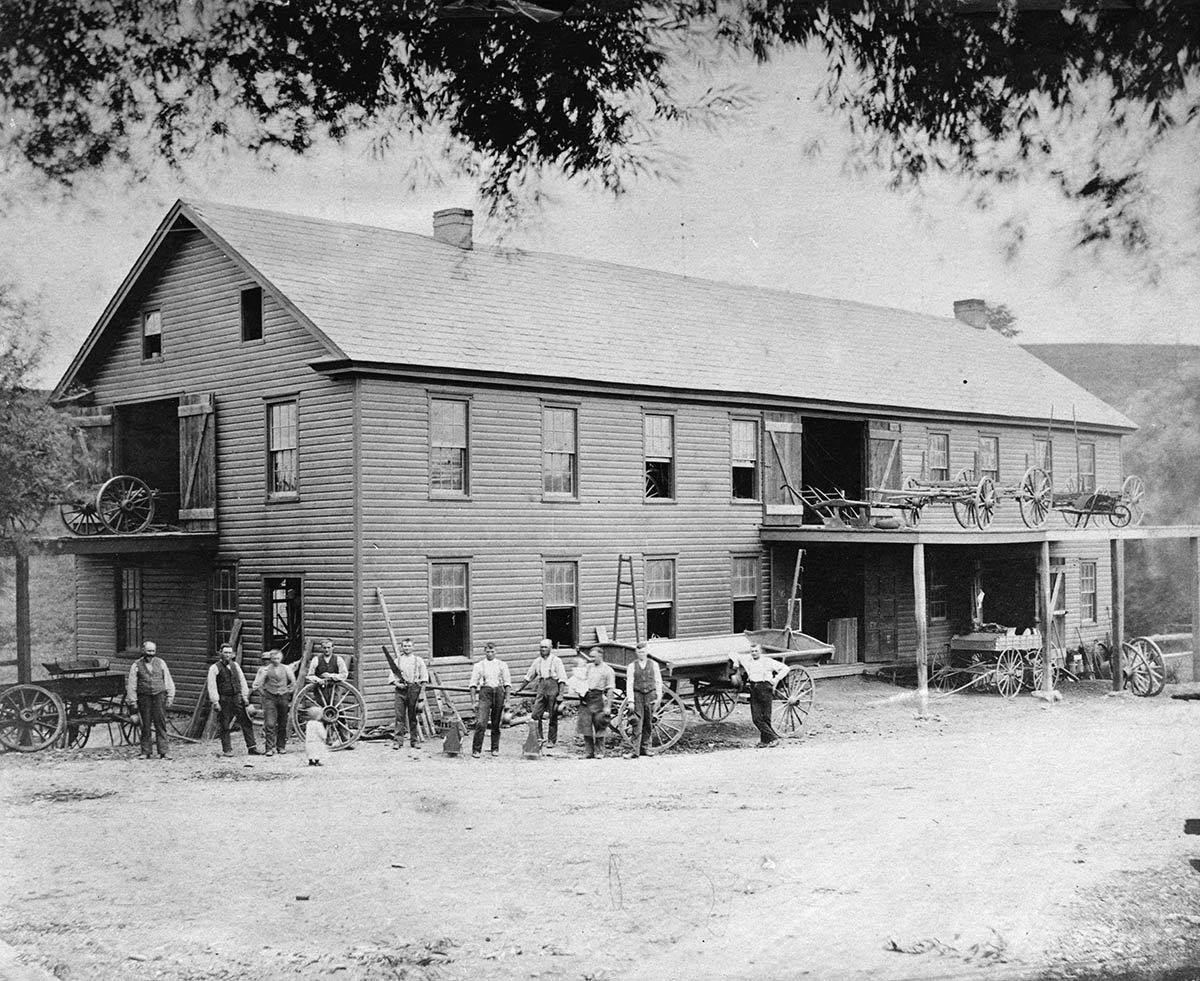 An example of a Gruber buckskin wagon. 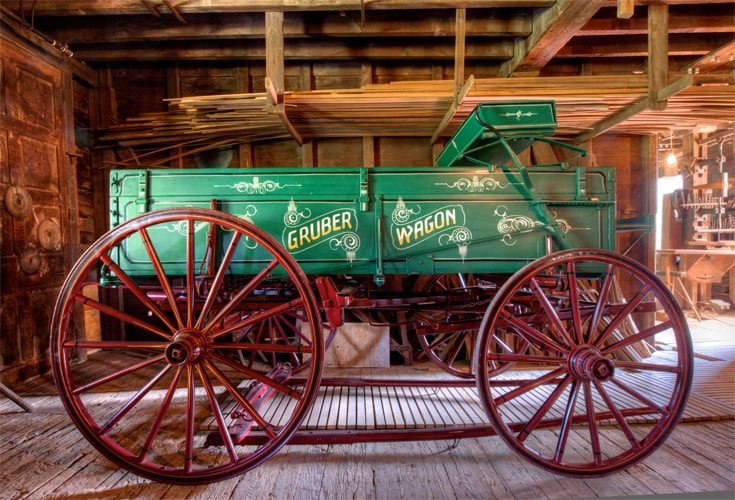 Frank Gruber had been manufacturing wooden wagons since the 1870s when he decided to open his own shop in the early 1880s. By 1882 he had constructed a wood-framed, rectangular building along Licking Creek with a gable roof and fieldstone foundation. Gruber would eventually expand the building to its present, cruciform design, by 1906. His wagon factory was divided into separate workstations to include wood, Blacksmith, bench, and paint shops. Initially, he and his sons produced the wagons by hand. However, as new technological advancements were produced, Gruber incorporated them into his shop. Eventually, his saws, lathes, and sanders would become belt-driven by steam, and later, gas-powered engines. He also added a hand-operated elevator during the 1906 expansion to move wagon parts from one floor to another.

Wooden wagons were the primary means to move goods and people prior to the arrival of the railroad in this country, especially in antebellum America. However, the railroad did not usher in the end of the wagon; the demand for wagons actually increased as railroad track mileage increased as they were used for short-hauls to and from railroad depots. What did spell doom for wagon manufacturing in this country was the arrival and development of the internal combustion engine and its use in automobiles and farm equipment.

Gruber’s peak years occurred during the 1920s when it employed 20 workers, operated six days per week, and produced 100 wagons per year. After that, production decreased, along with demand, until the Grubers stopped manufacturing wagons in the 1950s. Family members continued to labor in the shop, repairing wagons, until even they admitted defeat in 1972.

Soon after it closed its doors, the Gruber Wagon Works was threatened by a flood management project that included the damming of the Tulpelhocken Creek and the creation of the 2,200-acre Blue Marsh Lake. However, the works had been listed on the National Register of Historic Places which permitted it to be purchased by the Army Corps of Engineers and moved to what would later become the Berks County Heritage Center during the winter of 1976-77. As the building was moved in sections, so too were the Gruber’s original tools, machinery, and furnishings; when the building was re-constructed, all of those items were replaced as well. Today, the Gruber Wagon Works is one of the few remaining factories left from an essential American industry. It, along with the other buildings of the Heritage Center, is open for tours from May through October.