The Adelsverein, known also as the Mainzer Verein, the Texas-Verein, and the German Emigration Company, was a society organized for the protection of German immigrants in Texas. This organization brought the largest wave of German immigrants into Texas and the establishment of German settlements such as New Braunfels. The settlements were beneficial to both the German immigrants and local commercial outlets. Near the end of 1847, the society went bankrupt and was formally signed over to its creditors in 1853. This colonization brought a lot of German culture to the Texas area, which can still be found today in areas such as New Braunfels. 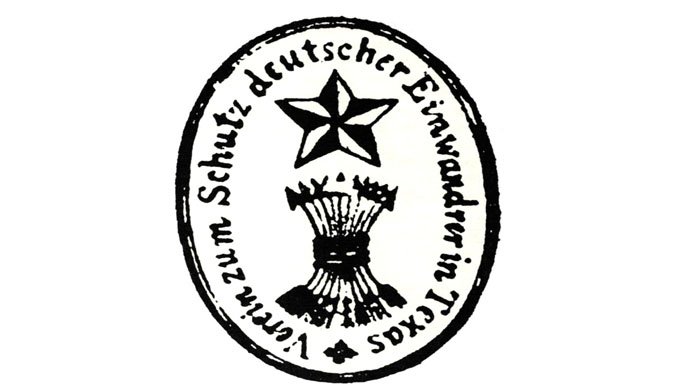 Adelsverein was organized on April 20, 1842, at Biebrich on the Rhine by twenty-one German men. The society’s creation was indicative of the endeavor to construct a new Germany in Texas through mass immigration. Texas was the ideal location for the immigration due to the great personal liberties and fertile lands found there. The society believed that the settlements were beneficial to both the German immigrants as well as local commercial outlets. Their actions brought economic relief for German industry by supplying markets abroad, which encouraged the development of “German maritime commerce.” The association was formally established as the Society for the Protection of German Immigrants in Texas on March 25, 1844 with Prince Carl Emich III of Leiningen as president.

The first German immigrants arrived in Texas in December of 1844 near Carlshafen, the port of entry instituted by Prince Solms, the first general commissioner of Adelsverein. Solms purchased two leagues of land and named them New Braunfels, after his estate in Germany, and the immigrants settled on this land. In May of 1845, John O. Meusebach replaced Solms as general commissioner. Under Meusebach’s administration, the major parts of the society’s effort were completed. Meusebach arrived at Carlshafen in May of 1845 and prepared for the arrival of 4,000 new immigrants. The Adelsverein’s second colony, Fredericksburg, was established near the Pedernales River by Meusebach in 1846. In seven months, in 1845 and 1846, 5,257 German emigrants arrived in Texas. By 1847, five more settlements had been established: Bettina, Leiningen, Schoenburg, Meerholz, and Castell. Hermann Spiess later succeeded Meusebach as general commissioner but founded no new settlements.

Under Spiess’ administration, at the end of 1847, the society was faced with bankruptcy. Neither the appointment of a new special business agent, Gustav Dresel, nor the attempt to sell the holdings of the society to another company in 1848 saved the society. There was an attempt to revive it under new nomenclature: the German Emigration Company. General commissioner Louis Bene, who succeeded Spiess in 1852, carried on the business of the Adelsverein under the new name until the company signed over “all properties and colonization rights to its creditors” in September of 1853.

The colonization in Texas brought much German culture. The German language was used widely in the areas of settlement, most commonly around New Braunfels, which became the German center of Texas. New Braunfels also later became a significant stop for the International-Great Northern railroad. Due to conflicts between the United States and Germany during World War I, it became harder for German immigrants to blend in with the Americans. German farmers changed the name of their Brandenburg community to Old Glory. Many German families changed their last names to fit in better; for example, Schmidts became Smiths. German-Texans still celebrate their heritage through many festivals and organizations, further preserving the German culture in the area.