Filipinos began migrating to the New World around the mid-1700s to escape Spanish control. In 1763, a group of Filipinos settled in Saint Malo, Louisiana, which is said to be the first Filipino settlement in Louisiana. It was along the shore of Lake Borgne in Saint Bernard Parish. For decades, a small but continuous flow of Filipinos settled in scattered villages like Saint Malo, which was unfortunately destroyed in 1915 by a hurricane. During their time in Louisiana, Filipinos developed new ideas in architecture and the shrimp industry, and Filipino communities still exist today in the state.

Taken around 1883 of fishing village of Saint Malo on the shore of Lake Borgne. 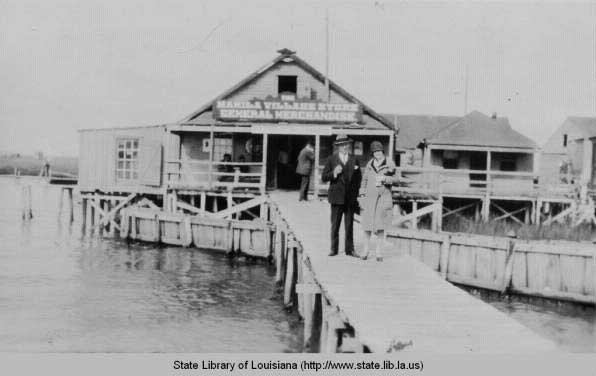 Filipinos have been living in Louisiana since the mid-1700s. At that time, they were under Spanish control.  The Philippines was involved with galleon trade with Spain, which played a major role in Filipino immigration.  Galleon trade became the foundation of occupations and a source of income.1  It was a Spanish government monopoly that shipped hundreds of thousands worth of goods.  The trade only used two galleons: one sailing from Acapulco to Manila and one sailing from Manila to Acapulco. Spanish control became stringent because the monarchy viewed Filipinos as a source of free or cheap labor, so they forced Filipinos to work as woodcutters, shipbuilders, and crewmen.2 They were known as excellent seamen, so they were pushed into working the galleon trade in various places in the New World.  Presented with this opportunity, Filipinos boarded ships to Spanish America to escape the harsh treatment of the Spaniards, and then later migrated towards the southeastern coast of Louisiana.

In 1763, Filipinos settled in Saint Malo, Louisiana, which is now known as St. Bernard Parish. Saint Malo is considered to be the first Filipino settlement in Louisiana and the United States, and it included about 100 Filipinos. For decades, a small but continuous flow of Filipinos settled in scattered villages like Saint Malo, which was unfortunately destroyed in 1915 by a hurricane.3 The people spoke Spanish, Cebuano, or Tagalog.  The colony followed the laws in coordination with the traditions and practices of the Philippines. Filipinos did not allow women to join the colony, so if a man had a family, he and his family had to live elsewhere, such as New Orleans, Proctorville, or La Chinche.4  Alcohol was not allowed in the colony, and all men were Catholic.  Disputes were settled by whomever was the oldest in the colony.5  Filipinos have made significant contributions to Louisiana through their efficient housing, improvement of the shrimp industry, and the strong economic connections.

Filipinos lived in traditional styled camps called “stilt villages.” They constructed these camps to be raised about ten feet off the ground by stilts.  After seeing this effective style of housing, many wetland communities adopted this type of housing until the whole coast was inhabited with stilt villages, which is common in that part of Louisiana.6

Filipinos in Louisiana were called “Manila Men” and, later, called “Taglas,” derived from the Filipino language Tagalog. They could almost be regarded as Filipino Cajuns, because they lived off the marshland harvesting shrimp.  The Filipinos helped develop the dried shrimp industry. Since there were no refrigerators in the 1700s, they dried the shrimp to preserve them.7  To rid the shrimp of their shells, they danced the “Dancing the shrimp,” usually accompanied by guitar. “Their hands descend to their hips in comic coquettishness. The music swells and rise and they take up their dance – a weird shuffle with scuffling feet, to the accompaniment of swaying hips. Round and round they go in unending circles,” described M.O. Frost, one of Marina Espina’s sources for her book Filipinos in Louisiana.  They danced with the sun-dried shrimp beneath their pounding feet. Because of the dancing, the sun-dried Louisiana shrimp were shucked from their shells.  Filipinos packaged the shrimp in barrels and then shipped them through the port of New Orleans, exporting them to Asia, Canada, Central America, and South America.8

Since the beginning, Filipinos established social gatherings such as cultural organizations that strengthened communities.  Many Filipinos in Louisiana today marry into families of different cultures. The Filipino community gladly welcomes these new community members with open arms.   Cultural organizations not only helped Filipinos feel a sense of family even though their relatives were often halfway across the world, but they also advocated for the good of the group.  For example in 1943, there was a successful repeal of a prohibition against Asians owning land.9 As of now, there are about 21 social, cultural, and professional organizations of Louisiana Filipinos.10 Half of these are part of national organizations that are focused on improving the lives of Filipinos living in Louisiana.  Most of these organization also promote charitable acts that benefit residents of Louisiana.  They raise funds to help people immigrating from the Philippines to Louisiana and people who are victims of disasters in both the Philippines and Louisiana. One of the earliest social clubs, Filipino-American Goodwill Society, allowed Filipinos to embrace Louisiana customs, such as Mardi Gras.11 This gave Filipinos a sense of belonging in Louisiana.12

In conclusion, Filipino immigrants in Louisiana have left their legacy in many forms such as architecture, the fishing industry, and communities and organizations.