C.W. Dickey, a celebrated Hawaiian architect, constructed this home for himself upon his return to the island from California in 1926. The design of this home proved to be a significant early prototype of Dickey's "Hawaiian style" architecture with its double-pitched hip roof with overhanging eaves. In fact, this design became a trademark of his work and is referred to as a "Dickey Roof." Dickey built several buildings in Hawaii during the 1920s and '30s, and many of the popular Hawaiian architects that worked from the 1920s through the 1950s worked for Dickey at some point in their career.

C.W. Dickey House, Honolulu, noted for its roof design that came to be known as the "Dickey Roof." 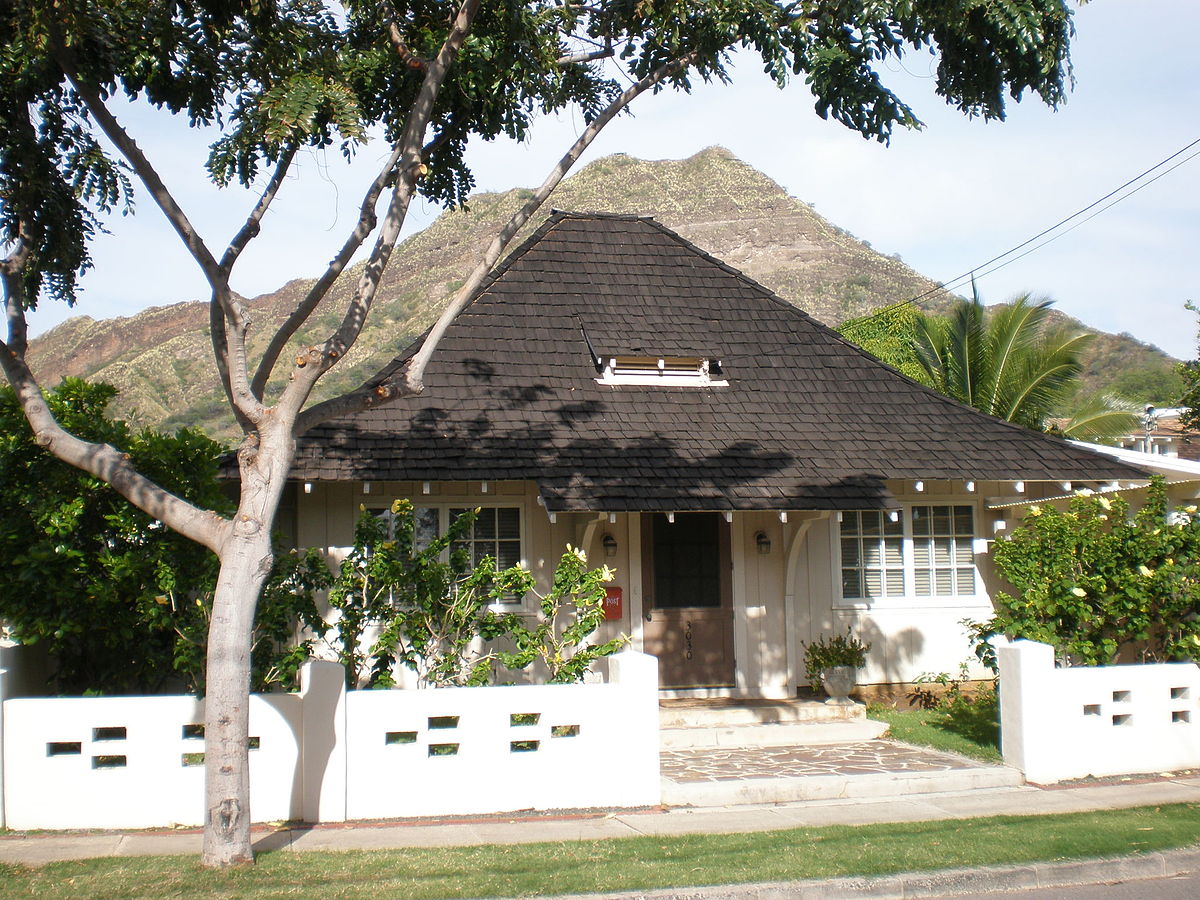 The C.W. Dickey Residence, built in 1926, was home to the well-known local architect, Charles William Dickey. The home demonstrates the development of the Hawaiian style of architecture including the double-pitched hipped roof that was well designed for the local climate. This cottage style home and unique roof design grew common during the 1920s and 1930s in Hawaii, partly due to the rising prominence of the architect who lived on the island and trained several notable Hawaiian architects.
C. W. Dickey was born in Alameda, California in 1871. At the age of two, his parents moved to Hawaii where Dickey's mother, Anne Elizabeth Alexander, had been raised. Dickey's maternal grandfather, Reverend William P. Alexander, arrived in Hawaii as an early Christian Missionary. Dickey's father, Charles Henry, operated three general stores on the island of Maui but made a name for himself because of his significant role in expanding the use of the telephone on the island. Dickey's brother worked as a lawyer and circuit court judge on the island of Kauai.
Despite the family's prominent roles in Hawaii, Dickey returned to California (Oakland) to attend high school, and from there he went east to study architecture at the Massachusetts Institute of Technology (MIT). Dickey spent the first twenty years of his career (1903 - 1924) residing in Oakland, although Dickey worked in both the San Francisco Bay area and Hawaii, traveling back and forth. Finally, in 1924, Dickey returned to live permanently in Honolulu and he remained there until his death in 1942.
The Halekulani Hotel and Girls Industrial School became Dickey's first commissioned jobs upon his return to the island. He went on to design the Alexander Baldwin Building, Toyo Theater, U.S. Immigration Station, and Kamehameha Schools. Dickey proved most instrumental in the development of a Hawaiian style of architecture found in numerous residences, from high-end housing to cottages. Through the use of elegant sloping roofs, overhanging eaves, ample windows, screened openings, and lanais (porches), the Dickey style of cottage and housing became immensely popular in the two decades preceding World War II, notably around Waikiki which grew into a noteworthy Honolulu suburb during the era.
In 1920, the Waikiki landscape underwent a massive re-development after officials declared its wetlands a health hazard and subsequently drained them. By 1928, construction of the Ala Wai Canal proved to be the final step in elevating Waikiki from a small tourist spot to an established Honolulu suburb; the former wetlands were subdivided into 5,000 square-foot properties.
Not only did Dickey design many homes and hotels in Oahu, but the vast majority of the prominent Hawaiian architects that worked on the island from the 1930s through the 1950s worked in Dickey's office at one time or another.
The house stands as a reminder of Dickey's influence in Hawaii and within the architectural world for the design of the "Dickey Roof." With its deep, shallow-pitched eaves combined with a steeper upper roof, the design is also sometimes referred to as a "witches hat." Though Dickey designed it to address the local climate and culture of Hawaii, the roof design is well-suited for any tropical location, or any environment noted for its hot weather and copious rains.

Neil, J Meredith. "The Architecture of C. W. Dickey in Hawaii."  Accessed February 1, 2019. https://core.ac.uk/download/pdf/5014479.pdf. The document's original publication and location is unknown at the time of citing this. However, the document is located at numerous academic institutions (libraries) and J. Meredith Neil served as an Associate Professor of American Studies at the University of Hawaii during his career.