Ascension Of Our Lord Catholic Church 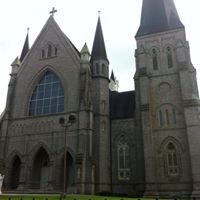 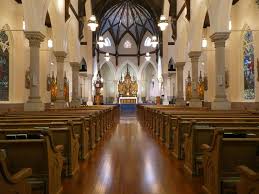 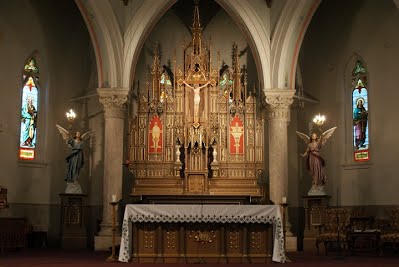 Image of what the 1st church was thought to look like 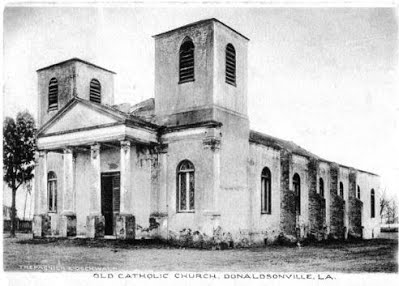 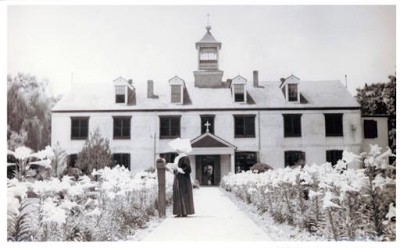 The Acadians settled what would come to be known as Donaldsonville in 1758. Spanish missionaries that were also settled there began construction on a small mission chapel for the settlement in September 10, 1770. The missionary priests served their communities by traveling up and down the River by boat. Thirty-four years before the founding of the city of Donaldsonville, Father Angelus Revillogodos dedicated the Church parish to the Ascension of Our Lord on August 15, 1772. The official name of the church was La Iglesia de La Ascension de Nostro Senor Jesu Cristo da Lafourche de los Chemtimaches. The reference to the Chemtimaches Indians is due to the fact that they were the first people who the French Priests encountered when they came to evangelize the area in 1704. The original wooden chapel was enlarged in 1783, but still was unable to facilitate the needs of the community. It was completely dismantled and replaced by the first official church building in 1819. The new building was constructed by brick. The first ordination to the priesthood, Jean-Baptiste, in La was celebrated at Ascension of Our Lord on October 24, 1823.

Construction of the second larger church was completed in 1843 at a cost of $19,000. For the first one hundred years of Ascension of Our Lord Church, 1772-1872, there was a total of twenty-two missionary priests that pastored the Parish. Father Francis Xavier Ceuppens was the twenty-third pastor. He began the planning of the third church building, which is the building still on site today. Construction began in 1875 and the cornerstone was laid in June 1876, but soon after construction slowed due to problems obtaining expensive imported materials. Eight years after the construction of the third building began, building was brought to a halt. Father Ceuppens was caught in the middle of a legal dispute between the Church’s Board of Wardens and the Archbishop of New Orleans over control of the Church’s money and property. During this time Ascension of Our Lord was placed under interdict and celebration of all sacraments stopped by the order of the Archbishop. Father Ceuppens followed the order of the Archbishop ending all sacraments and Ceuppans was forcibly removed from the rectory by threat of bodily harm by the Board of Wardens. The dispute was eventually settled in favor of the Board of Wardens because a court Magistrate was a relation to one of the Board members. Church money and property was transferred to the new Archbishop Father Jean Honore Dubernard. His appointment ended the interdict.

With the interdict removed construction resumed on the church building. In 1896 after 21 years and an estimated 80,000, he new Ascension of Our Lord Catholic Church opened in March 31. The building was dedicated on April 14. When the final building was opened and dedicated, the construction was not completed. It was not finished until 1900. Father Dubernard was able to see the opening before his passing. He passed away on August 1, 1902 after serving Ascension Parish for 17 years. Father Dubernard is interred in a crypt under Ascension Church and the crypt is visible from the Chapel of Perpetual Adoration of the Blessed Sacrament, which is located directly beneath the main sanctuary.

Since the early 1900s several reconstruction projects have been completed at Ascension of Our Lord. Suffering years of strong winds, the bell tower was declared unsafe and was dismantled in 1936. In 1907 the rectory was demolished and construction began on s new administration building adjoining thew church at the side. A new clergy residence was also constructed in 1986. In 1989 massive preservation efforts were undertaken to build a new bell-ring system. In 1996 the steeple was restored after being absent for sixty years. In 2000, the minor spires and the cupola were restored as well.

About Us, Ascension of Our Lord Catholic Church. Accessed October 19th 2020. https://www.ascensioncatholic.com/about_us.html.