The history of Ponce Inlet, Florida. The town includes a marine science center, the coast guard station, the famous lighthouse, and of course, the inlet. The inlet is a natural opening that connects the Mosquito Lagoon and the Halifax River to the Atlantic Ocean. The first lighthouse was built in 1835 on the south side of the inlet and due to weather, was decommissioned. Later in 1887, another lighthouse was built on the north end, this is the famous lighthouse we know now. 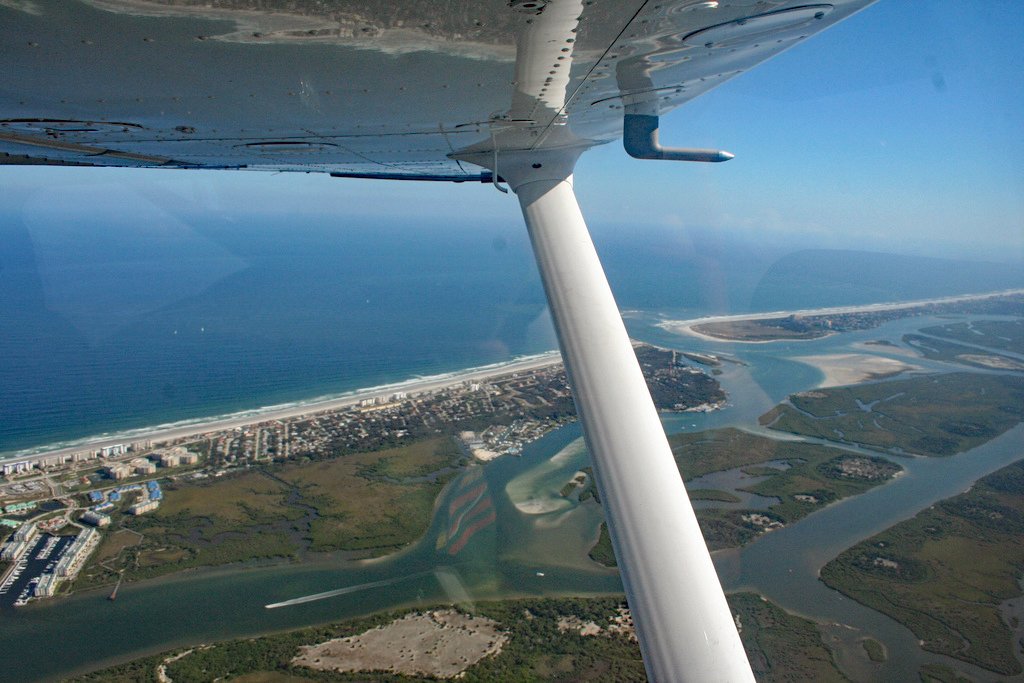 The City of Ponce Inlet, Florida has a plethora of historical spots before it was even named Ponce Inlet. The city is based around the famous Ponce de Leon Inlet Light Station and the commonly used Ponce Inlet. The Inlet connects the Halifax River and the Mosquito Lagoon. Next to the lighthouse is where records were being set, land speed records right on the beach. No less popular is their Marine Science Center full of all the marine wildlife indigenous to the area.

The popular Ponce de Leon Inlet Light Station located at 4931 South Peninsula Drive, Ponce Inlet, FL, began as the Mosquito Inlet Light Station in 1883. Construction lasted four years and costed three lives. The Kerosene lamp was first lit on November 1, 1887 by keeper William Rowlinski. Fast forward to 1897, author Stephen Crane shipwrecked off the coast. Later in the 1920s, modern additions were made such as bathrooms and indoor plumbing. During this time, tourism was booming in the state. Florida was one of the biggest social phenomena’s in American history in the 1920s.  By 1926 the name was officially changed to Ponce De Leon Inlet Light Station for real estate and tourism purposes. 1933 rolled around and the light house was electrified. Through out all of families that cared for the light station, it has only improved. “After the war, families moved back, but in late 1953, the lighthouse was completely automated, and the keepers and their families left for the last time” (Ponceinlet.org). By the year 2004, the station was officially deemed an operational private aid to navigation.

1922, just a few years after the first automobile rolled off the assembly line, on the shores of South Daytona Beach began an era. The course began on pavement. Highway A1A (at 4511 South Atlantic Avenue, Ponce Inlet 29.108890°N 80.943669°W) to be exact. A restaurant called "Racing's North Turn" now stands at that exact location. The race ran south exactly two miles parallel to the water. The track looped back on the sand where drivers would cross the finish line. The racing continued heavily until 1959 when the Daytona International Speedway was built. Throughout the 37 years of beach racing, many land speed records were broken here. February 15th, 1935, Sir Malcolm Campbell drove his famous Blue Bird race car to the new land speed record of 276 miles per hour. “Racing at the Daytona Beach Road Course was extremely dangerous, but that didn't stop hundreds of racers from participating in events or legends from being made” (rodauthority.com). The Course is still used once a year in February to commemorate the previous racers that defined the sport

South of Daytona Beach, Ponce Preserve protects a forty-acre cross-section of barrier island habitats between the Atlantic Ocean and the Halifax River at Ponce Inlet. What most people don’t know, is the city of Ponce Inlet includes part of Daytona Beach. This section of beach is where auto racing was born. The other half of the trail is entirely wheelchair accessible due to the artificial boardwalk. The boardwalk winds through the mangrove forests out to the Halifax River, providing a nice sense of balance for hikers, explorers and tourists of all abilities.

The marine science center located at 100 Light House Drive, Ponce Inlet FL, teaches the community about the marine environment and the ways to conserve it. According to their website, the main goal of the Marine Science center is “Rescue, Rehabilitation, and release of sick and injured turtles and birds” (MarineScienceCenter.com). Tourists and guests can get a closer look at the animals through the hospital viewing window. Guests can also take a journey through Florida’s marine ecosystems tour, discovering the animals that are indigenous to this area. The center offers what they call a “touch tank”, a hands-on experience that allows the individual to actually touch the stingrays and invertebrates. Visitors are welcome to explore the nature trail and climb the observation tower for the scenic view of the estuary. For the birds that cannot live in the wild anymore due to specific conditions, the center offers the Mary Kelly Bird Sanctuary. For the kids, and the adults that still want to be kids, the Marine Science Center offers daily animal education presentations where the guest can experience up close views of raptors and reptiles

The City of Ponce Inlet, Florida has more than meets the eye. Between climbing to the highest point in the city in the Light Station, to walking along the boardwalk in the dunes, the city has something for everyone in the family. For the adventure seekers, the sand that once supported record breakers can still be felt under the toes of any visitor. And if you’re more into the wildlife side, the Marine Science Center has enough birds and turtles to make Darla stop looking for Nemo. If you don’t want to see the city from the ground, private companies offer boat and plane tours to get a full view, so you don’t miss anything.

FISHER, LINDSEY. A Look Back at the Historic Races on the Sands of Daytona Beach. February 27, 2012. Accessed March 12, 2019. https://www.rodauthority.com/news/a-look-back-at-the-historic-races-on-the-sands-of-daytona-beach/.