The Flagler Over Sea Rail Road

When the Panama cannal was being built Henry Flagler believed that Key West would be a great center of commerce so he began construction of his rail road. The rail road still remains up in sections along the highway all the way down but has degraded over time. The Location of Pigeon Key was used as a workers camp where they lived and got ready for the coming day. The rail road stretched for over 100 miles over water which was a great feat of technology in the early 1900s when it was built. After 1912 it brought cargo to help maintain the islands and passengers to enjoy the sights. Although the railroad ended in its run in 1935 when a hurricane destroyed a section of it, a highway replaced the need for the rail road.

Train going over the bridge south. Image can be seen: https://www.flaglermuseum.us/history/over-sea-railroad 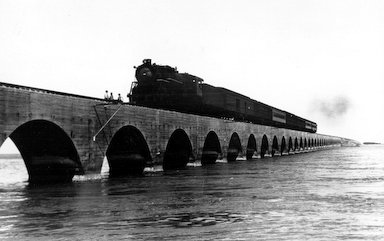 The remnants of the old Flagler overseas railroad can still be seen today. The rail road began construction in 1905 and construction finished in 1912. The railroad project was started due to Henry Flagler looking down at the keys and believing that Key West would become a important trade route with Cuba and Latin America, and also being an important rest stop for ships going through the panama canal (fla-keys.com)

Henry Flagler has been known as one of the great influencers of Florida not only because of this railroad but also because of his development of colleges and schools in north Florida. He became very well known in his other rail road projects throughout Florida which started to give Florida an infostructure to begin growth across the state. He gained most of his wealth through his partnership with Rockefeller in Standard oil (Grosscup).

The construction of the railroad was seemingly doomed from the start due to the engineering advancements needed for the railroad to be built since it was going to be over the ocean for most of the way down. Once it was completed some people started calling it the “eighth wonder of the world” (Grosscup). The reason most people thought that this task would be too much was due to the fact that the rail road ended up stretching over one hundred miles over the water (Fla-keys.com) and caused a lot of concern among engineers who weren’t ready to undertake this impressive task and became one of “the most ambitious engineering feat ever undertaken by a private citizen.” (flagermuseum.us).

During the seven-year construction five hurricanes threatened to stop the project, three of which caused damage and loss of life (Cohen). Hurricanes have always affecting the railroad during the construction and ended up being the thing that ended the railroad.

The overseas highway ended up starting construction in 1927 and being opened to the public in 1938 (Grosscup). The highway was not a direct replacement for the railroad but also aided in travel and tourism allowing people to also drive down not always making people travel by train. The highway didn’t seem like it was going to get rid of the railroad until 1935 when a hurricane took out a decent chunk out of the tracks and the company could not pay to replace that section, so they just closed it entirely and sold the remnants of the bridge to the state of Florida for about $640,000. Although in 1938 the highway did not complete stretch all the way to Key West until 1982 when the Seven Mile Bridge was built, people would use fairies to get from Knights Key (part of Marathon city) to Little Duck Key.

Pigeon Key was the middle point of the project and a place where many workers decided to stay to relax for a bit as wells as a rest stop between Miami and Key West (atlasobscura). The island has been abandoned twice, once in 1935 during the hurricane that destroyed part of the bridge, and in 1982 when the Seven Mile Bridge was opened (atlasobsura). The inhabitants of Pigeon Key when fleeing the hurricane in 1935 ended up being derailed at Islamorada and killed 432 people (atlasobscura). Ernest Hemingway even went as far as publishing a letter to say it was “gross negligence nothing less than murder” (atlasobscura).

The whole project undertaken and ultimately completed spanning one hundred and fifty-six miles was a huge accomplishment for technology at the time. If it weren’t ultimately for this railroad Key West and the cities in the keys may not have grown and flourished like they have through the years. Although Key West hasn’t become a major city like Flagler believed, the Navy took the opportunity and created a Naval base down in Key West due to its location and its ability to be close to the Panama canal and the south American countries. The island of Key West itself ended up continuing a lot of trade with Cuba until the United States banned trade with the country. The created and continuation of Key West to this day is mostly spurred by tourism and the culture that has been produced by the city that’s had to fight its whole existence. Through the years Key West has turned from a trading town and salvagers to a City thriving and surviving off of their tourism due to their beautiful sights and interesting history.