This house was built in 1856 and served as the executive mansion for seventeen governors of the state of Wisconsin from 1885 to 1950. It was added to the National Register of Historic Places in 1972. Constructed of locally-quarried sandstone, this house was originally built for Catherine and Julius T. White, Secretary of the Wisconsin Insurance Company. The Whites sold the house in 1857 to one of Madison's first settlers, George P. Delaplaine and his wife, Emily. George Delaplaine was secretary to Governors Farwell and Dewey. He was also the co-owner of one of the largest real estate development firms in the city. In 1867 the house rose to greater social prominence when it was purchased by State Senator J. G. Thorpe, a millionaire lumber baron, and his wife, Amelia. In 1870, the Thorpe's young daughter, Sarah, married Ole Bull, the world-famous 60-year-old Norwegian violinist in one of the most lavish weddings the town had ever seen. Governor Jeremiah Rusk acquired the house in 1883 and sold it to the State of Wisconsin two years later. 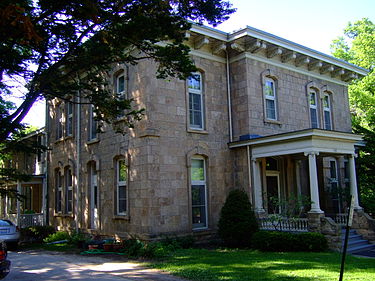