Opening two years after the 1970 death of Wharton Esherick, this museum preserves Esherick's studio and interprets the work and life of this influential American artist. Esherick was a painter, illustrator, and poet. However, he is best known for his wood sculptures, especially those in the form of furniture and furnishings. Considered by many the “Dean of American Craftsmen,” Esherick turned the utilitarian, like tables and chairs, into works of art. The 12-acre campus features a small museum and tours of his self-built studio and home that contains numerous pieces of his art and tools. The studio and related buildings were listed on the National Register of Historic Places in 1973 and designated a National Historic Landmark in 1993.

What began as Esherick's studio gradually became his home as well. 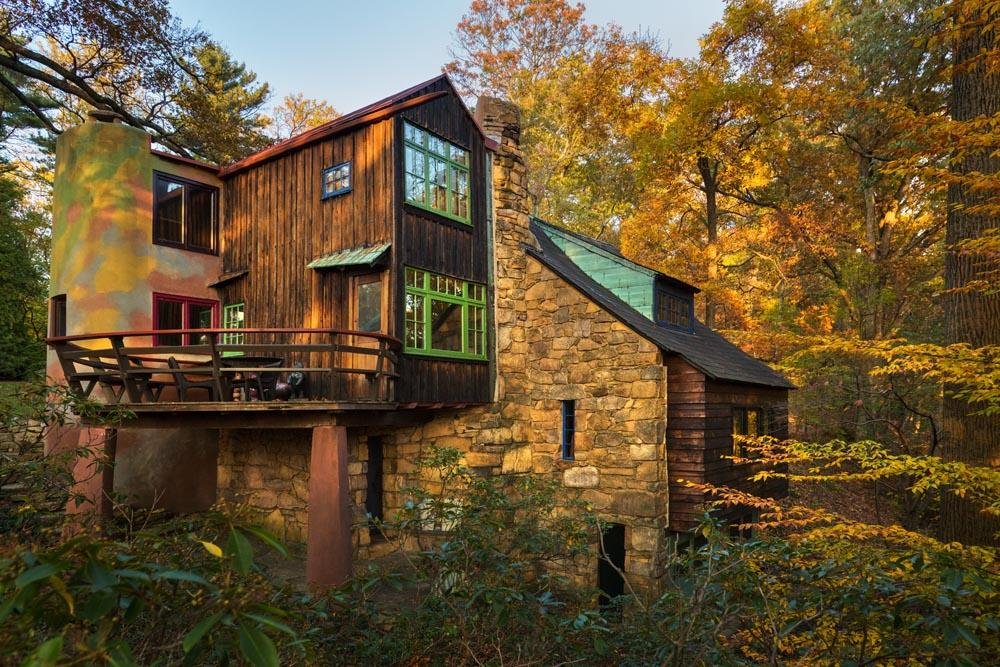 Esherick's garage now serves as a visitor's center and museum dedicated to the artist and his works.

The dining table and other furnishings designed and created by Esherick. 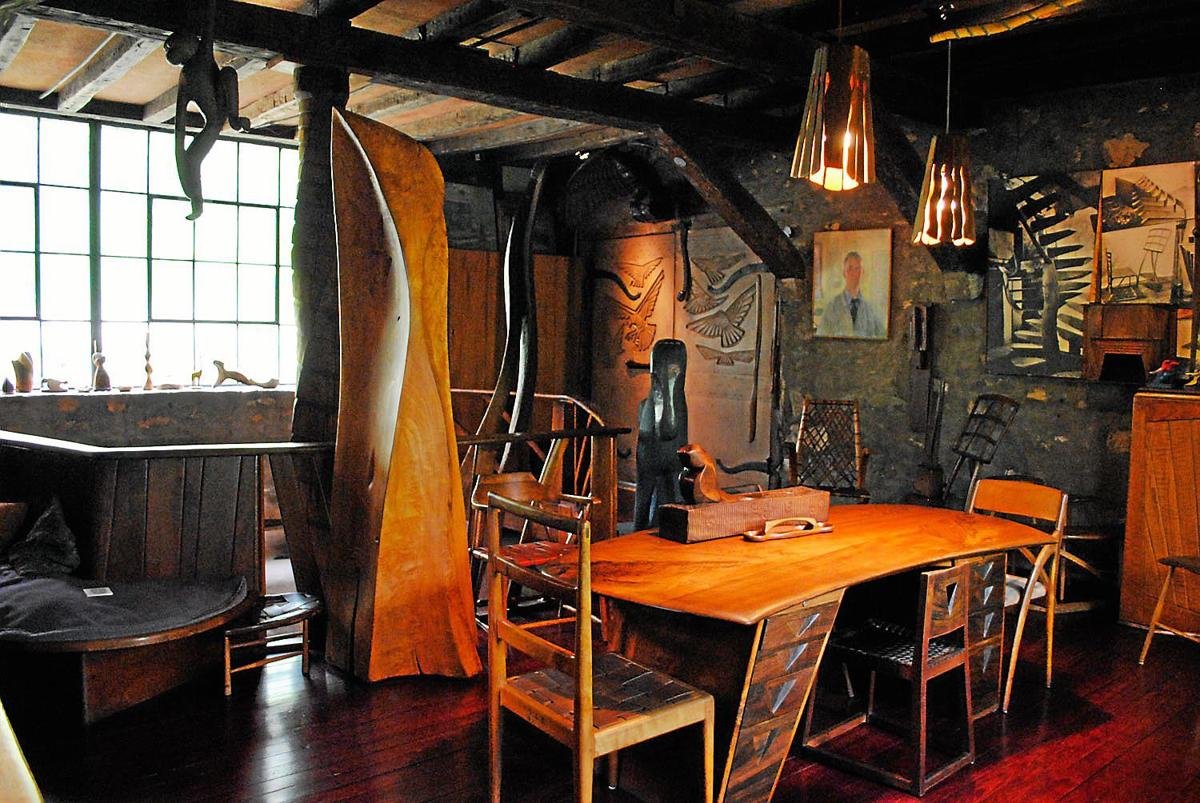 Esherick managed to shoehorn a kitchen into his home's silo-like tower. 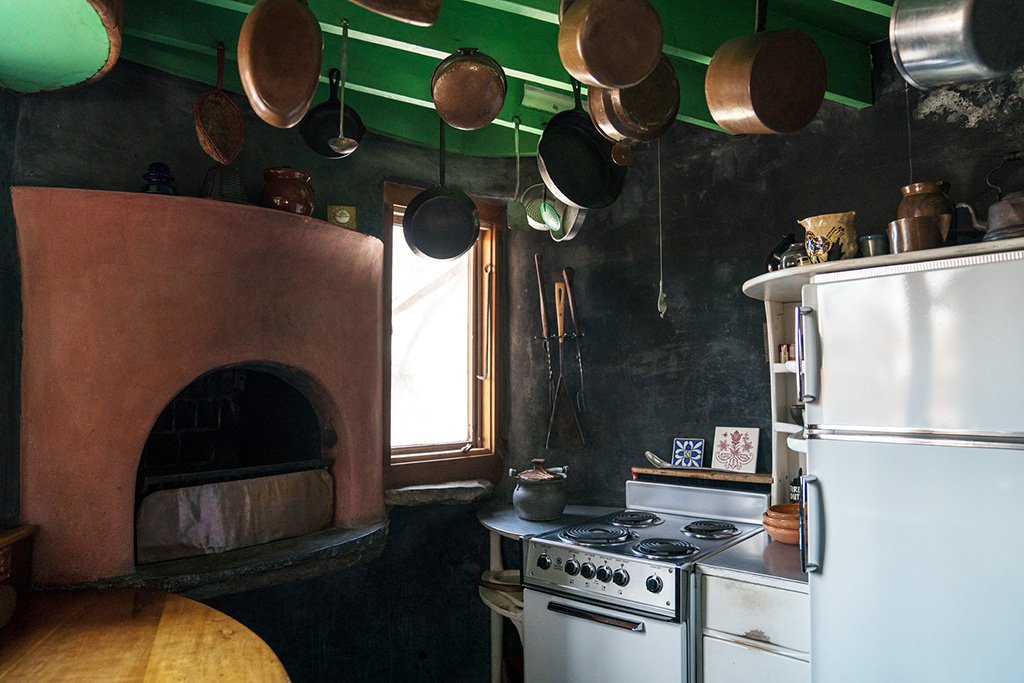 The "Dean of American Craftsmen" at work in his studio. 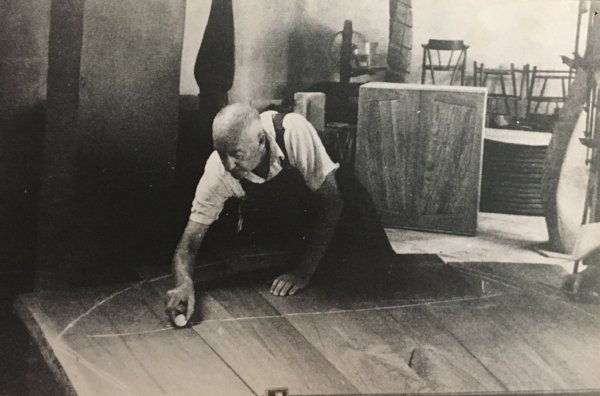 Wharton Esherick was born in 1887 in Philadelphia and spent his childhood there.  He later studied at the Pennsylvania Museum School of Industrial Art and the Pennsylvania Academy of Fine Arts where he studied painting.  Disenchanted with conventional living in Philadelphia, Esherick headed for the country in 1913.  He settled in a 19th-century farmhouse just outside Paoli and began to pursue his painting career.

However, he eventually discovered a love for working with wood that stemmed from carving frames for his paintings. Following his motto, “If it isn’t fun, it isn’t worth doing,” he soon moved on to woodblock carvings and carvings on furniture.  Finally, by the early 1920s, he was sculpting his own wood furniture in new and unique ways.  Influenced by Austrian philosopher and architect, Rudolf Steiner, Esherick’s work moved from Arts and Crafts to Expressionism, settling finally on his own free-form curvilinear style he is best known for.  He excelled at transforming, heretofore, functional pieces of furniture into works of art and became the leader of the studio furniture movement.

By 1926, Esherick’s works were on display at the Whitney Museum of American Art in New York and eventually ended up in the permanent collections in over 20 major museums and galleries, to include the Metropolitan Museum of Art, the Philadelphia Museum of Art and the Renwick Gallery of the Smithsonian.  He also had a room of his furniture and furnishings displayed at the New York World’s Fair in 1940.  Esherick’s works are also held by many private individuals as he accepted numerous commissions from various fans of his art.

In 1926, Esherick began to design and build his own studio and this would occupy his time, on and off, for the next 40 years.  To his studio, Esherick would gradually add a bedroom, bathroom, kitchen, and dining room, making it his new permanent residence as well as a piece of art in its own right.  It is this studio that is the centerpiece of the museum today.  He also designed and built an Expressionist garage, beginning in 1928, which now houses a visitor’s center and a small museum.  In 2014, the museum re-acquired the farmhouse, known as Sunekrest, Esherick used as his first home when he arrived at Valley Forge Mountain.  The Esherick Museum, in addition to guided tours, also offers an artist residency program and imprint and woodworking competitions.