Located just outside the Holland Land Office Museum is this historical marker, which commemorates the life of Batavia native Captain Charles F. Rand (1839-1908), who is officially recognized as being the first person to volunteer for the Civil War after President Abraham Lincoln called for volunteers on April 15, 1861, which was a few days after Confederates attacked Fort Sumter. Rand fought in the First Battle of Bull of Run, which took place in Blackburn's Ford, Virginia, and was awarded the Congressional Medal of Honor in 1839 for his actions. He one of the first soldiers in American military history to receive the medal. He is buried in Arlington National Cemetery and his medal is on display in the museum.

The marker is located just outside of the Holland Land Office Museum. Photo Credit: The Historical Marker Database 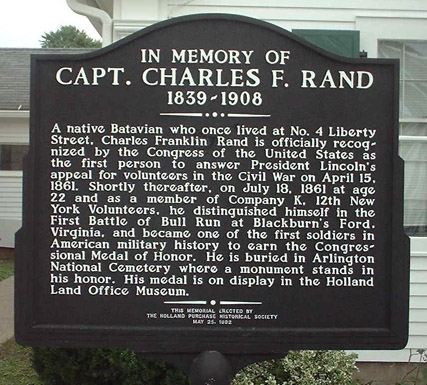 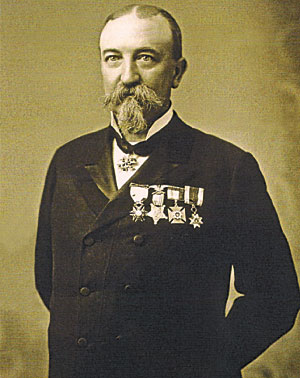 Lincoln's appeal reached Batavia via telegraph on the same day he called for volunteers. According to the magazine Buffalo Spree, a local major read the telegram out loud a to a group of people, which included Rand, and asked them who would volunteer. Rand responded by declaring "I will," thereby cementing his name to history. At the Battle of Bull Run, some of the men in his regiment retreated but he refused to do so. He fought with another company and was shot through the shoulder. He was captured and sent to a Confederate prison for several weeks.

After the war, Lincoln granted Rand a position in Washington D.C. He then moved to Texas where he served as sub-assistant commissioner of the Bureau of Refugees, Freedmen, and Abandoned Lands. As it was a dangerous job, he was given a Confederate colonel's uniform to wear for protection.

He earned a medical degree from Georgetown University in the mid to late 1870s and set up a practice in Batavia in 1879. He also opened up a wheel factory. He died in 1908 is interred in Section One of Arlington National Cemetery.