Erected in 1843, the historic Genesee County Courthouse stands prominently at the intersection of Main and Ellicott Streets. It was designed in the Greek Revival style and is still used for official government purposes, serving as the meeting space for the Genesee County Legislature, and housing the offices of the County Manager, the Assistant County Manager, and the County Attorney. The three-story building features a limestone facade and a cupola with a brass bell. It was added to the National Register of Historic places in 1973.

Genesee County Courthouse was built in 1843 and is still by the county government. 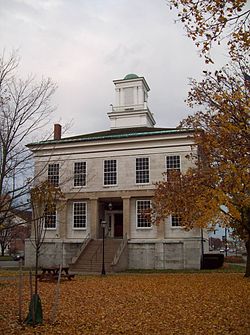 The first courthouse was built in 1802 under the supervision of land surveyor and chief agent of the Holland Land Company (the Holland Land Office Museum is located just down the road and is a Clio entry), Joseph Ellicott. Ellicott founded Batavia and oversaw the development of Western New York, most of which was owned by the company.

As the population in Batavia and the county grew, the need for a bigger courthouse became apparent. The state legislature appropriated funds for the building in 1840 and construction began in 1841 and ended in 1843. The building has undergone changes over time, including major renovations in 1931, but it still retains much of its historical integrity.