Designed in the Art Deco Style, Madonna della Strada Chapel opened in 1938 on the Campus of Loyola University in Chicago as the University's main chapel. The Chapel was designated a city landmark in 2004 by the Chicago commission for its unique, and striking architecture, and ornamentation. Fundraising for the chapel began in 1924 and stalled in the early years of the Great Depression, but Father James Mertz and university leaders never gave up and construction began fourteen years later. The chapel held services despite the interior remaining unfinished for several years. That interior was renovated in 1985, and again from 2006 to 2007. The chapel added four large bells in 2014 that chime throughout the year and mark various occasions. 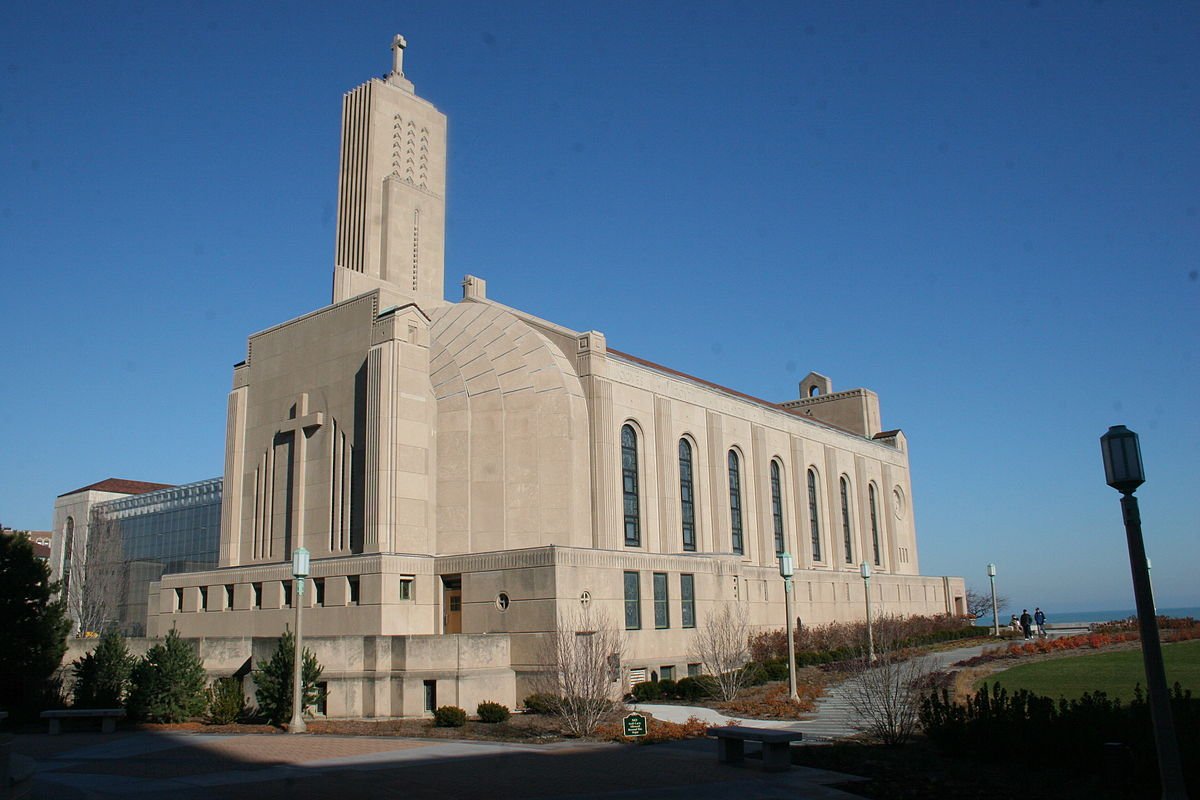 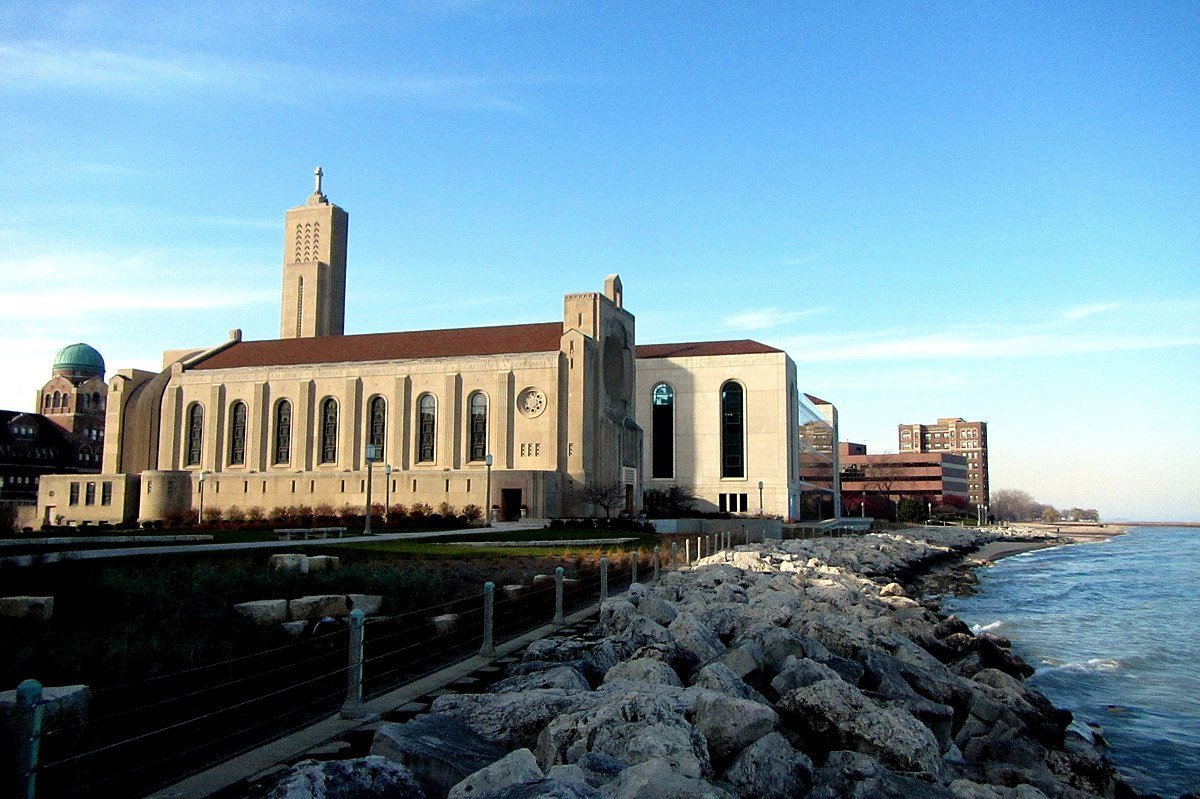 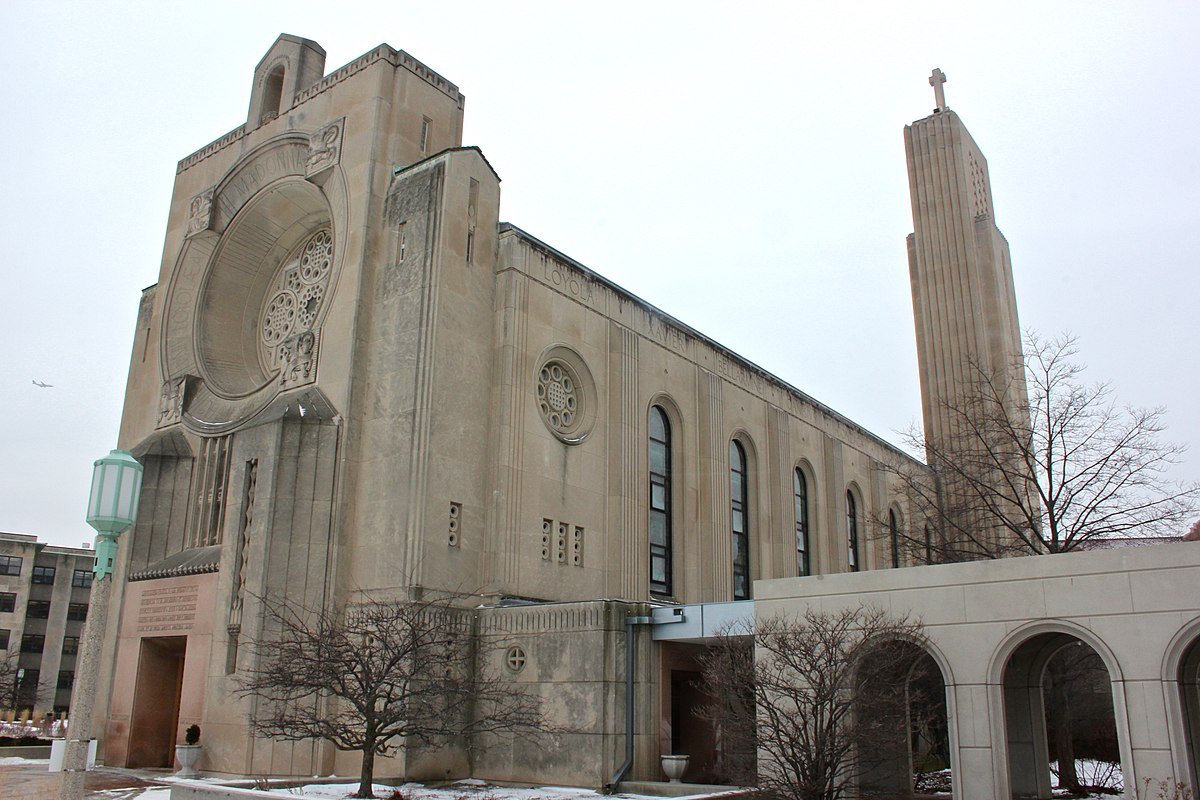 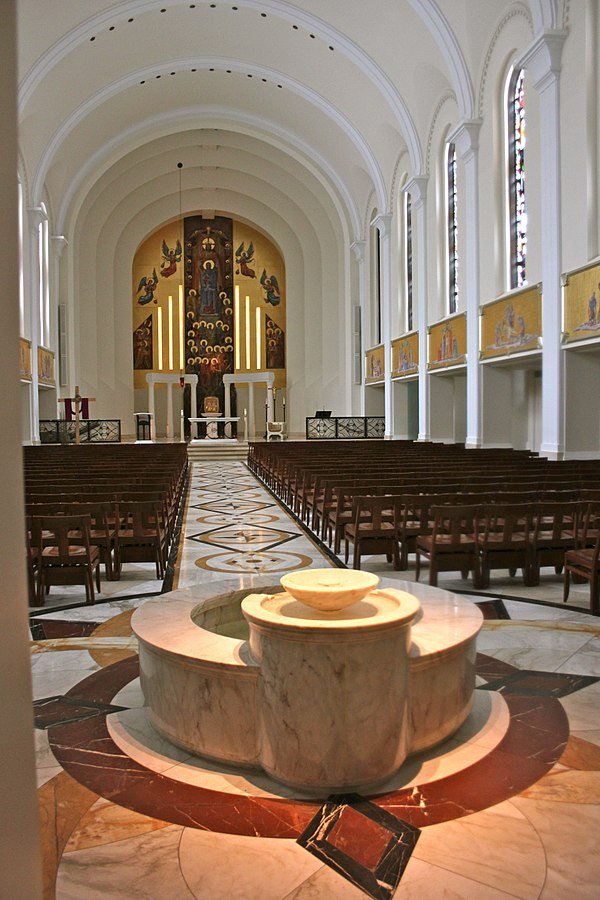 Built during the Great Depression (in 1938), the Madonna della Strada Chapel can be found on the Loyola University Campus along the Lake Michigan shoreline. The striking architectural design is an example of "Modern Classical" architecture comprised of features tied to Art Deco and Expressionism. One will notice the chapel's brazen classical-forms, abstracted geometric ornamentation, use of glass block, low-relief sculptures, decorative frieze, and a soaring bell tower.
The tradition of building lavish, elaborate Catholic churches goes back several centuries. As such, when Loyola felt the need to construct its own church, it required a substantial amount of money. Fundraising efforts for Madonna della Strada Chapel, spearheaded by the University, began slowly in 1924 but stalled during the Great Depression. However, the university remained committed to obtaining funds. Finally, construction on the chapel started in 1938 and completion of the exterior occurred one year later in 1939. As a result, the chapel held services despite the interior remaining unfinished for several years.
Madonna della Strada Chapel exemplifies the "Modem Classical" style, which is related closely to the Art Deco style that proved to be a favorite architectural design during the 1920s and 1930s, especially in Chicago.  Art Deco derives its name from the 1925 Paris Worlds Fair -- the Exposition des Art Decoratifs -- that emphasized highly decorative modem architectural and decorative styles. Madonna della Strada Chapel possesses many characteristics tied to the Art Deco style, including both its overall form and use of abstracted Classical and geometric ornament. Included in the ornamentation are modeled images of religious symbols attributed to the four New Testament evangelicals: Matthew, Mark, Luke, and John.
Madonna della Strada Chapel also exhibits features associated with European modernism known as Expressionism, which combined Utopian hopes of social reform through architecture, including the use of glass and metal. Its influence can be seen in the boldly shaped and detailed front facade of the Madonna della Strada, as well as the visually striking rose window, the limestone-and-glass block apse, and the prominently fashioned bell tower.