The Gamewell fire alarm system along with paid firemen were established as the Washington Borough Fire Department in 1903. The building was created at the rear of town hall that housed the always on duty firemen. Even though there were only five men, they were considered to be the best. The men included a chief, two horsemen, an electrician and a driver. In the early 20th century, no fire has been too disastrous since the establishment of the fire company. As of today the Washington Fire Department has been relocated and has a second station too.

The Washington Borough Fire Department in 1909. 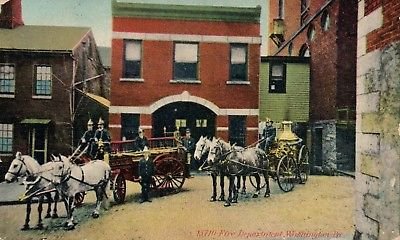