In 1900, construction began on a parochial grade and high school at the corners of North Franklin and West Chestnut Street. The Catholic school opened in September of 1901. It was considered one of the most modern and best-equipped school buildings in the diocese and served the parish and surrounding area for the next sixty-three years. The Sisters of Mercy of Pittsburgh lived in a convent built next to the school, which they staffed the school. Rev. Martin J. Hughes, who became pastor in December of 1911 had plans for a new church to be made. In 1915, he purchased additional property on West Chestnut Street next to the school. The new building was blessed and dedicated on September 1, 1930. The school is still running in the new location, behind the church but is named JFK and in replace of the school, a tire shop stands there now. 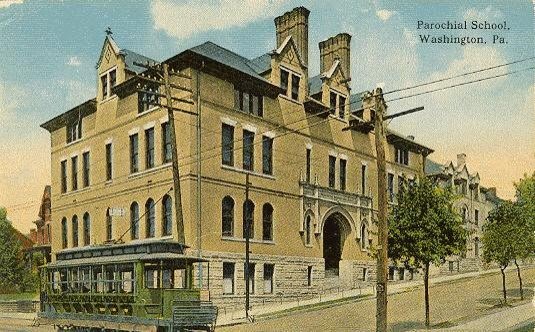