One of the most influential iron, and later steel companies in the United States, the Cambria Iron Company was established in 1852. The company grew to include five separate steelworks facilities in and around Johnstown. The company was acquired by Midvale Steel in 1916 and that company was absorbed by Bethlehem Steel in 1923. These ironworks produced a significant percentage of the world's iron and steel for over a century, but by the 1970s, this region saw fewer jobs in the steel industry owing to a variety of economic factors. The former Cambria works suffered the same fate as many other U.S. steel companies and its furnaces went cold in 1992. The most significant remnants of the Cambria steelworks are a few buildings from its Lower Works along the Conemaugh River which are the property of the Johnstown Redevelopment Authority. The Lower Works, along with other remaining buildings from its other plants were designated a National Historic Landmark District in 1989. In 2018, the Redevelopment Authority reached an agreement with the Center for Metal Arts of New York to open a metalworking and arts school in the former Blacksmith shop.

The two main buildings of the remnants of the Cambria Iron Company, the Blacksmith shop (with octagonal cupola) and the machine shop which sits behind it. 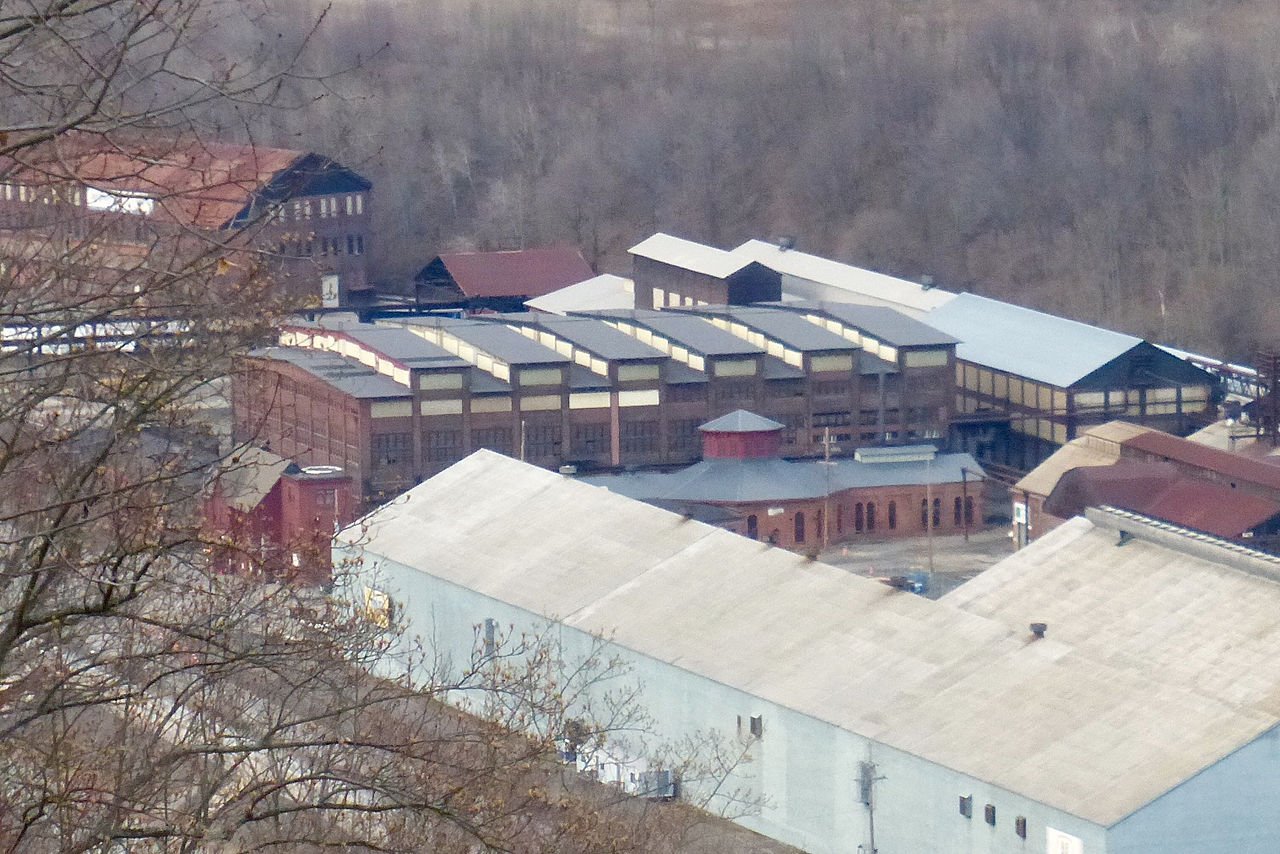 A ground level view of the 1864 Blacksmith and machine shops. 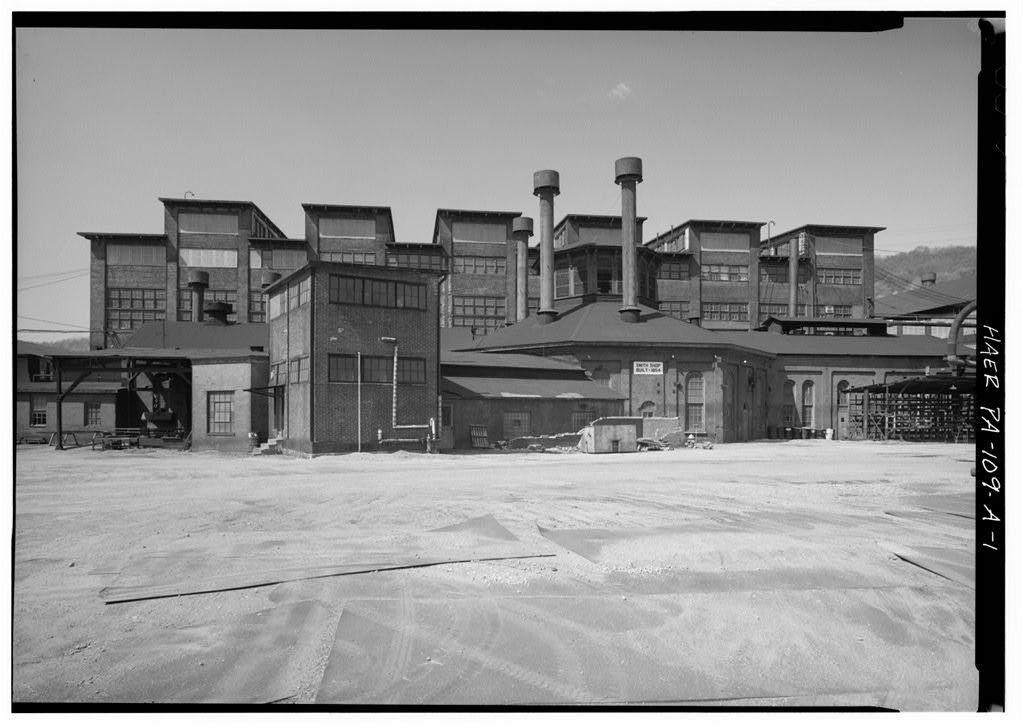 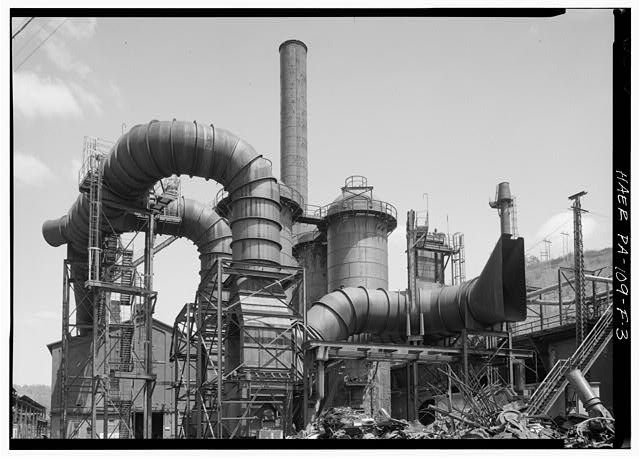 Inside the former Blacksmith shop. 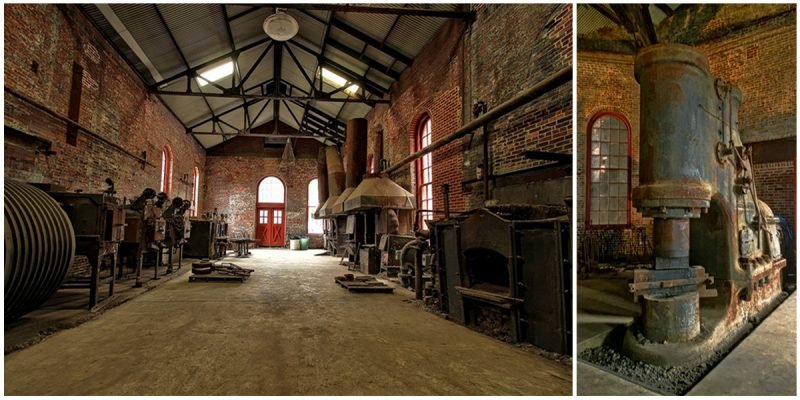 Anvils lined up within the Center for Metal Arts' school. 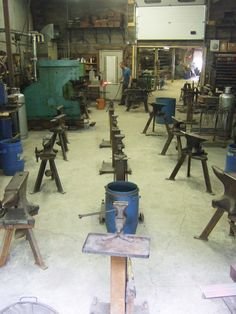 Blessed with the necessary components to produce iron (coal, iron ore, lumber, and a river for transportation) iron production came to Johnstown in the 1840s, migrating from southeastern Pennsylvania.  However, this production was limited to individual forges scattered throughout the region.  The founders of the Cambria Iron Company decided to consolidate production in the form of its Lower Works in 1852.  In doing so, Cambria Iron attracted thousands of immigrants to Johnstown to work in its foundries and mines, transforming Johnstown from a sleepy town of just over 5,000 in 1850 to an industrial city of over 30,000 by 1890.

Prior to the Civil War, Cambria Iron produced thousands of tons of iron rails that fueled railroad expansion throughout the northeast.  With the arrival of the Pennsylvania Railroad Company in 1854, Cambria Iron soon began to expand to meet demand.  By the 1870s it had the largest iron foundry in the country. The Gautier Works (which was destroyed by the Johnstown Flood in 1889), Franklin Plant, Rod and Wire Plant, and the Wheel Plant joined the Lower Works and the organization became the Cambria Steel Company in 1898.

It was around this time that the company began to experiment with the Kelly converter, built the industry’s first blooming mill and built one of the first works that utilized the Bessemer process to produce steel on a massive scale. Cambria Steel, as a result, helped usher in the steel age in America as it produced steel rails, rod, wire, railroad wheels, and I-beams for the country’s new skyscrapers.

The independent company was eventually absorbed by the larger Midvale Steel and Ordnance Company in 1916 and then by the even larger Bethlehem Steel in 1923. By 1973 it employed over 12,000 workers.  However, it was around this time the company decided to scale back production due to aging facilities, lack of access to adequate transportation, difficulty in complying with environmental regulations and increased competition from foreign steel.  By 1982 there were only 1,200 workers left and the Johnstown branch of Bethlehem Steel closed in 1992.

The Lower Works of the former company, with its Blacksmith shop that has sections dating back to 1864, is the largest section that remains.  The shop was built in five stages and features a raised, octagonal roof on its center section and five massive steam-powered hammers, to include a ten-ton model which is owned by the Smithsonian.  In 1998, the Johnstown Redevelopment Authority purchased several buildings, to include the Blacksmith shop, machine shop (1906) and carpenter shop.  The Authority was then able to acquire ten acres of land around the buildings when Bethlehem Steel filed for bankruptcy in 2003 with plans to clean up the site and eventually grant public access. In early 2018, the Redevelopment Authority reached an agreement with the Center for Metal Arts of New York to open a metalworking and arts school in the former Blacksmith shop.