Thirty Mile Point Light is a historic lighthouse in Somerset, New York located within Golden Hill State Park. No longer an active navigational aid, the lighthouse was completed in January 1876 out of hand-carved stone. It was given its name because it is situated 30 miles to the east of the Niagara River on the northernmost point of the lake's southern shore. It is 61 feet tall and the light could be seen 18 miles away; the foghorn could be heard 10 miles away into Lake Ontario (and five miles inland). The lighthouse was added to the National Register of Historic Places in 1984. Visitors can take guided tours of and even stay overnight in the lighthouse. It is also available to rent.

Thirty Mile Point Light was built in 1876 and can be visited from May to October. 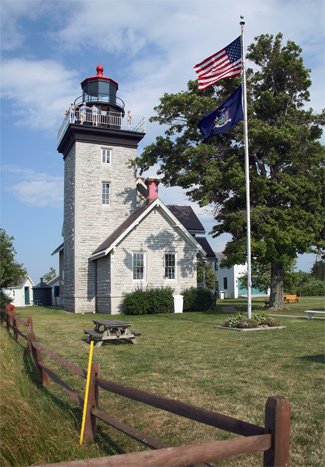 The light was built to warn ships of the dangerous shoals and to guide them as they sailed in this part of the lake. There were at least four ships that sunk nearby, the first of which was owned by the French explorer René-Robert Cavelier, Sieur de LaSalle (1643-1687). It sunk in 1678. Another notable ship was the British schooner called the H.M.S. Ontario, which was built in 1780 and was the largest warship on the lake at the time. It sunk in a blizzard near Thirty Mile Point a few months after being launched. The Ontario carried 88 men, including Lt. Colonel Bolton, who was the former commander of Fort Niagara, and a large payload of gold and silver. The shipwreck was discovered fully intact in 2008.

The lighthouse used a third-order Fresnel lens, which was manufactured in France. It emitted a flashing light every 90 seconds. This rate increased to every ten seconds in 1909. The living quarters for the keeper and assistant keeper and their families was designed in the High Victorian Gothic style. The foghorn was installed in 1921, although it was first requested in 1908. Management of the lighthouse was transferred from the U.S. Lighthouse Service to the Coast Guard in 1939. In 1958, the light was automated and Coast Guard personnel left. Golden Hill Park was established in 1962 but ownership of the lighthouse wasn't transferred to the New York State Office of Parks in 1984.