constructed in 1769, the Oliver House was once part of a substantial family estate in the town of Middleborough. Judge Peter Oliver built Oliver Hall for himself, and the smaller “Oliver House” as a wedding gift to his son, Dr. Peter Oliver, and his bride-to-be. The larger home was burned during the American Revolution because the Oliver family members were loyal to the British Crown. The smaller house remained standing. Over the years, the historic estate has been well-preserved and maintained so that it reflects its original appearance. 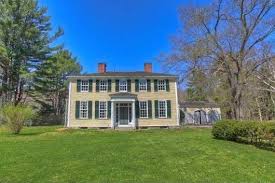 The “Small Oliver House” was built in 1769 for Dr. Peter Oliver, Jr., and his fiancé, Sally Hutchinson. Miss Hutchinson was the daughter of then Lieutenant-Governor Thomas Hutchinson. They were married in February 1770 and took up residence together in the stately home. Dr. Oliver established a medical practice in a small shop near the house.  His father, Judge Peter Oliver, had also operated an ironworks on the property. Remnants of the ironworks still remain at the Oliver Mill Park.

Three children were born in their home: Margaret Hutchinson Oliver in 1771, Thomas Hutchinson Oliver in 1772, and Peter Oliver III in 1774. The Oliver family also hosted several notable guests during their five years in the house. Sally’s father, the Lieutenant-Governor of the colony and therefore one of the most influential men in the area, was a frequent guest.  They also hosted Benjamin Franklin for a few days. There is a theory that the Loyalist Oliver family hosted Franklin in an attempt to sway him to their cause.

The Patriots’ quest for independence from the British was moving forward rapidly.  Dr. Oliver’s brother-in-law, Elisha Hutchinson, had been forced from his home in Plymouth by a Patriot mob that tried to stone him for his Loyalist perspective.  He fled to Middleborough in January 1774 to seek refuge.  A month later, Judge Peter Oliver (Dr. Oliver’s father) was impeached by the General Court.  In 1776, he sailed to London.  He died there in 1791.

In March 1774, an angry mob forced Dr. Oliver to sign an agreement that he would not accept any commission from the military governor General Gage.  Nearly a year later, he was forced by a second mob to flee to Boston (following the rest of his family). Finally, in April 1776, he left the country altogether.  He died in 1822.

The larger “Oliver Hall” was burned to the ground by the Revolutionaries. The smaller “Oliver House” that still stands on the property was claimed by the state and passed through several families before it was purchased by a distant family member in the 1940s. The house was in deplorable condition at the time.  The owners used the original flooring, molding, and staircases to restore the home to its Revolutionary-era magnificence. In 2016, the Oliver House was purchased by the Town of Middleboro and is currently managed by the Middleborough Oliver Estate Advisory Committee.

The Oliver House is available for public tours. Hours were not posted on the Facebook page, so it is recommended that visitors contact the Oliver House prior to stopping by.  However, they do advertise tours for paranormal investigations on a fairly regular basis.  Some tour dates are also listed on the Discover Middleborough site.