When this iconic Chicago establishment opened in 1927 as the Sevens Hotel, it was the largest hotel in the world with three thousand guest rooms. What made the Stevens unique was not simply its exceptional size, lavish ballrooms, and opulent dining facilities; the hotel design included a private restroom and an exterior window for every guestroom. This feature would become standard decades later, but this was not the only reason why owners James W. Stevens and his son, Ernest Stevens, would become famous. The entepenuers risked their fortune and millions from investors to build “a city within a city.” A hotel guest could enjoy shopping, entertainment, and services that included a hospital, bowling alley, miniature golf course, candy factory, numerous shops, 1200-seat theater, and a twenty-seven-chair barber shop. The hotel went into recievership in the early years of the Great Depression and was acquired by the US Army in 1942. Hotel magnate Conrad Hilton acquired the property and the Palmer House Hotel in 1945.

Once the largest hotel in the world, the Chicago Hilton opened in 1927 as the Stevens Hotel.

The hotel is renowned for its ornate lobby and ballroom. 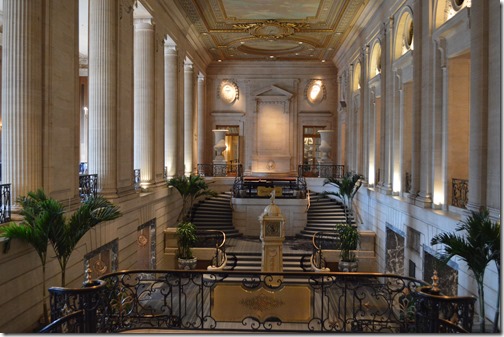 When the Stevens opened, it was one of the most luxurious in the world thanks to its innovative design that offered bathrooms and exterior windows for each o the three thousand guestrooms. 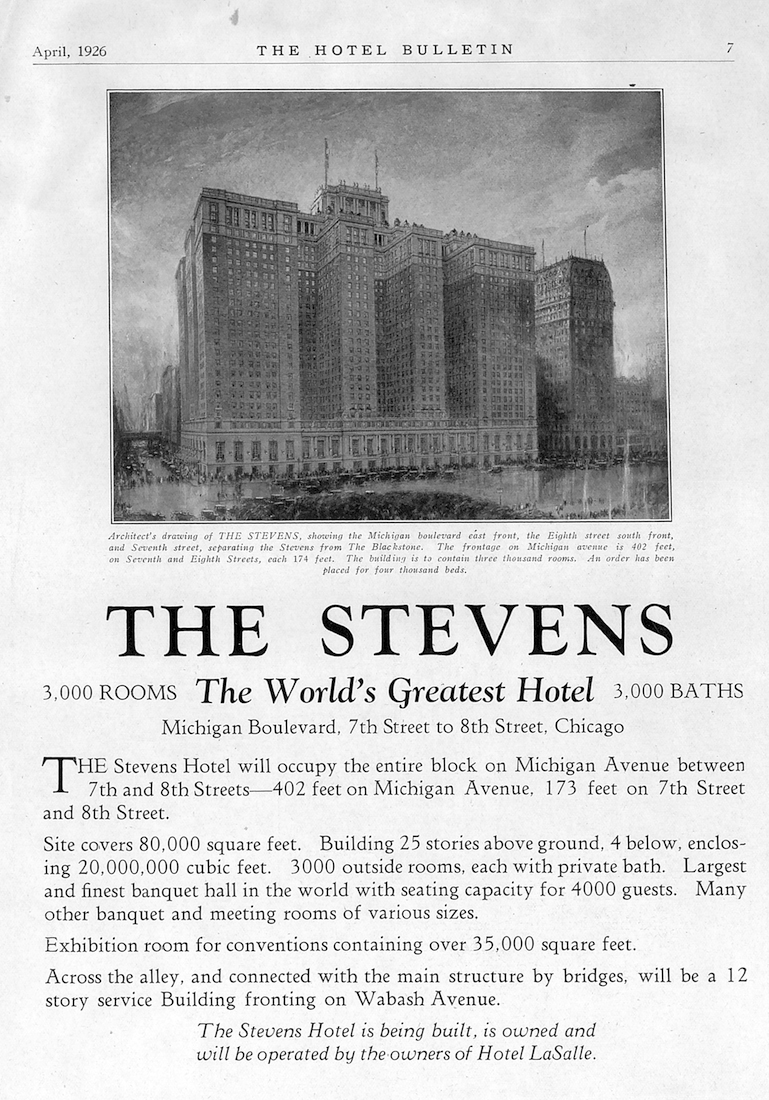 The hotel made headlines even prior to its opening thanks to its size and the publicity efforts of manager Ernest Stevens. Chicago Tribune, May 3, 1927. 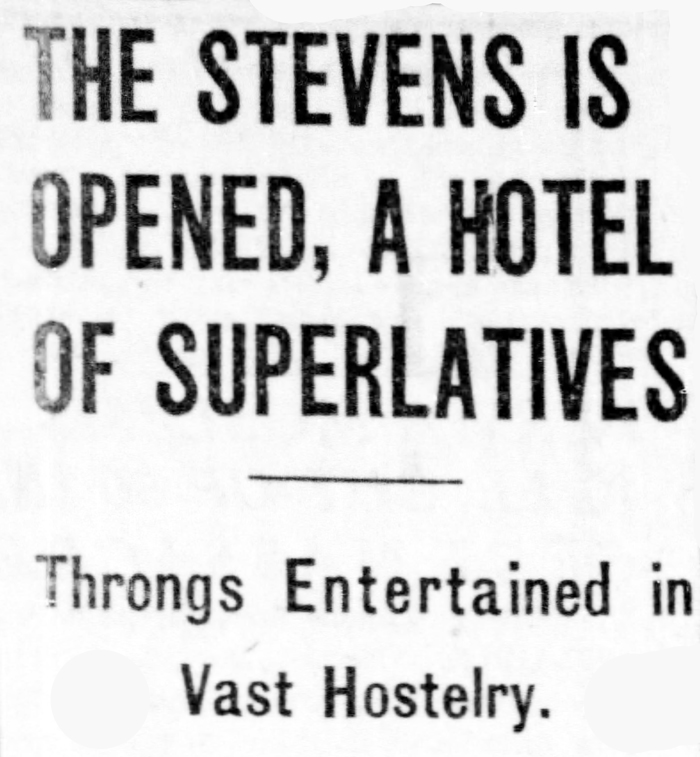 Raymond (left) and Ernest Stevens were the sons of James W. Stevens who made a fortune in insurance and other investments. Raymond committed suicide in 1933 and Ernest was convicted of fraud that year but later acquitted. 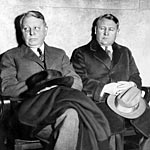 Ernest Steven operated the LaSalle hotel, a large and successful hotel at the corner of LaSalle and Madison, from 1909 until the completion of this hotel. After five years of planning and construction, the Stevens Hotel welcomed United States Vice President Charles Dawes as its first registered guest. The 1927 grand opening featured celebrities and was feted as one of the greatest nights in the history of the city. In its early years, the Stevens Hotel hosted countless movie stars, world leaders, and icons of the era such as Charles Lindbergh. Five years later, the Stevens Hotel sat empty while its bankrupt owners

Like most large ventures of the 1920s, Hotel Stevens was financed by private bonds. Construction and furnishing the hotel cost a total of $28 million, ten times more than Yankee Stadium. While business was good in 1928 and 1929, the interest from these bonds prevented the hotel from earning a profit. The stock market crash of October 1929, combined with the global depression, ended any chance of the hotel becoming profitable. The Great Depression saw the closure of eighty percent of American hotels, and with the fanfare of the hotel’s opening, the fall of the Stevens made national headlines.

With the hotel losing revenue throughout the early 1930s, the Stevens family operated the hotel and paid interest on its bonds using money he borrowed from his insurance company. By the end of 1932, Stevens had borrowed $13 million from his insurance company which led to its insolvency and a criminal investigation into the propriety of the loans to the hotel. J.W. Stevens suffered a stroke in 1933 while his eldest son committed suicide and Ernest Stevens was convicted of embezzlement and sentenced to prison. A year later, the Illinois Supreme Court overturned his conviction and Stevens found work as a hotel manager. His son, John Paul Stevens, graduated from Northwestern and was appointed to the United States Supreme Court in 1975.

The hotel was held in receivership and never returned the bondholder’s original investment. In 1942, the United States Army purchased the hotel for $6 million. Similar to many other large hotels that were purchased or leased by the military, the Army utilized the hotel as barracks for soldiers training in the Chicago area. In those years, as many as ten thousand soldiers were billeted in the former luxury hotel and the ballroom served as a mess hall.

Conrad Hilton purchased the hotel at the end of the war, along with the nearby Palmer House. The hotel would continue to be known as the Sevens until 1951, and while it was no longer the largest in the world, it became the largest combined hotel and convention center in the world in 1960 thanks to the addition of 53,000 square feet of meeting hall space. The hotel was completely remodeled in 1984 at the cost of $185 million. As part of this project, crews removed hundreds of walls that had once divided guestrooms in order to better compete with more recent hotels that offered significantly larger rooms. While this reduced the hotel from 3000 to 1544, the renovation allowed the historic hotel to better compete with modern luxury hotels and led to a unique feature where many of the Hilton’s rooms offer two bathrooms.

The hotel is best-known today for its ornate lobby and the Grand Ballroom. The lobby features wood paneling that was recovered from the French cruise-liner S.S. Normandie. The ballroom was one of the largest of its kind and an engineering marvel owing to its immense size and a design that did not rely on interior pillars. The first event held at the Grand Ballroom was the Motion Picture Association Ball in 1927, and today, the ballroom looks almost exactly as it did in 1927, with the exception of one missing chandelier. The location of that chandelier is unknown and its disappearance occurred during the three years when the Army owned and operated the hotel and used the ballroom as the mess hall. The rest of the chandeliers in the lobby are original and were made in Paris with crystal from Czechoslovakia.