Constructed in 1911 for the Chicago and North Western Railway, this building is now home to office and retail space. The structure is one of two remaining railroad powerhouses in Chicago, and the only remaining powerhouse for the Chicago and North Western. Thanks to preservationists and adaptive reuse, it stands as a monument to the thriving railroad industry that helped Chicago grow at a remarkable rate in the late nineteenth and early twentieth centuries, an era when the Chicago and North Western Railway operated as one of the city's most prominent railroads. The Powerhouse provided electricity and steam heat to an entire complex that included a terminal, standing passenger cars, switching station, nearby railroad facilities and more for more than a half of a century. 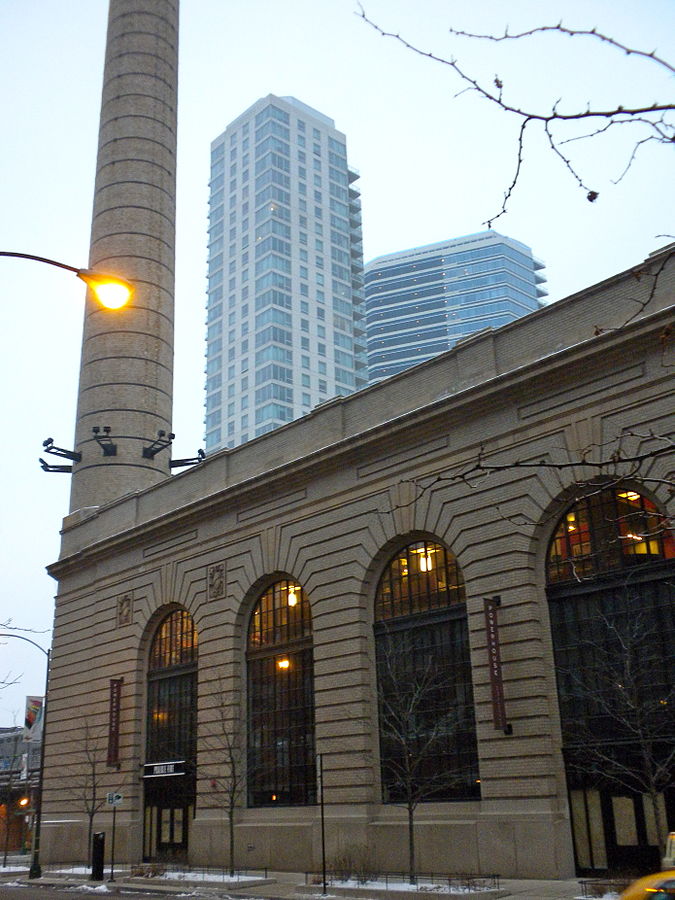 1911 Newspaper Clip: Chicago's CNW Railway terminal and powerhouse was ready in 1911. (From Chicagoology.com) 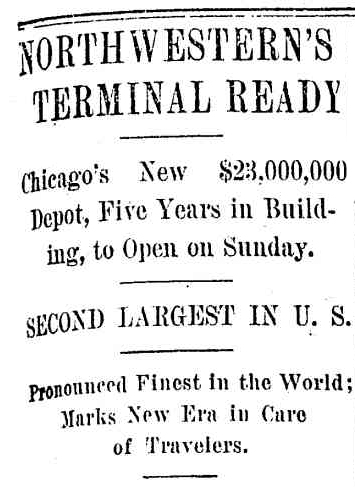 1912 Photo: On the far left (in the distance), the smoke stack marks the powerhouse, which is the only part of the complex that remains intact today. (Via Chicagoology.com)

Construction on the Chicago and North Western Railway Powerhouse finished in 1911,  the same year the terminal opened. Standing as an excellent example of Beaux Arts Architecture, incorporating Italian Renaissance Revival elements, the 227-foot brick smokestack speaks to the building's chief purpose; the Powerhouse generated power equivalent to what was necessary to serve 15,000 people. In addition to the large engine room and boiler room, the original four-room complex also included a small engineer's office and reception room.
The Chicago & North Western Railway Powerhouse operated as a massive energy facility that provided steam heat to the train station, the train yard, and various nearby facilities such the Interlocking Tower (where switching took place), freight houses, and the Erie Street Coach yard where passenger cars were kept heated prior to being used by passengers.  As well, the generator in the building provided electricity to the station, offices and all buildings associated with the Chicago and North Western complex.
The Powerhouse survives as a reminder of the intrinsic tie between Chicago's history and that of its railroads.  By the 1910s, Chicago had rapidly grown to become the nation's second largest city. Indeed, during the decade of the 1890s, Chicago's population increased by a remarkable 600,000. By, 1900, boasting of nearly 1.7 million people, Chicago ranked (for a short time) as the world's fifth or sixth largest city (depending on how it was measured). Much of that growth coincided considerably to its existence as a profoundly significant transportation hub, with the Chicago & North Western company serving as one of its principal actors. In 1864, Chicago and Northwestern absorbed the Galena & Chicago Union, which arose in 1848 as the city's first railroad. Between 1872 and 1910 the Chicago and North Western company's road's rail network grew from roughly 1,400 miles to nearly 10,000 miles.
The tremendous growth of the city, its nearby suburbs and expansive hinterlands, and the railroads forced the company to build a station capable of handling a substantial amount of passengers and freight, and it needed the power to manage it all; the need arose for what is now the historic Powerhouse.  Given the early 20th century still existed within the age of coal and steam power, the Powerhouse included boilers, super heaters, stokers, engines, compressors, pumps, oiling systems, turbines, generators, switchboards and electrical equipment, and of course coal and ash handling equipment.
The Powerhouse served the station until the 1960s. In 1984, the terminal was demolished, but the Powerhouse survived despite having been slated for demolition for many years. In fact, even after 1984, plans remained in place to destroy the Powerhouse, especially after the 1992 Chicago Flood that damaged many of the city's basements and sub-basements. However, a real estate developer purchased the historic building and financed its renovations which included structural repairs, adding two additional interior floors, and re-designing the interior to accommodate offices and retail spaces. As a result of the excellent work done to the building, Landmarks Illinois awarded the developer the Best Adaptive Reuse award in 2007.