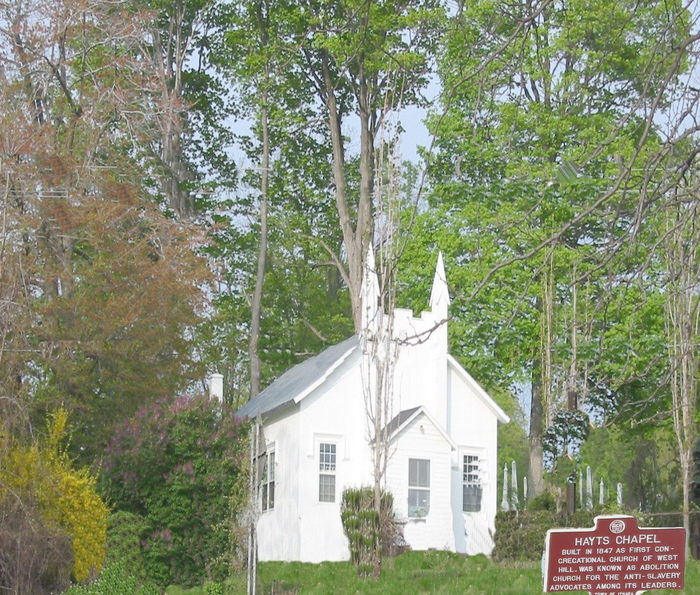 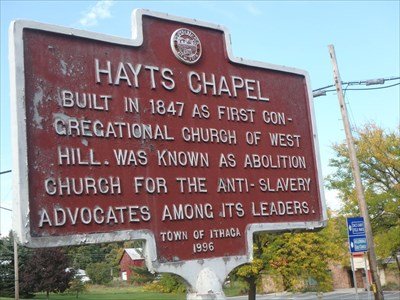 Ithaca's history as an abolitionist stronghold is well-known, but documentation of that history is lacking. In Ithaca, as in other cities known to be stops on the Underground Railroad, much of what is known about the actual people and places involved in aiding runaway slaves has been passed down by word of mouth with few written records.

Hayt's Chapel and Schoolhouse is one of those places. Much of what is known about the chapel's role in the Underground Railroad is due to a letter written to the Ithaca Journal in August of 1915 by George Johnson, a runaway slave who established himself in Ithaca as a barber. Johnson related the history of Hayt's Chapel, often known in the mid-1800s as the Abolition Chapel.

According to Johnson, the origins of Hayt's Chapel lie in the strong pro-slavery stance taken by William Wisner, minister of the Ithaca Presbyterian Church. Wisner apparently believed that slavery was Biblically ordained, a position with which a number of church members disagreed. In 1850, the Fugitive Slave Law was passed. The law offered a financial incentive for white people to apprehend any African American person--whether they were a runaway slave or not--and claim that they were a fugitive. The law was widely abused and was the breaking point between abolitionists and defenders of slaves in many places, including Ithaca.

In Ithaca, the views of Rev. Wisner as well as the controversy generated by the Fugitive Slave Act eventually led abolitionists in the Ithaca Presbyterian Church to leave the congregation. Foremost among those who left was Charles Hayt, who owned land on Trumansburg Road, which is believed to be a route used by fugitive slaves. The chapel was built in 1847, but apparently became known as the Abolition Church after Hayt and other members of the Presbyterian church left in protest. Hayt not only donated the land for the church and cemetery, but served as a deacon, and was rumored to shelter runaway slaves on his property.

When slavery was abolished by the Emancipation Proclamation in 1863, the congregants at Hayt's Chapel returned to the Ithaca Presbyterian Church, and the chapel gradually fell into disuse.

The schoolhouse that also sits on the property was built in the 1830s and was also on land donated by Hoyt. The school continued to operate until 1964. In 1971, the property was purchased by Rosalind and Salvatore Grippi, who are responsible for the buildings' preservation. Both the chapel and the schoolhouse are listed on the National Register of Historic Places.