The National Watch and Clock Museum was officially opened to the public in 1977 with fewer than 1,000 items. Since that time, the collection has increased to over 12,000 items and the museum has undergone several expansion projects. The Museum collection is international in scope and covers a wide variety of clocks, watches, tools, and other time-related items. The largest collection is of nineteenth-century American clocks and watches. However, additional collections include early English tall case clocks, Asian timepieces from Japan and China, and timekeeping devices from Germany, France, the Netherlands, and Russia.

The home of the National Watch and Clock Museum since 1977. 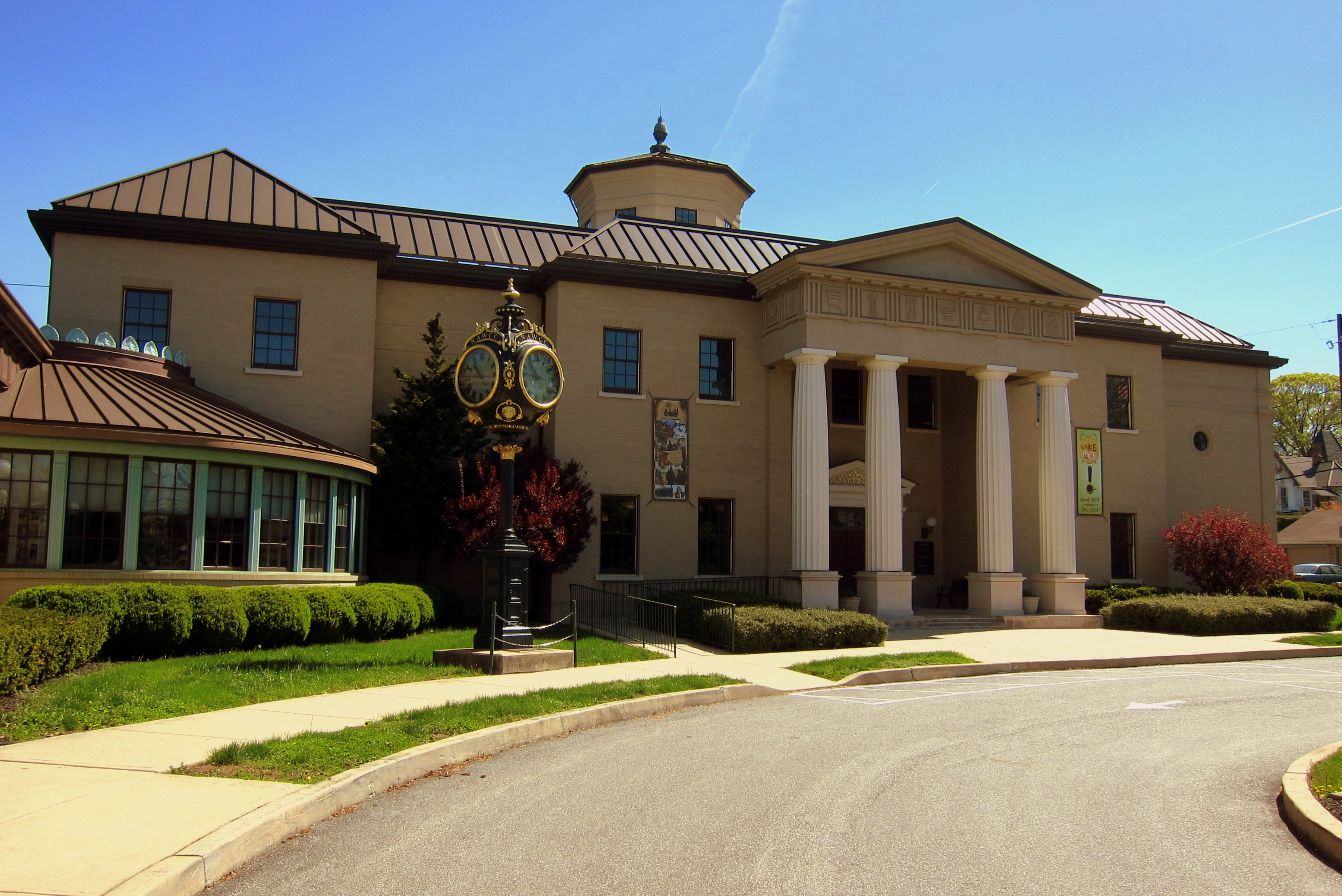 What time is it? Just a few of the clocks on display at the NWCM. 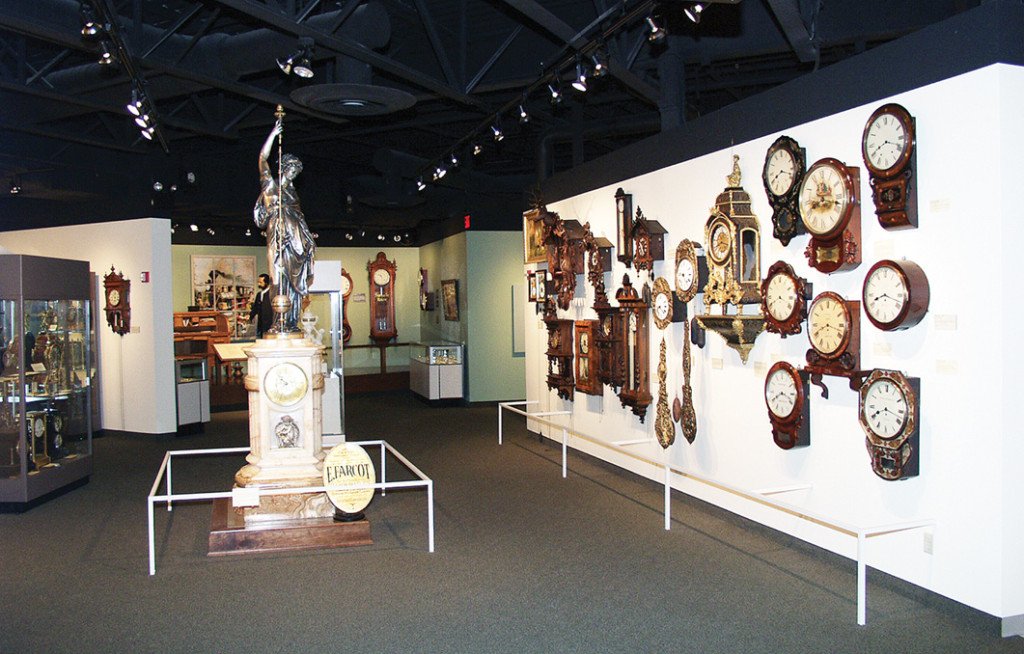 A few of the tall case, or grandfather clocks within the museum. 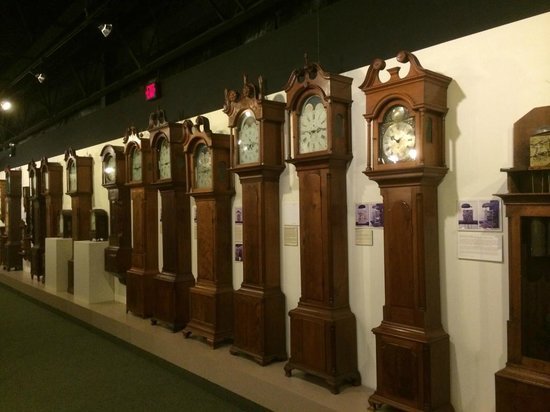 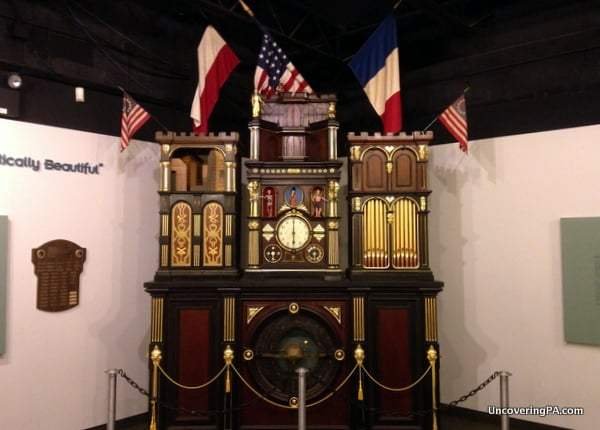 A close-up of a chess themed watch. 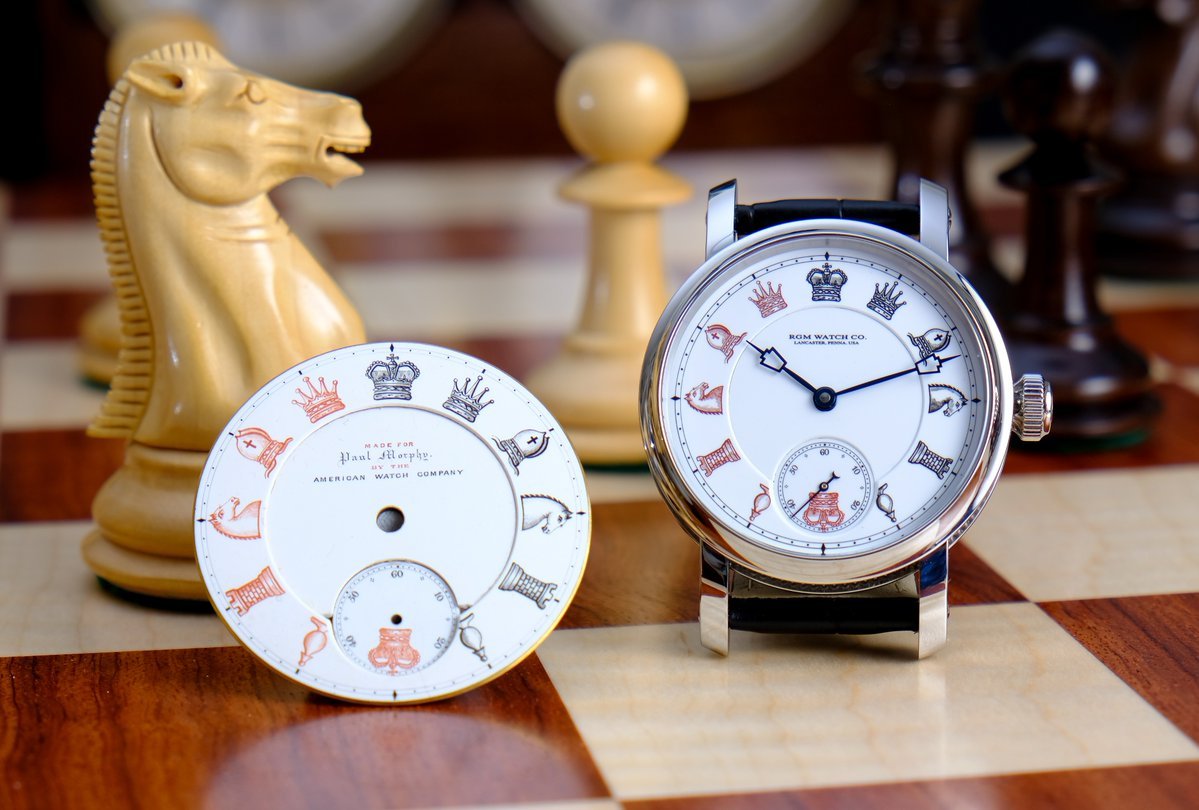 The National Watch and Clock Museum (NWCM) chose Lancaster County for its location due to the long tradition of time piece manufacturing in the area.  Numerous German immigrants to the county brought their affinity for and knowledge of watch and clock making with them and Lancaster County became the early timepiece manufacturing center of the country.  The Hamilton Watch Company was located in Lancaster from 1892 through 1969 when its manufacturing facilities were moved to Switzerland.  It is primarily for this reason that the National Association of Watch and Clock Collectors decided upon Columbia for the location of their museum.

Since 1977, the NWCM has been one of the largest and preeminent museums dedicated to horology (the history, science and art of timekeeping and timekeepers) in North America.  Its international collection of watches, clocks and related tools and machinery make it a truly unique museum.  The largest segment of its collection is made up of 19th century American clocks and watches, but there are also numerous timepieces from Japan, China, and Europe giving the museum an international flair.

Its 18,000 square-foot exhibit space takes visitors on a chronological (obviously) journey from the earliest non-mechanical time measuring devices, such as Stonehenge, sundials and hour glasses, to the most complex atomic and radio-controlled devices.  In between, patrons can learn about and view the earliest wrist watches, Japanese water clocks, German cuckoo clocks, astrolabes, English and American tall case (grandfather) clocks and just about every other timepiece imaginable.  Perhaps its most popular piece is the Engle Monumental Clock which was built by Stephen Decatur Engle over a 20-year time period.  At eleven feet tall and eight feet wide, this massive wooden clock features various chimes and 48 mechanized figures.  It traveled the Eastern United States after its completion in 1878 and then suddenly disappeared in 1951.  It was later located in a New York barn in 1983 and then purchased and fully restored by the NWCM in 1989.

The NWCM features permanent as well as rotating exhibits and recent ones have included “James Bond Wore the Quartz Revolution,” Railroad Displays,” and “James Borden Timeshapes.”  The museum also houses a Library and Research Center that contains over 30,000 books and periodicals, in various languages, devoted to horology and the philosophy of time.  Sure to be contained in their library is every volume of the Watch and Clock Bulletin, the NWCM’s bimonthly publication.  Finally, the museum offers various classes and hands-on workshops, such as its Make & Take Clock Workshops, as well as numerous special events, like its Hops ‘n Clocks beer tastings.

Hours vary by season, but the museum is usually open from 10-5 from Tuesday through Saturday, and 12-4 on Sunday