Located in a community that is widely regarded as the birthplace of the women's rights movement, the National Women's Hall of Fame offers exhibits that share the stories of women who have made significant contributions in a wide range of areas including science, sports, education, arts, business, government, and philanthropy. The organization was established in 1969 and is currently housed in the Helen Mosher Barben Building in downtown Seneca Falls. The Hall is the oldest membership organization in the country devoted to showcasing the achievements of women. In 2020, the Hall relocated to the newly renovated Seneca Knitting Mill. It is contributing property of the Seneca Falls Village Historic District, which is listed on the National Register of Historic Places.

The National Women's Hall of Fame was founded in 1969 and was located in this building until 2020 when it moved to the Seneca Mills building. 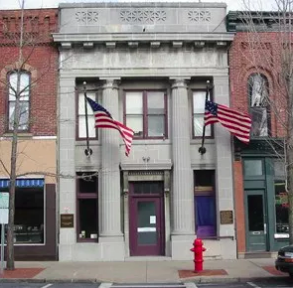 Part of the Hall of Fame's interior 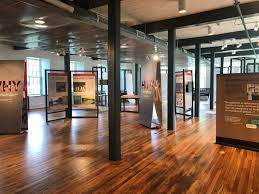 Since 2020, the National Women’s Hall of Fame in Seneca Falls, New York, has been located in the former Seneca Knitting Mill. The mill building was constructed in 1844, just four years before the Seneca Falls Convention was held nearby. The building is a fitting choice for the Hall of Fame, as many of the people employed at the mill were women, a common practice in the textile industry.

Multiple generations of Seneca Falls residents made their living at the mill, which primarily made high-quality socks. Former employees of the mill recall a family-like environment and the mill’s owner for much of the twentieth century, George Souhan, is remembered with genuine fondness. In the mid-1990s, however, the mill was purchased by North Carolina-based Ridgeview, Inc., and the new owners made a series of misguided business decisions that ultimately led to the mill’s closure in 1999. Seneca was the last of New York’s hosiery mills to shut down.

But the closure of Seneca Knitting Mill was not just another sad denouement for a once-thriving American factory. The mill had long roots in Seneca Falls, but it also had deep connections to the 1848 gathering of feminists in the city. A number of the young women who were employed there in 1848 attended the Seneca Falls Convention and two of the mill’s trustees were among the 32 men who signed the convention’s Declaration of Sentiments. Additionally, because many of the town’s residents were also abolitionists, they refused to process Southern cotton and only milled wool. The building’s floors still shine from having absorbed decades’ worth of lanolin from the wool that was milled there.

The National Women’s Hall of Fame was originally located in the Helen Mosher Barben Building, but it moved to the renovated Seneca Knitting Mill building in 2020. The building is a part of the Seneca Falls Historic District and is also listed on the National Register of Historic Places.

Lakamp, Patrick . "It's a Bitter Life:" The Seneca Falls Sock Factory Was a Piece of Americana. Now It's a Cautionary Tale to Workers Everywhere Who Suddenly Find Themselves Working Under a Distant Corporate Owner, Buffalo News . August 1st 1999. Accessed May 19th 2022. https://buffalonews.com/news/its-a-bitter-life-the-seneca-falls-sock-factory-was-a-piece-of-americana-now/article_f7865dc7-3566-50ca-b341-6f4ec4726814.html