One of downtown Chicago's most distinctive Jazz Age skyscrapers, this building is best known for its step-back tower design which was a result of a 1923 Chicago zoning ordinance that once again permitted the construction of tall skyscrapers but required the top quarter of the building to feature this design. The building was designed to serve as the headquarters of the Trustees System, a financial company that grew quickly in the 1920s but went out of business in 1933 - one of many leading financial firms that closed in the early years of the Great Depression. The building was the home to consulates from around the world, but it also stands as a reminder of the complexities involved with zoning laws and the broader ideas of socioeconomic urban development and the vulnerability to banks and financial firms owing to their dependence on depositors and timely payments by the people and firms to whom they lend. 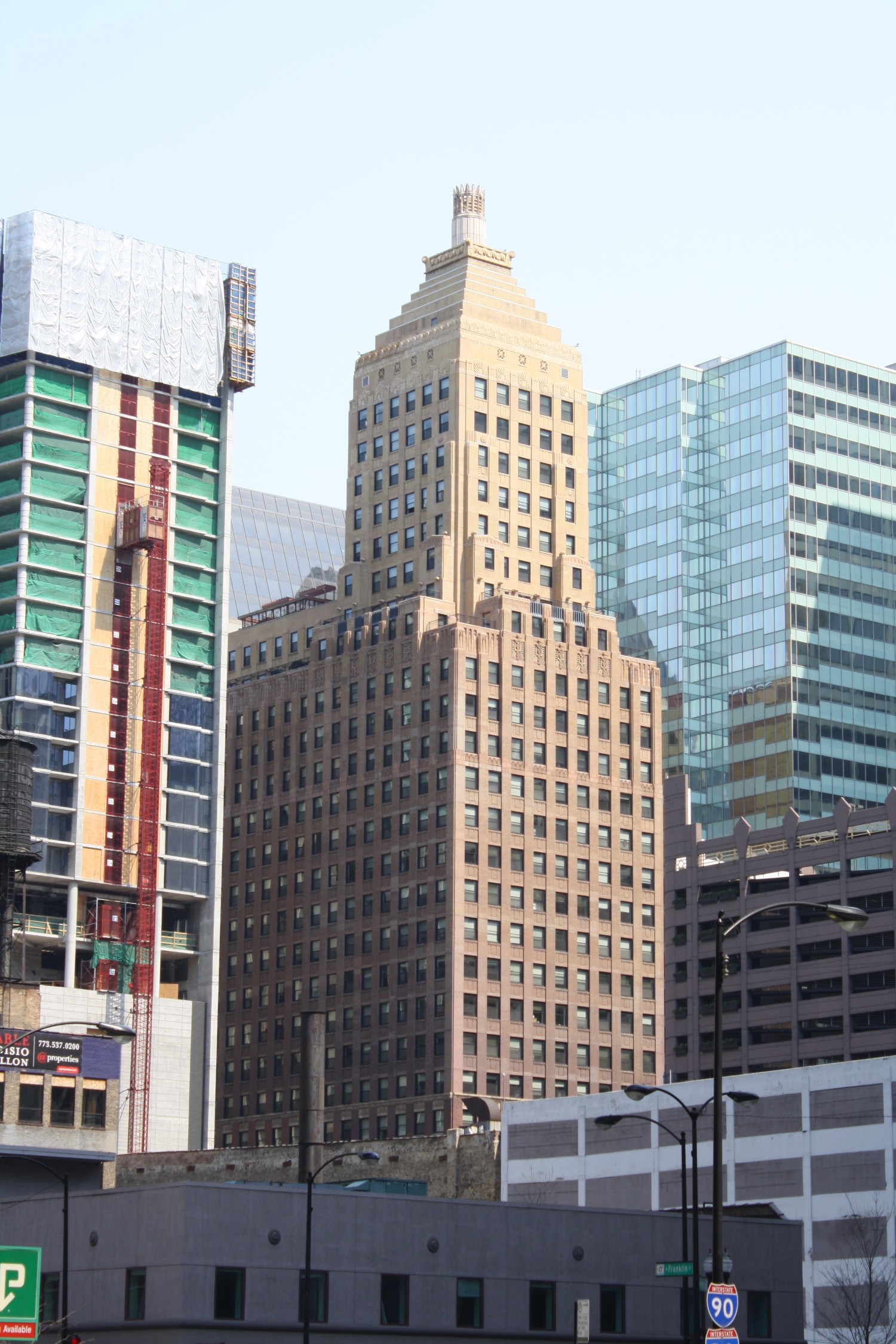 The twenty-eight-story Trustees System Service Building is one of Chicago's most distinctive "Jazz Age" skyscrapers, built in 1929-30 by well-known Chicago architects Thielbar & Fugard in the Art Deco architectural style and with unique color schemes on its exterior and interior. Serving as the headquarters to Trustees System, who specialized in home loans and investments during the 1920s, the building served as the home to businesses and consulates from several nations from Asia, Europe, and Latin America. Its size and design also speak to Chicago's 1923 zoning laws that led to buildings with peaks and towers and helped advance the development of Chicago's expansive downtown region. As well, the laws seemed to favor natives and European immigrant communities while displacing African Americans.
The Trustees System Service Building stands at the intersection of several of Chicago's elevated railroad lines ("The El"). It was visually striking when it was completed around the time of the start of the Great Depression, with its pale gold limestone at the building's base giving way first to darker red brick, then also lighter yellow-red brick towards the building's crown. Its office and banking lobbies also involved unusual color schemes, with finely detailed red and green marble walls.
The Trustees System Service Company, a private loan and investment bank founded in 1914 proved to be the precursor to many of today's Savings and Loan Banks. The bank specialized in consumer loans, allowing customers to deposit money that would build equity towards financing home mortgages; the company provided a loan for the remainder of a home purchase price once enough customers saved sufficient funds.
Chicago progressively grew into one of the nation's leading banking centers during the late nineteenth and early twentieth centuries, which included several institutions introducing modern banking techniques. The Trustees System Bank based its model on European banking systems. Its success afforded the company an opportunity to open twenty-four branches nationwide by 1929, with Chicago existing as its headquarters. That year, before the Stock Market crash, the company commissioned architects Thielbar & Fugard to build the now-historic Trustees SystemService Building as its principal office, completed in 1930 at the start of the Great Depression.
The Trustees System Service Company occupied floors two through four while leasing the remaining sections. The building quickly gained attention for its international flavor with tenants that included the Italian Chamber of Commerce, Mexico National Railways, and consulates from Belgium, China, Cuba, Dominican Republic, Greece, Honduras, Hungary, Italy, and Mexico.
The building's location away from the immediate center of the city (commonly referred to as the "Loop" due to the trains surrounding the area), led builders to expand outward along the Chicago River, partially due to recommendations made by a group led by Daniel Burnham; they composed the 1909 Plan of Chicago. However, that forced the city to address how and where commercial construction would occur.
Though the city had imposed height restrictions, its first true zoning law arose in 1923. The height restriction was eased, but skyscrapers could only exceed 264 feet through the use of set-back towers that comprised 25 percent of the building's total height. The Trustees System Building exemplifies the architectural designs common for designs seeking to comply with that 1923 ordinance.
The zoning laws included a noticeable pattern of favoring European immigrant neighborhoods and natives whereas African American migrants often found themselves in zones deemed sufficient for commercial construction. As noted in a study from a team led by economist Allison Shertzer of the University of Pittsburgh, reported by Chicago Magazine, "For every one-standard-deviation increase in the black population share of a neighborhood, there was a '27 point increase in the likelihood of the neighborhood being zoned for higher density.' For European immigrants, the more of them in a neighborhood, the less likely it was zoned for higher density."  Theories abound, but like in the case of restrictive covenants and the development of the Interstate Highway System, there at least seems to be strong evidence that favoritism towards whites and immigrants occurred with the creation of the zoning laws.
Nevertheless, once the zoning laws came to fruition, the Trustees System Service Building became one of many that eventually led to Chicago's vast, architecturally-rich downtown region with building occurring even during the Great Depression. However, the Depression hit banks hard, and the Trustees System was one of the era's victims, declared insolvent after the 1933 "national banking holiday." Metropolitan Life Insurance Company purchased the building after the Trustees foreclosed, followed by the First National Bank of Chicago, and then several other institutions and businesses until it evolved into an apartment and condominium complex.