The Old Chester Courthouse was built in 1724 and is the oldest standing courthouse in the U.S. 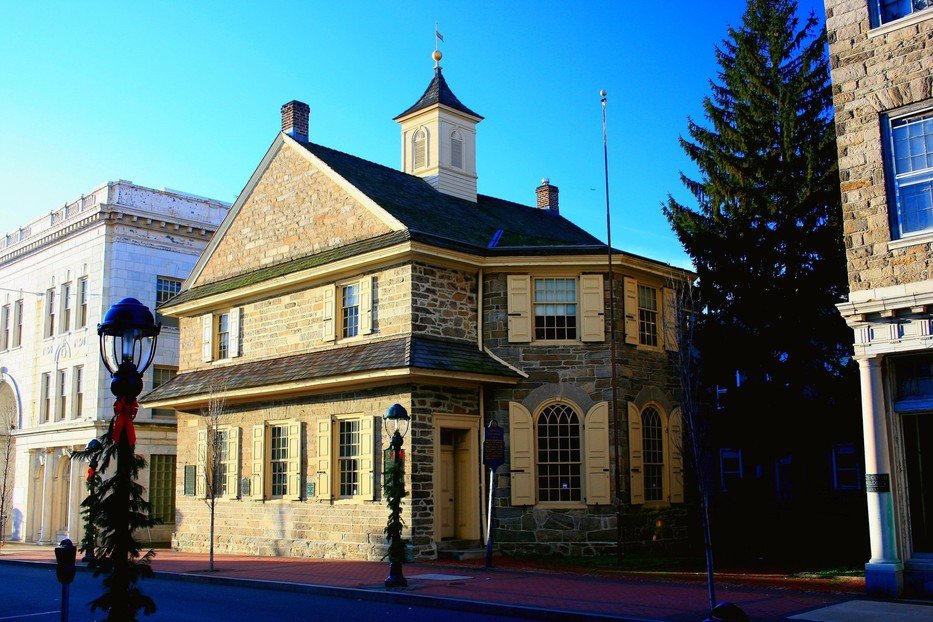 A close up of the Judge's Bay, which was added in 1744 and the historical marker that tells a brief history of the courthouse. 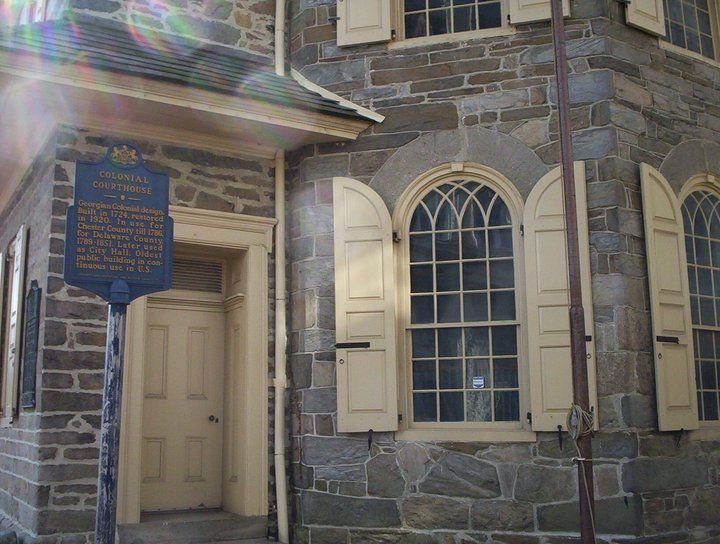 A vintage postcard of the Old Chester Courthouse. 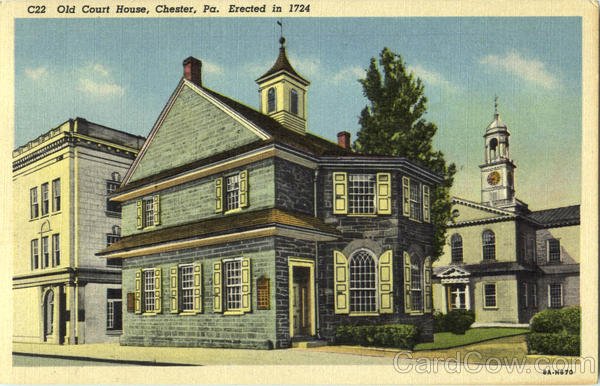 A group of dignitaries inside the courthouse. The judge's bench once occupied the space directly behind them. 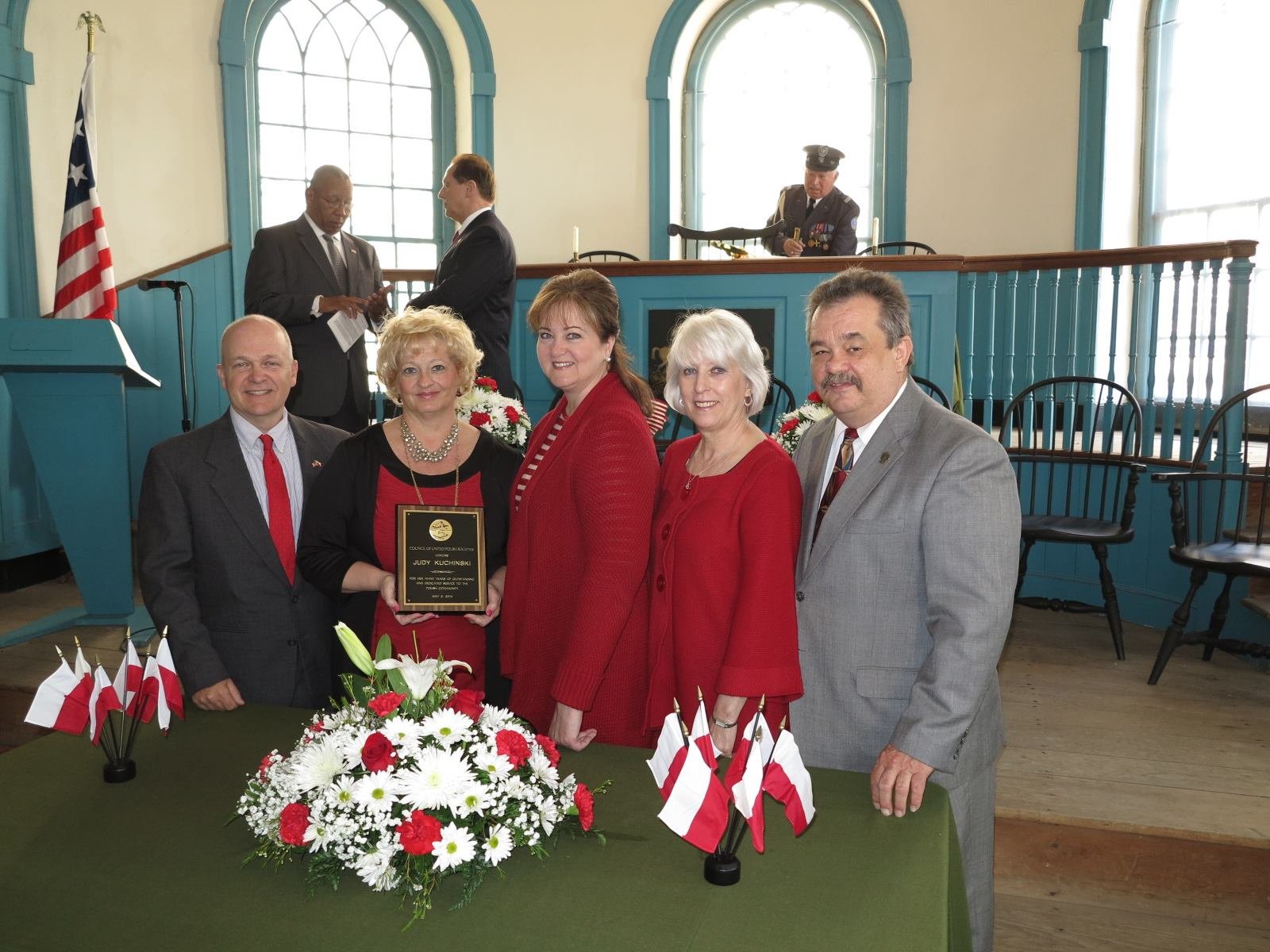 Prior to his death in 1718, William Penn laid out the first three counties in what would later become the state of Pennsylvania: Philadelphia, Bucks, and Chester.  Five years later, the leaders of Chester County decided they required a new courthouse in which to conduct their legal business.  Thus, in 1723, money was allocated and construction began on the county’s fourth courthouse.  Unfortunately, historians know little else about the planning process.  Even the architect’s name has been lost to history. Although, it does have Quaker influences as evidenced by its twin doors, one for men, the other for women.  The small courthouse (it’s first floor courtroom only measures 31’x36’) was completed in time for the court to hold its 1724-25 session within its stone walls.

The 2.5 story courthouse is comprised of a combination of hewn and rubble stone and features two-foot thick walls and a slab stone floor in its courtroom, which was divided by a low wooden railing. The second floor was home to the court’s jury rooms, each of which included a fireplace. Its roof includes two chimneys at each end and a center copula that is home to a bell that was cast in London and added in 1729.  A large, three-sided bay with arched, multi-pane windows was added in 1744 and is known as the Judge’s Bay as it came to accommodate the raised judge’s bench which expanded the size of the courtroom.

Shortly after the Declaration of Independence was signed in the Pennsylvania State House (now Independence Hall), copies were made to be transported to the state’s county seats, to include Chester.  On July 8, 1776, a copy arrived at the Old Chester Courthouse and was read to the public from a second-floor window.  After that reading, the courthouse’s bell chimed for almost half-an-hour, the same bell that resides in the cupola today.  The courthouse’s famous bell had, for unknown reasons, been removed and then replaced during renovations in the early 1920s.

In 1789, Chester County was divided, creating Delaware County, in which, the town of Chester now resides.  Thus, the courthouse ceased being the seat of Chester County and served the same role for the newly created Delaware County.  By the mid-nineteenth century, the county’s needs had outgrown the small courthouse and the county seat was moved to Media in 1851.  The courthouse then took on the new role of City Hall for the town of Chester.  Eventually, business interests sought the land that the courthouse sat upon and plans for its demolition cropped up in 1917.  However, Governor William Sproul not only saved the old courthouse but raised money for its restoration in the early 1920s.

The courthouse then became home to the Delaware County Historical Society until structural issues forced its abandonment in 1966.  It was the nation’s oldest serving courthouse until 1967 as it held one trial per year to hold that distinction.  Currently, the Old Courthouse is home to the Chester Community Improvement Project, a non-profit community housing organization.