The James Monroe Museum and Memorial Library in Fredericksburg, Virginia, was established by his descendants in 1927 and is currently operated by the University of Mary Washington. It is located close to the site of James Monroe’s law office from 1786 to 1789, in a building constructed between 1816 and the 1840s. The museum is open year-round with multiple exhibits on President Monroe, describing his early colonial days as a Revolutionary soldier to his time as President and beyond. James Monroe served as the fifth President of the United States from 1817 to 1825 and is best remembered for his contributions to American foreign policy in the Monroe Doctrine. Throughout his life, Monroe was ubiquitous in the major events of the young country: he served in the American Revolution, as Governor of Virginia, as Minister to France, and as Secretary of State and Secretary of War during the War of 1812. The museum has the world’s largest collection of original Monroe artifacts and documents, many obtained directly from his family. 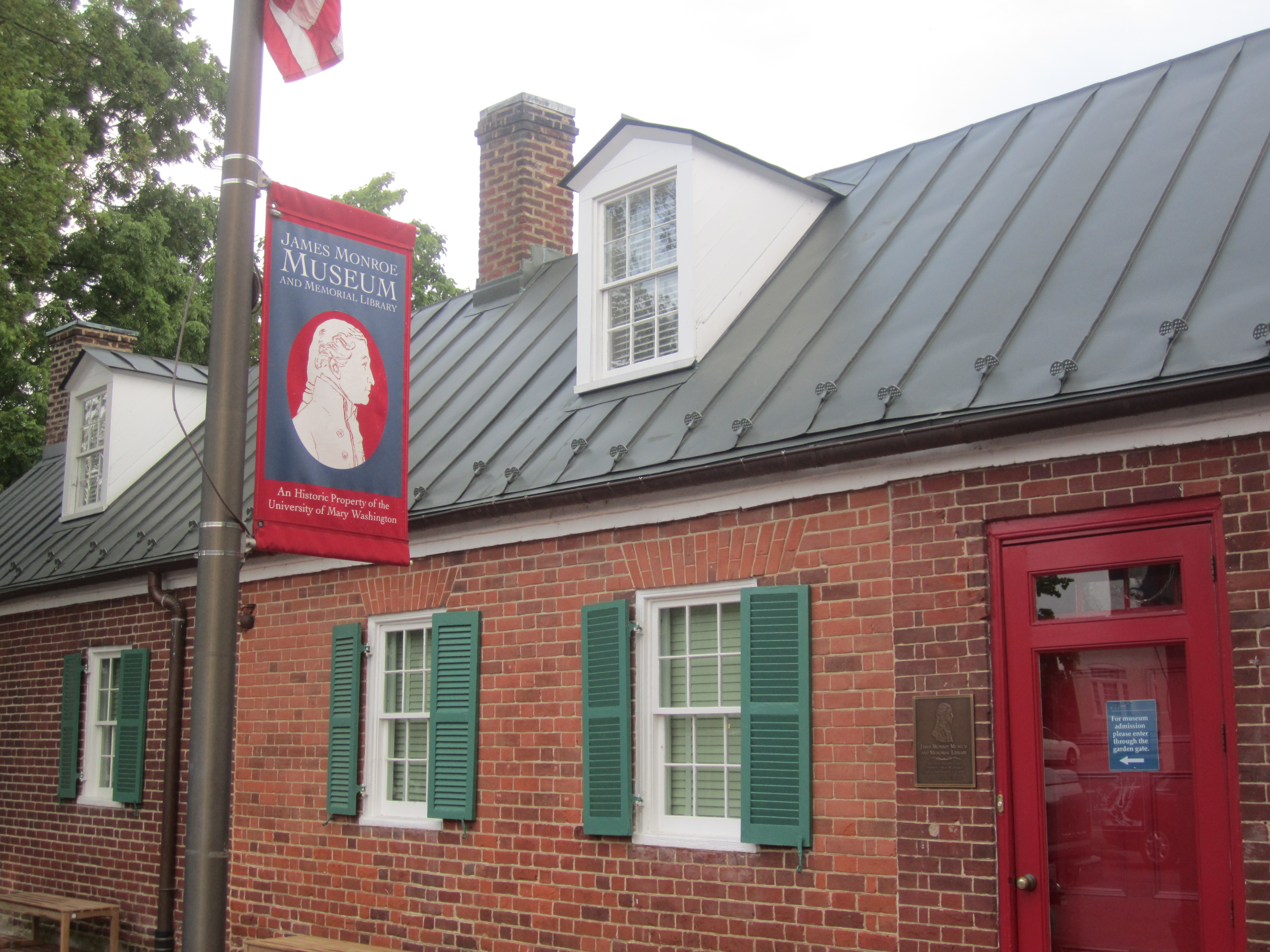 The building previously believed to have been James Monroe's law office, and currently serving as the James Monroe Museum, sometime approximately between 1920 and 1950 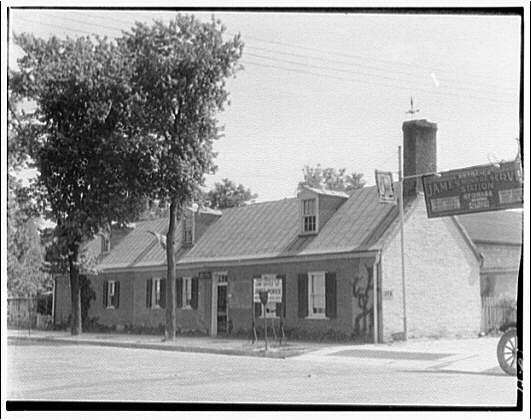 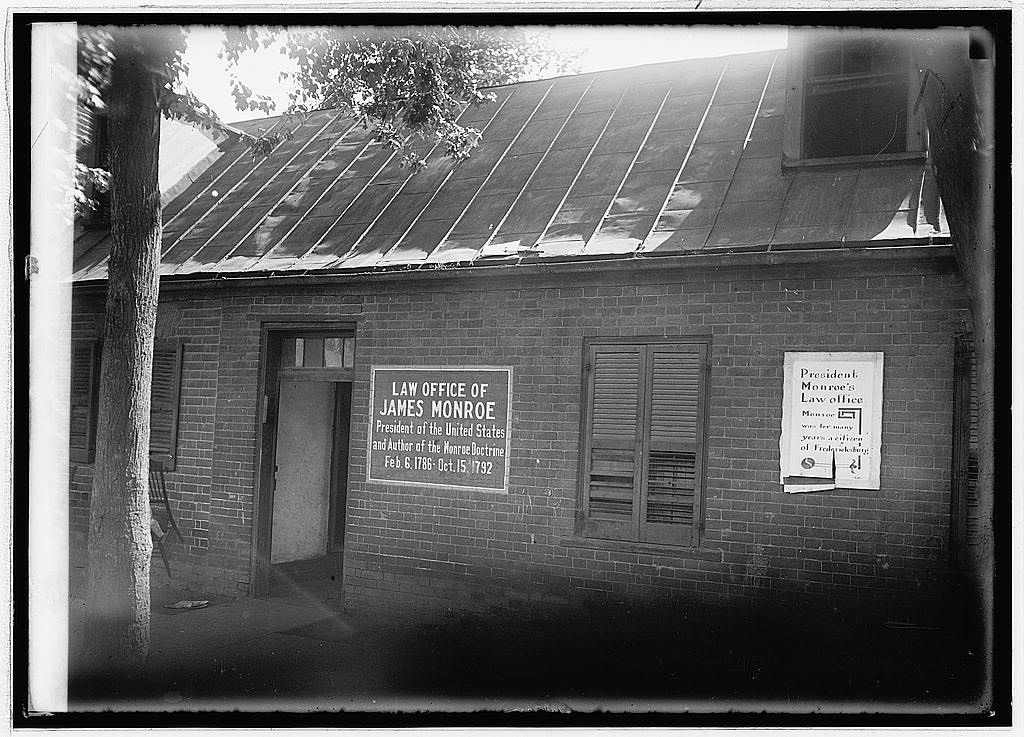 A lantern slide of the museum building, from circa 1927-29 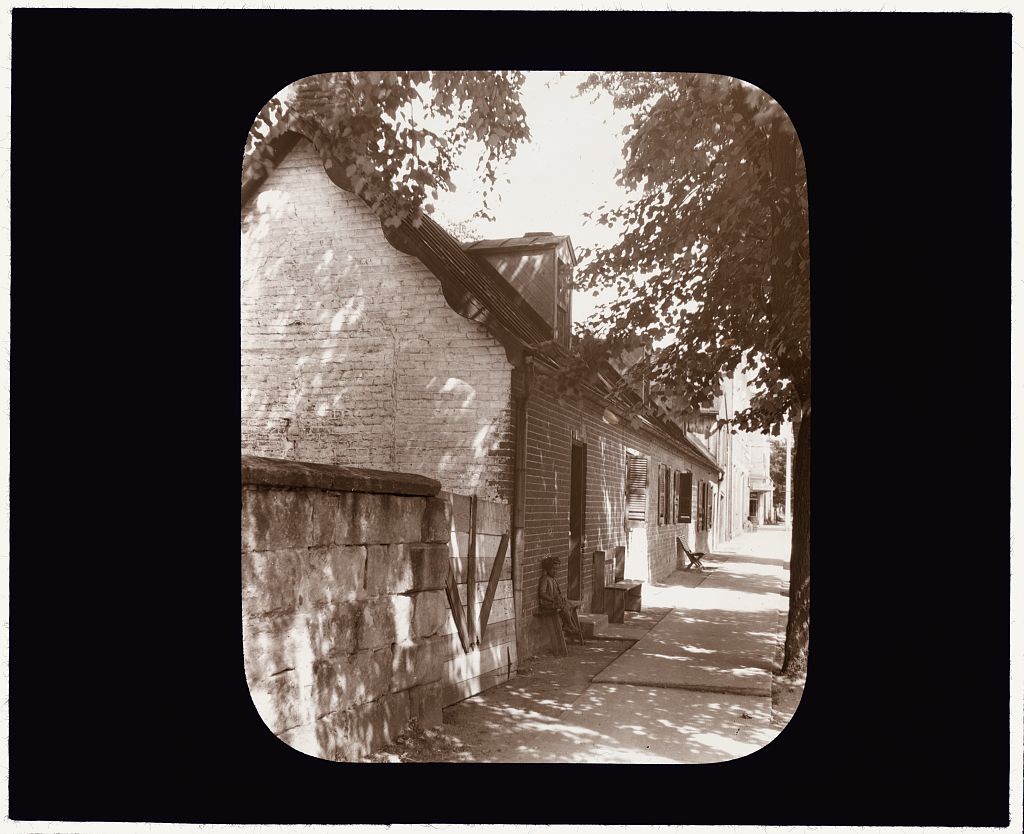 Circa 1819 portrait of James Monroe by Samuel F.B. Morse 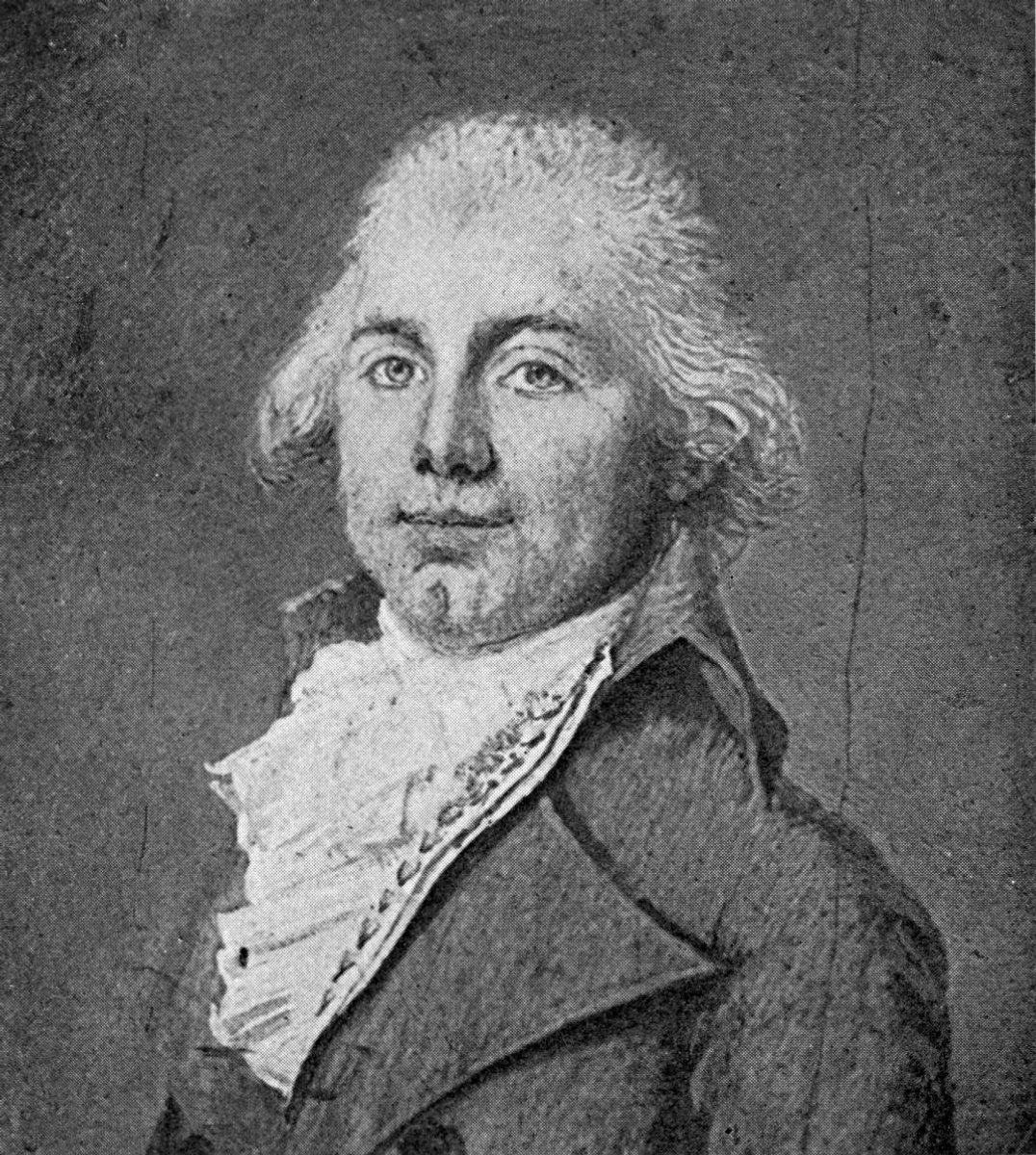 The Bureau of Engraving and Printing portrait of James Monroe 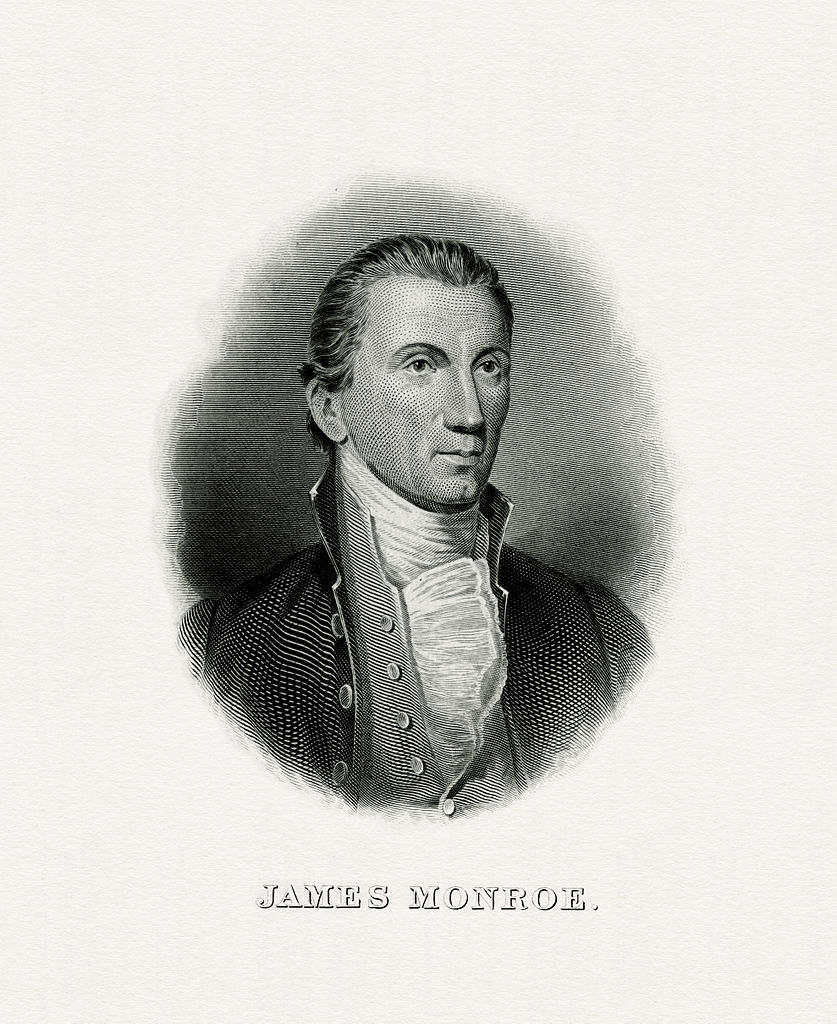 1816 or 1820 portrait of Elizabeth Kortright Monroe by Eben F. Comens after John Vanderlyn 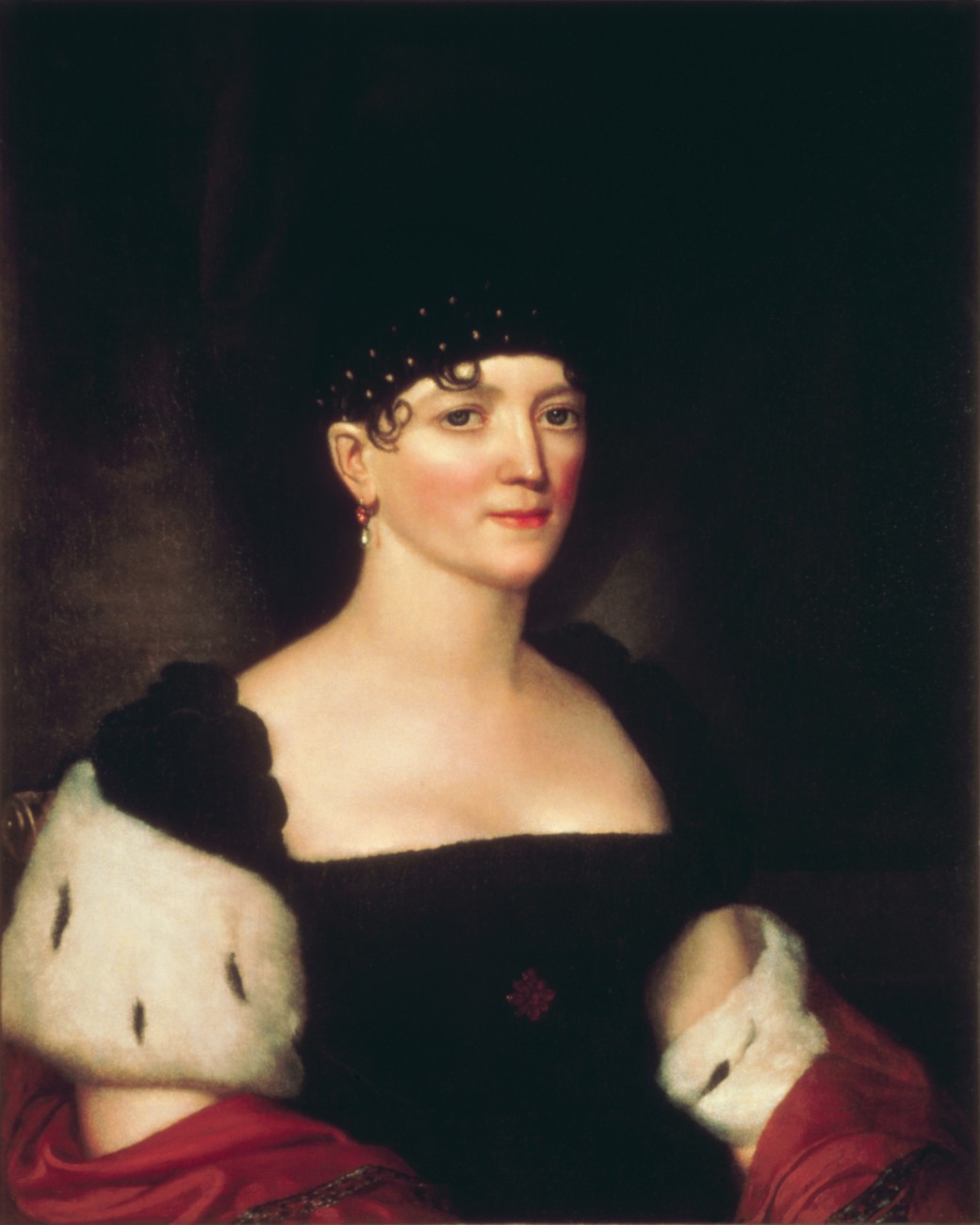 James Monroe was born in Westmoreland County, Virginia, in 1758. He briefly attended college at William & Mary before leaving to join the Revolutionary War effort. He served at the Battle of Trenton in 1776, where he was injured, and was present as a Lieutenant Colonel with George Washington at Valley Forge. After the war, Monroe served in the Virginia state legislature, the Confederation Congress, the Virginia Ratifying Convention (he initially opposed the Constitution), and the United States Senate, and as Minister Plenipotentiary to France, Governor of Virginia, Secretary of State and Secretary of War under President Madison, and President from 1817 to 1825. In 1786, after his marriage to Elizabeth Kortright, he and his family moved to Fredericksburg, where his family lived until 1789. Monroe ultimately died on July 4th, 1831.

He was an influential leader during many integral events in America’s early history, from the Louisiana Purchase to the War of 1812 to the “Era of Good Feelings.” Monroe is most famous for his eponymous Doctrine, which declared the United States’ opposition to any European colonization in the Americas. (The Museum currently displays a circa 1795 desk that is rumored to have been the place where he wrote out the Monroe Doctrine.) Also while President, he signed the Missouri Compromise, a bill intended to settle the dispute on the number of free and slave states. As a result of the Compromise, the new states of Missouri and Maine became slave and free, respectively. Slavery was also banned in states in the northern part of the Louisiana Purchase. This balancing act was characteristic of Monroe’s views; he struggled with the conflict between slavery and America’s founding ideals. He also believed that any attempt to end slavery would tear apart the country, and, as such, held to an expansive view of states’ rights while also supporting Congressional debate. (His optimistic middle way ultimately failed, and, as he feared, the country fell into the Civil War.) Monroe was also an advocate of African American resettlement colonies and a sympathizer of the American Colonization Society. They sponsored and promoted such a colony in Liberia, and its capital was eventually named Monrovia after James Monroe.

The Monroe museum was founded by his descendants in 1927. Monroe’s great-granddaughter, Rose de Chine Gouverneur Hoes, purchased a building believed to have been his Fredericksburg law office from 1786 to 1789 when it was about to be demolished. She used the structure to house some of the family’s large inherited and purchased collection of Monroe artifacts. The James Monroe Museum and Memorial Library was organized by her son, Laurence Gouverneur Hoes, in 1948. He built an addition to the building and converted the structure into a proper museum. He added to the collection and ultimately turned the museum over to the Commonwealth of Virginia, which eventually passed it to the University of Mary Washington. The “James Monroe Law Office” was added to the National Register of Historic Places and designated a National Historic Landmark in 1966. However, it has since been discovered that the structure, actually three separate buildings connected later, was built between 1816 and the 1840s and, as such, could not have been the home of Monroe’s law practice. The central building was an early nineteenth-century attorney’s office, however, and Monroe’s office was located very close by on Charles Street.

Today, the museum preserves and displays the Monroe family’s collection of heirloom furniture, James Monroe’s papers and effects, and other important historical artifacts. It is dedicated to researching the story of James Monroe and educating visitors about his life and legacy via its exhibits, archives, events, and online resources.