The Ambassador Apartments feature the Italian Renaissance style and was designed by a Hartford architectural firm and constructed between 1817 and 1921. 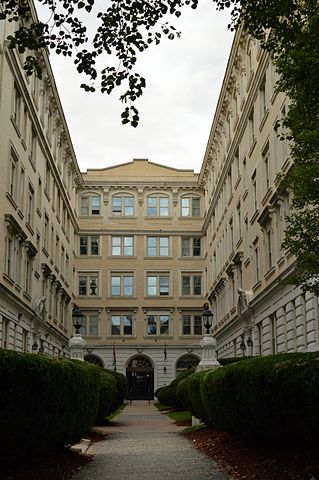 The interior of the Ambassador Apartments building features long hallways that stretch the full length of the building on either side. A lobby is located in the center of the building in the “hyphen” of the H-shape design. While the interior design has undergone numerous renovations for livability standards, the general layout is still very indicative of its past.

Prior to this building, several other structures were located here. At least as early as 1880, Pliny Jewell, a Hartford property developer, owned a stretch of property that extended from the current location all the way up to Niles Street to the north.  The Jewell family owned and operated the Jewell Belting Company, the greatest holding of which, at the time, was a massive estate house on the site that would later house the Ambassador Apartments.

This estate house housed multiple members of the Jewell family at times but also, notably, served as the official residence of Governor George L. Lilley, who died shortly after moving into the estate.  The Jewell family would remain in possession of the estate following the Governor’s death until 1912, at which point the property changed hands numerous times.

Following the first sale of the property to Dunn & Waterman, it was then bought by Colonial Real Estate, Warren D. Chase of Back and Chase, and, finally, Nicolo Carabillo.  Carabillo would, through a questionably legal process, be the real estate developer responsible for creating the Ambassador Apartments as they appear today.

Carabillo originally acquired a building permit for a small tenement building on the site of the current Ambassador Apartments.  What Carabillo actually built was a massive building with over six times the occupancy he had originally reported to the city.  Designed by Berenson and Moses in three stages of building, the Ambassador Apartments was an undertaking of truly unexpected proportions.  Nicolo, hoping to create a truly luxury residence, pushed for grand designs including an extremely unique offering at the time: view of the outside from all apartment units.

Nicolo’s goal was to have additional facilities located on site to serve the residents.  He originally boasted plans for a barber shop, bowling alleys, and gardens, and, while he did ultimately deliver on some of these, a major fire slowed down the development of the property, resulting in bowling alleys being foregone for two further shops.  There was an immense dining room designed for both mass accommodations and to serve as a dance floor for the residents.

The Ambassador Apartments held two names before it was known by its most famous title.  At groundbreaking, it was known as Jewell Court, later having its name changed to Hotel St. Nicholas.  The Hotel St. Nicholas was by no means a financial success, and Nicolo sold the building just over 10 years after purchasing it.  It was renamed to Ambassador Apartments during the process of this sale.

The buyers, Max Myers and Samuel Gross of Ambassador Realty Company, purchased and operated the apartment complex from 1925 until 1953, at which point it was sold again to the Gateway Company, who began the first major renovation since the post-fire repairs decades earlier.  The Gateway Company sold the building again a few years later for two-hundred thousand more than they purchased it for.

The Ambassador Apartments provide a unique insight into the changing standards of urban housing in New England over the course of a century while granting concrete evidence of the economic, demographic, and even aesthetic changes of Hartford across so many years.  Because of this, it is a foundational building in the Asylum Hill District of the city.