On April 1, 1960, a group of twenty-four Burke High School students staged a sit-in at the S.H. Kress & Co. lunch counter. This was the first large-scale direct-action campaign against racial segregation in Charleston, and it became the catalyst that spurred the local African American community into organizing additional protests. The Kress Co. operated in the building until 1980 and it presently houses a Williams-Sonoma store and private offices. The Charleston Preservation Society unveiled a marker commemorating this historical event on April 4, 2013. 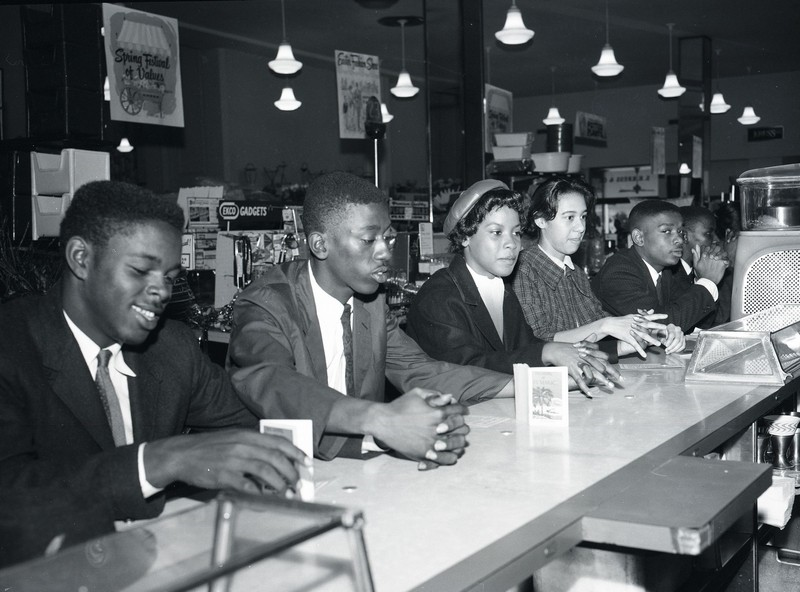 Civil Rights sit-ins spread throughout the South following the sit-in at Greensboro, North Carolina on February 1, 1960. On that day, four African American students from the North Carolina Agricultural and Technical State University sat down at the Woolworth lunch counter and asked to be served. They were denied, but they returned with more students, and the growth of their protest and their eventual success spurred a plethora of similarly segregated lunch counter sit-ins. The majority was staged at either Woolworth’s or Kress’ lunch counters.

Because both the College of Charleston and the Citadel were segregated at the time, students from Burke High School stepped up to the challenge. After two months of planning and preparation by the local NAACP in nonviolent resistance, the students, dressed in their Sunday best, headed to Woolworth’s on April 1, 1960. The date was chosen not only to be two months after the initial Greensboro sit-in, but because there was no school that day.

However, management at Woolworths had prepared in advance and made sure that the students could find no room to sit at the lunch counter. As a result, they moved on to Kress which was part of their plan should they find no open seats at Woolworth. The students were able to find seats to occupy there. The students politely asked to be served and were denied. Seats were removed to prevent more from joining in the sit-in and ammonia was poured on the counter in an attempt to get them to leave. After 5½ hours of reciting Psalms 23 and the Lord’s Prayer or humming songs, the students were arrested and charged with trespassing. Bail was set at $10 each. The charges were later dropped.

This action became the catalyst for a more invigorating Civil Rights Movement in Charleston. Prior to the sit-in, the African American community was largely quiet for fear of retaliation. But once the students had stepped forward, most of the adults were spurred to support the movement.

The S.H. Kress & Co. built the building at 281 King Street in 1930. As with many of their buildings, it features the Art Deco style of architecture.