The Thomas H. Gale House is one of three houses that sit on Chicago Avenue in the Chicago suburb of Oak Park, Illinois. What sets apart these three houses, and a few others in the same neighborhood, is the fact that they were secret commissions by Frank Lloyd Wright. Known as his “Bootleg Houses,” Wright designed eight houses between 1891-1892 while under contract with the architectural firm Adler and Sullivan. The Thomas H. Gale House is one of Wright's most well-known Bootleg Houses, as it boasts clear transitional evidence of his development of the Prairie style of architecture. Wright immediately left the firm upon Louis Sullivan’s discovery of his commissions and began his solo career in 1893. 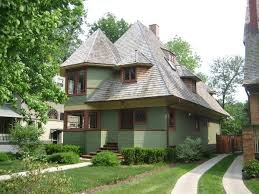 Frank Lloyd Wright began his architectural career in Chicago, first working for Joseph Silsbee in 1887 then moving onto the architectural firm of Adler and Sullivan the following year. During the next year, the 22-year-old Wright married his first wife Catherin Tobin and constructed his now famous home with a $5,000 loan from Louis Sullivan in the up-and-coming Chicago suburb of Oak Park. Sullivan strictly prohibited Wright from taking on private commissions or working outside of the firm. However, Wright’s growing family pushed him to breech his contract and take on outside work. Between 1891 and early-1893, Wright secretly designed at least eight houses around Chicago, becoming known as his “Bootleg Houses.” Wright’s known Bootleg Houses are: the demolished Harlan House (Chicago), the demolished MacHarg House (Chicago), the Blossom House (Chicago), McArthur House (Chicago), Emmond House (LaGrange), Peter Groan House (LaGrange), Robert P. Parker House (Oak Park), and Thomas H. Gale House (Oak Park). Wright’s most famous and recognized Bootleg Houses are the Robert P. Parker House and the Thomas H. Gale House, mostly due in part to the houses being situated on the same block of Chicago Avenue as Wright’s home and studio.

On the surface, Wright’s Bootleg Houses may appear architecturally simple compared to his later works, but the significance of these houses’ rests on the visibly transitional nature their design, reflecting the development of his future Prairie style. While the Thomas H. Gale House in particular boasts common Queen Anne style features like an irregular, high-pitched roof and asymmetrical massing, Wright began introducing elements of his own architectural theory. For instance, the Thomas H. Gale House features overhanging eaves, horizontal bands of windows, and an emphasis on the rectilinear that would later become defining features of Prairie style architecture.

By early-Spring 1893, it is said that Louis Sullivan stumbled upon one of these Bootleg Houses, recognized it as Wright’s work, and dismissed Wright from Adler and Sullivan immediately. Wright understood his new-found freedom as an opportunity to begin his own architectural firm, so he began taking commissions. Many architectural historians consider Wright’s Bootleg Houses as one of the most pivotal periods of his career as it depicts the development of his Prairie style of architecture.