Africa also known as little Africa is an area in Jacksonville, IL during the 1800s where the African American population primarily lived. It was a small community that is on W. Beecher Avenue ( Was College St then), Anna St. and S. Church St. The population of the residents in Africa was low but later grew to 156 residents in 1860. Many were former slaves and aided freedom seekers headed north. 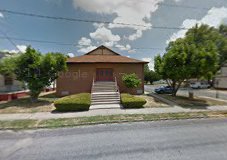 In the 1800s a small community was founded in southern Jacksonville, IL where the African American Population lived. This community was later named Africa or little Africa because of it. Little Africa was located on W. Beecher Avenue( was known as College St), S. West St, Anna At., and S.Church St. The population was always small in Little Africa but grew to 156 residents in 1860.

Many of the residents were former slaves that started a new life in Illinois. And many of them helped aid "freedom seekers" also known as runaways who were on their way north. In order to achieve freedom from oppression. And to obtain more safety and security from their oppressors in the south.

Central to Little Africa's community was Mount Emory Baptist Church. One of the most influential people who advocated for Mount Emory baptist Church is reverend Andrew W. Jackson who was a local barber who took over as the pastor of the church in the late 1840s. Due to his position he became a spokesman for the church and Black Jacksonville. He also helped found a second Black church in 1846. Which was the African Methodist Episcopal. Both churches relied on financial help from the good will of wealthy whites in Jacksonville. Which they received help from as Jacksonville was one of the more progressive cities in Illinois as it had a strong New England influence.