The Gillett House is named in honor of one of its first owners, Dr. Bezaleel Gillett, and dates back to the 1830s when Gillet acquired the property from its previous owners. Gillett was an abolitionist as well as a physician and leading local merchant in Jacksonville's early years. Gillett was also one of the founders of Trinity Church, Jacksonsville's first Episcopal Church in 1832 and one of the original trustee of the Jacksonville Female Academy founded in 1830. The house dates back to the is now owned by Illinois College. 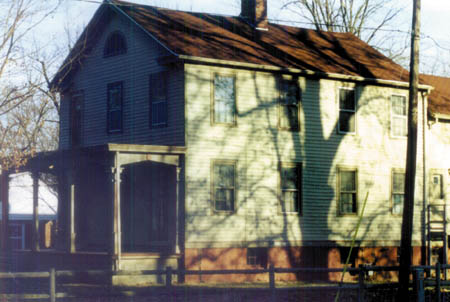 Prior to May of 1833, Jospeh Duncan and his brother-in-law Matthew St. Clair owned this property. Benjamin Allyn purchased the home from Duncan and his family lived in the house for the next five years. The Allyns sold the house through their attorney William Thomas to Abraham Clark for $3,500. On that very same day, Abraham Clark and his wife sold the whole property to Dr. Bezaleel Gillett for $4,550.

Dr. Bezaleel Gillett was one of Jacksonville's earliest physicians and operated from this home which included his office and waiting room. He was a leader in his church and a member of several boards of trustees in addition to supporting the Underground Railroad. According to several accounts, Gillett quartered fugitive slaves in a large shack south of the house that has since been demolished. For example, local sources have preserved the story of how Gillett helped eight fugitives slaves who arrived at this home in a wagon. A fellow abolitionist known as "Mr. James" reportedly came the very next morning to help these eight people escape to Canada where they would no longer be in danger of capture and re-enslavement. According to the story passed down by fellow opponents of slavery, one of the enslaved persons noticed his former owner on the train but was able to remain undetected.

The Gillett House was one of the largest in the growing community and the location of elegant parties that were attended by many of the leading families of Jacksonville. The center of the house featured a large chimney designed to heat the entire home which featured elements of New England colonial architecture. The main entrance hall allows for natural light that would have welcomed guests and patients. Demonstrating Gillett's passion for education, the home also held a large library.