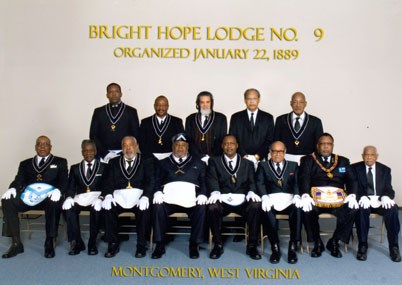 Bright Hope Lodge #9 helped shape the African American identity in the community and gave them a way to join and band together. The lodge did this by practicing rituals of brotherhood and aimed to help members of the community against hardships that they had the potential to face, such as poverty and discrimination.
Before welfare and other government aid programs were established fraternal organizations such as the Bright Hope Lodge were established to help the poor in Black and white communities such as Montgomery, WV. They collected membership dues in which were used to help aid the poor, unemployed, orphaned, and widowed. They would also help with providing burial funds for families who could not afford proper burial services. The first Black Masonic lodge was founded by Prince Hall and fifteen African American men in Boston, Massachusetts. They requested permission in from the white Amercian Lodge members to establish a chapter of Black members, but were denied. However, in 1887 the petition went to the grand lodge in England, and was honored and a charter was granted.
There was an influx of African Americans in the late 19th century until the early 20th century which brought about a consistent increase in the making of fraternal African American organizations. Also, steady employment of railroads workers and coal miners made it easier for workers to pay out and get involved with fraternal societies.
Bright Hope Lodge was organized on January 22, 1889, in Coal Valley, West Virginia which would change to be Montgomery, West Virginia. Originally the official name was Bright Hope Lodge #12 and meetings were held in the first Lodge Hall, built on Third Avenue in 1890. The lodge experienced significant growth in the 1890s but in the early years of 1900, the Great Depression brought forth a decline in membership. In 1946, there was a merger of two lodges to help bring back life to the Bright Hope Lodge #9. This transformation took place while the lodge was under the leadership of Worshipful Master Joseph R. Lawrence, Sr. The current Lodge Hall was built in 1962. The organization is sustained by Membership dues and fundraising activities that also support lodge functions, and address community needs. Its revenue is about $110,000 per year.
The sister organization of Bright Hope Lodge # 9 is Naomi Chapter # 10 Order of the Eastern Star. It was established in 1920. At that time, they operated under the leadership of Lucy Hodge, Together with their lodge brothers, they support and participate in functions and events within the organization and the overall community. The organization has awarded scholarships to students, provided food for the hungry, worked with senior citizens and domestic violence programs in the area, and supported NAACP initiatives and research projects associated with health issues. In the process of creating social connections for themselves and helping others, the organization has gained significant respect and support from community residents, businesses, and legislators of Fayette County.