On July 8, 1947, in Roswell, New Mexico, reports indicated that an Unidentified Flying Object (UFO) crashed into a field. Some believe that the government attempted to cover-up an extraterrestrial spacecraft. Other believe that the the UFO hysteria.was unfounded and refer to the incident in Roswell as "the world's most famous, most exhaustively investigated, and most thoroughly debunked UFO claim" 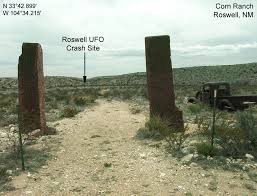 On July 8, 1947, in Roswell, New Mexico, an Unidentified Flying Object was found crashed on a local farm. The military, not wanting to state that the UFO was truly a nuclear test device used to identify Soviet nuclear activity, released a statement concluding that the UFO was a weather balloon. Although there were uneasy stirs from the community about what this object really was, it quickly faded from newslines and things in Roswell wwent back to normal. During the 1970s, with space travel a big topic and whether or not life could be on other planets was a big deal and a mass UFO hysteria broke out. Anything that wasn't readily identified on the.spot was considered some sort of alien travel device. In 1978, UFO researchers Stanton T. Friedmont, William Moore, Carl T Pflock, Kevin D. Randle, and Donald R. Schmitt interviewed several hundred people that supposedly had ties with the Roswell incident. They concluded that an alien craft did in fact crash at the farm site in Roswell and was covered up by the military. Whether or not these findings hold any kind of truth or the.people interviewed were credible remains unclear. Roswell remains in the.news and media to this day, with many shows and movies such as the self titled TV show Roswell, and the 1994 made for TV movie also titled Roswell, help keep the.story, myth or fact, alive.