Clark County Museum is a 30-acre property that features a modern exhibit hall with a timeline exhibit about southern Nevada from pre-historic to modern times. Visitors can walk the Heritage Street of restored historic buildings that depict daily life from different decades in Las Vegas, Boulder City, Henderson and Goldfield. 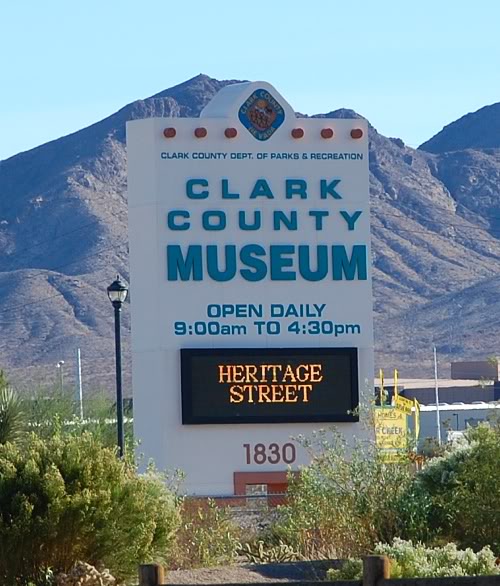 Heritage Street features structures from the 1910s to the 1970s and includes the 1932 Boulder City train depot, a 1918 Union Pacific steam engine and caboose. The property is home to a recreated Ghost Town and Mining Trail, providing a perspective on pioneer life in the hot and arid Southwest environment.

The motor court and trailer on the property recognize the bust and boom periods of local history, when post World War II housing was unable to keep up with growth in southern Nevada. The Donald Worthington Reynolds print shop, named after the late owner of the Las Vegas Review Journal newspaper, exhibits early printing presses and newspaper equipment from the 1890s to the 1940s.

Reflecting a major business in Clark County, the Museum also includes the Candlelight Wedding Chapel, previously located on the Las Vegas strip. Albums inside the chapel include images of weddings that were held in the Candlelight when it operated on the strip.