The Delaware Gazette, founded by two ministers in 1818, is the longest family-owned newspaper in the country. Although it is located in a small town, it has persisted where many other papers have failed. Through years changing ownership and going through different phases of technology, the Republican newspaper reported on country-wide stories and smaller, more localized news.

This is a real newsboy's bike donated to the historical society by a Delaware local. 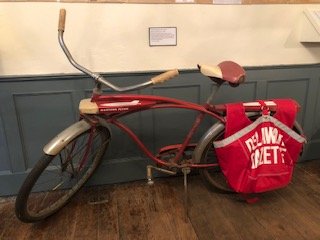 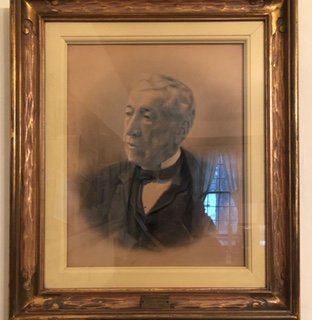 This box would have been owned by a family for the delivery person to put the paper in for safe keeping against the weather. 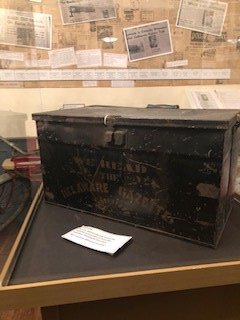 This is the old Gazette office building. It was the only one built specifically for the paper itself. 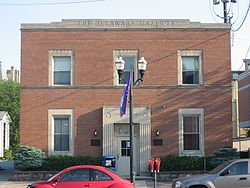 Delaware is a small-town suburb of Columbus, Ohio. It was founded in 1808 as a result of authorization by the state government. Ten years later, in 1818, the first local newspaper was started. Two popular ministers in the area, one Baptist, Joseph Drake and one Presbyterian, Joseph Hughs, were its founders. The Delaware Gazette most likely possessed many religious overtones as a result of its first owners. During this period of the paper’s existence, news traveled mostly by word of mouth and mail. So pre-Civil War, when major newsworthy events were taking place overseas, American newspapers (such as the Gazette) would not get word until weeks or months later. Luckily, years later, the paper would share a building with a telegraph operator. So, they received printable, newsworthy information very quickly. However, the two founders of the paper lacked the skill and funding necessary to keep a paper running for a substantial length of time. After a few years, it was time for a change.

In 1921, a man by the name of Griswold came along. He was previously running a paper in Franklin county, but also struggling to keep it alive. The two papers merged to form the Delaware Patron and Franklin Chronicle. This time around, in order to stay in business, Griswold came up with a new plan. All housed in one building would be a tavern, an inn, and a print office. The tavern and the inn always brought in fresh news, making it easier to get stories from the city of Columbus quickly and they were also a good source of income. This was especially important at this time because newspapers lacked advertising. Running ads is a huge way that newspapers these days stay in business, but back in the 1820s, papers were just packed full of the news and nothing but the news. By the 1830s though, another man, Sharp, had come along and bought out Griswold. He renamed the paper the Olentangy Gazette.

In 1843, after Sharp had been in control of the paper for quite some time, a man by the name of Abram Thomson purchased it from him. He then proceeded to change the name back to its original, the Delaware Gazette. He ran it until he was able to pass it on to his son. The paper continued in their family, passed from father to son, for 161 years. At the time it was finally sold in 2004 to Brown Publishing Company, it was the longest family-owned paper in the United States. During that window of time, in 1897, the Gazette got its very own linotype machine. The new technology made it much easier to print news. Prior to this invention, printers had to lay out each letter by hand in order to write out the story. However, with the linotype machine, they could type what they wanted and the machine would arrange the letters in order to be stamped and printed.

Although the family possessed consistent ownership of the newspaper, there was one period of time during those years when one other man’s name made it on the list of owners- an Ohio Wesleyan student by the name of Lee. He had been working with the paper when he enlisted to go to the Civil War. Thomson requested that Lee be his war correspondent and so for some time the Delaware Gazette received news straight from the battle front. However, everyone was heartbroken to hear that Lee lost his life on the battlefield. They held a service for him and the other boys from the town of Delaware that gave their lives fighting. During the service however, in walked Lee himself! Often in the war, men would be deemed dead on the field on account of being so wounded they could barely breathe. Many of those men did die, but there were a few cases, such as Lee’s, when they could find help and survive. As a northern, Republican newspaper, the Gazette naturally supported the Union. In fact, when they got word of victory, they published a paper with the headlines “The Rebellion Crushed! Great and Glorious News! Lee and his Entire Army Surrendered!! Official Announcement!!!”

However, its Republican nature would later be challenged. In Delaware in 1884, there were five local newspapers. The Delaware Gazette was Republican, the Delaware Daily Chronicle was independent, the Delaware Signal was Prohibitionist, the Delaware Herald was Democratic as was the Democratic Herald.  Around 1900 the Democratic Herald was struggling. A major contributor to the paper was very ill and they knew they had to sell. They could not find a reliable democrat to sell to, so they sold to the conservative Delaware Gazette because of a previously discussed deal. The paper released a statement about becoming more bi-partisan/non-partisan because of this merger, but their readers did not take the news well, so it did not last very long. Today, the Delaware Gazette is the only local newspaper left in the area. It is currently owned by AIM Media and survives on a very limited number of subscriptions and lots of advertising. Although it is no longer standing in its previously glory, its mere existence proves the significance of the Thomson family and the devotion of the community to holding onto a local tradition.