The closest you will get to authentic southern soul food in the heart of New York. Fried chicken, ribs, greens, cornbread you name it. If you’re looking for sweet, falling off the bone ribs, crispy fried chicken and all the sides, pie as sweet as can be all in a low-key environment, Sylvias is the place to go! 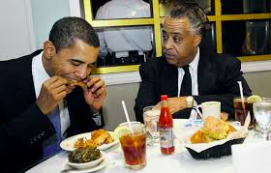 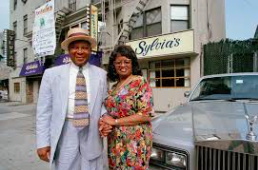 The best soul food you can get! 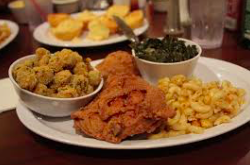 Soul food is an extremely popular and recognizable genre of cooking coming out of the United States. For centuries African Americans have been passing down their hearty and lavish recipes. If you’re like me, your mouth waters when around soul food. Just the idea of fried chicken, collard greens, cornbread, mac and cheese, etc., is enough to send me drooling over the menu.

Soul food has been known as a term used for food traditionally made by African Americans from the Southern United States.This fashion of cooking all began during the period of African American slavery. During this time enslaved African people were given leftovers and unwanted cuts of meat from their masters. Using these rations, the enslaved people preserved African food traditions and restyled traditional recipes with all that they were given.  After slavery, many of the African Americans were poor and could not afford the best cuts of meat. Farming, hunting, and fishing along with fresh vegetables were what they lived off of. “The intersectionality of African food preparations preserved, class status, laws that prevented equal access and innovative survival prevailed” (“Soul Food’ a Brief History.”). African Americans during this time period made do with what they had and because of their efforts today we get to experience and taste the wonderful Soul Food! (“Soul Food’ a Brief History.”)

Although soul food originated in the South, soul food restaurants ranging from fried chicken to fish “shacks” to the high upscale dining have been established in every African American community across the nation. Such as Chicago, New York, New Orleans, Los Angeles and Washington DC (“Soul Food’ a Brief History.”).

“Soul food has a rich and important history that ties Black culture to its African roots, and that history is deeply reflected in the staple recipes and techniques” (“The Humble History of Soul Food.”). Four main ingredients have created this connection to America’s dark past and the enslaved Americans efforts to survive.

Many crops tied to soul food are key ingredients. During the middle passage, slave traders personally took multiple crops native to Africa and gave small portions of these foods to be available on the slave ships to keep the enslaved alive. Once making it to America, Enslaved Africans began to grow these crops on plantations. “The transport of the African variety of rice in particular through the slave trade arguably set the foundation for the most notable southern American culinary traditions” (“The Humble History of Soul Food.”). Rice is a major aspect in many African dishes. The enslaved Africans adapted their cooking while in America along with the food that was available to them. Similarities can be observed between jambalaya and jollof, a traditional West African dish (“The Humble History of Soul Food.”).

Okra is another key ingredient to soul food. It can be stewed, fired and even baked. Originating from Ethiopia, this vegetable has made its way through the Middle East, North Africa, and even South Asia all the was to the Americas by slave ships. Many today are most familiar by it being used in gumbo, a rich thickened stew containing either poultry and sausage or seafood (“The Humble History of Soul Food.”).

Pork has been the main choice of meat in the South for centuries. It all ties back to the strenuous roots of preserving the meat by salt and smoking it. The cheapest and unwanted cuts were to be left for food rations. The unpleasant tastes were masked by African cooking using several seasonings (“The Humble History of Soul Food.”).

And lastly the greens of soul food known as collard greens. During slavery, greens were boiled in pork fat and seasoned with whatever additional vegetables were available. The remaining juices left over known as “potlikker” was to be soaked up and eaten with cornbread. All a traditional dish in Africa (“The Humble History of Soul Food.”).

Today all of this history can be put together to truly enjoy an authentic Soul Food meal at the famous Sylvia’s Restaurant of Harlem, Queen of Soul Food restaurant.

“Queen of Soul Food”, Sylvia Woods launched the world famous Sylvia’s restaurant. Originating in the historical village of Harlem, this restaurant exemplifies generational history and tradition at its finest. Born and raised by her mother on their South Carolina farm, young Sylvia had the hopes and dreams of marrying her childhood sweetheart and trading in the cotton fields and southern vibes for the city that never sleeps. And so she did. While attending night classes after a full day of being a junior in high school, Sylvia managed to obtain her beautician’s license. She later opened the first farm house salon in her very own hometown, Hemingway, South Carolina. Heart set Sylvia did indeed marry her childhood sweetheart Herbert. Just a year apart they met when Sylvia was eleven and Herbert at age twelve while picking beans after school. Once married in 1944 the head strong couple began their journey, to the future of their dreams. She waitressed at Johnson’s luncheonette with several years of dedicated service. Employer, Mr. Johnson not only recognized Sylvias potential but as well as her entrepreneurial spirit. He sold her the luncheonette and she jumped on the opportunity with the help of her mother. The then small luncheonette having only fifteen stools and six booths then came to evolve into the great family-owned enterprise. All leading to Sylvia’s restaurant in Harlem, along with full-service catering hall, Sylvia’s catering and Special Events Division, a nationwide line of Sylvia’s food products, two cook books, and finally ATOC, INC., real estate holding company (Sylvia's Restaurant).

All together with its major success, this restaurant attracts clientele ranging from the Harlem locals to visiting celebrities. Celebrities who have dined at Sylvia’s consist of Bill Clinton, Nelson Mandela, Jesse Jackson, Magic Johnson, Barack Obama, Bernie Sanders and even Bruno Mars (Sylvia's Restaurant). Although Sylvia Woods and her husband Herbert passed away back in 2012 today the restaurant is owned and operated by her children and grandchildren. After her death, W. 126th Street and Lenox Avenue in Harlem co-named the street “Sylvia P. Woods Way”. “When you get an entire block named after you in New York City, you’re pretty much immortal. And Sylvia’s is about as immortal a restaurant as you’ll fund in New York City” (“Sylvia's Restaurant - Harlem - New York.” The Infatuation). The food is said to be incredibly satisfying and as good as soul food you’d find down south (“Sylvia's Restaurant - Harlem - New York.” The Infatuation). If you’re looking for sweet, falling off the bone ribs, crispy fried chicken and all the sides, pie as sweet as can be all in a low-key environment, Sylvias is the place to go!

“Sylvia's Is Named One of the Magnificent 10 Restaurants That Changed America.” Sylvia's Restaurant, 1 Aug. 2017, sylviasrestaurant.com/sylvias-named-one-magnificent-10-restaurants-changed-america/.